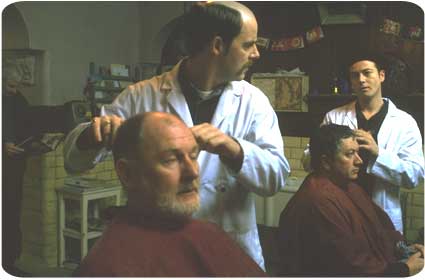 Filmmakers travel to Northern Ireland at great peril. It’s not that they risk their lives there: who’d waste good bullets on a film crew? No, the real danger is the aesthetic paralysis that inflicts outsiders who shoot in Ireland. Directors go there looking for a dose of harsh realism, then yield helplessly to the charming accents and gorgeous, hazy light. Whatever their intentions, their films slowly drown in a sludge of sentimental, self-conscious whimsy.

Barry Levinson’s An Everlasting Piece opens promisingly, with Talking Heads’ "Life During Wartime" playing over a montage of blasted Belfast streets. The sky is colorless and bleak. We settle on a long shot of a house, set adrift in the back of a huge, empty lot. The lot is bordered with an enormous fence and barbed wire. Handwritten notes appear onscreen to clarify: this is a Catholic home on the border of a Protestant neighborhood in the 1980’s. The sequence upends our expectations: the witty subtitles downplay the inherent pathos and menace of the war-torn neighborhood.

For its first few scenes, the film lives up to that opening. Barry McEvoy, the film’s screenwriter, stars as Colm, who’s starting a job cutting hair at a mental hospital. He’s the "new Catholic" in a staff of Protestants, most of them named Bill. He hits it off immediately with his partner, George (Brian F. O’Byrne), who sprinkles his rambling stories with snatches of poetry.

Just as the film seems to be tipping over into meandering cuteness, McEvoy and Levinson throw a rude, violent shock at us. The constant reminders of religious tension (who’s Catholic and who’s not seems to be the only topic of conversation) begin as a series of mild jokes, but this early moment reminds us of the stakes involved in every conversation here. The strategy is to keep us pleasantly engulfed in a warm fog of blarney until we get comfortable, and then to pull the rug out.

Soon George and Colm find themselves in a position to obtain the client list of "Scalper" (Billy Connolly), an inmate who once held the monopoly on toupee sales in Northern Ireland. A scheme is hatched: calling themselves "The Piece People," they set out to take over the industry, aided by Barry’s girlfriend Bronagh (Anna Friel). They’re canny enough salesman to make their reluctance to engage in the religious war around them a selling point. They’re not so much nondenominational as cynical: one of them jokes, "Have you ever seen a broke pacifist?" Their religious loyalties shift from sale to sale, since they’re unconcerned themselves.

It’s a smart setup for a comedy about situational ethics, but Levinson and McEvoy fail to deliver on it as the film goes on. This isn’t a failure of nerve: the story is driven by the consequences of the partners’ refusal to commit. Rather, the film relies so heavily on charm and shtick that it loses sight of the targets of its satire. Every scene ends on a punch line or a quick burst of sentiment. There is a fine scene late in the film, for instance, that’s bungled with a single shot at the end. Up to that point, the scene rigorously avoided cliche in its writing and acting. The final shot (and the musical segue into the following scene) manages to undermine in ten gushing seconds everything that preceded it.

The film begins as an attempt to deal with an impossible situation through comedy, but it settles instead for the broadest possible gags. For every sharply observed scene – Colm and Bronagh’s failed attempt to leave a theater as "God Save the Queen" plays onscreen, a tracking shot of the terrified faces of young English soldiers – there’s a protracted, silly bit of business with Scalper or another stale gag about Colm’s prudish aunt. Every character is too sweet by half (even the I.R.A. troops are bumbling charmers) and tedium eventually overwhelms whatever bite the opening contained. The film wants to be liked, and this is deadly for a political satire.

Levinson has done good work in the past. His debut feature, Diner, is a model autobiographical film, avoiding woozy nostalgia by focusing so intently and compassionately on its characters’ failings. They weren’t compendiums of cute mannerisms, they were people: selfish, pushy, sexist and sometimes a little stupid. Levinson never begged us to love them. Since then, he’s come more and more to rely upon his background in television sketch comedy. He’s a crowd pleaser now, more comfortable painting with broad strokes than risking the subtle detail that was his initial gift.

An Everlasting Piece ends by trying to please everyone. McEvoy is aiming big here, self-consciously offering a comic gesture of reconciliation. It’s naive to expect ninety minutes of comedy to make a dent in a struggle marked by centuries of enmity, but it’s also rather touching. Sadly, the film’s confusion is such that McEvoy’s brave bid for unity feels more like capitulation. It gets its laughs, but leaves us no closer to understanding the situation than when we walked in.