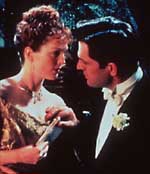 Oscar Wilde’s 1895 play, An Ideal Husband, was made into a movie in 1947 with a stellar cast. (Alas, we haven’t seen it.) Then, a Russian language version was made in 1980 which we wonder if anyone saw. Now Oliver Parker (Othello, 1995, the one with Laurence Fishburne) has "adapted" the play for a new screen version which he also directed. No doubt some purists will carp about the changes ("How dare he revise Wilde!"). In truth, the cuts seem judicious and the product on the screen is a delight.

If most of the Wildean mots are retained and well delivered, that alone would make it worth a look – like:

LORD CAVERSHAM: Can’t make out how you stand London Society. The thing has gone to the dogs, a lot of damned nobodies talking about nothing.

LORD GORING: I love talking about nothing, father. It is the only thing I know anything about.

Goring, played to perfection by Rupert Everett (who we thought was wasted in the current A Midsummers’ Night Dream), delivers such self deprecating lines with aplomb, letting you know all at once that 1) he doesn’t really mean it, but 2) he knows the listener knows he doesn’t mean it and 3) he is very sure of himself but 4) he’s not 100% sure of himself. All that in two seemingly simple lines. Great writing. Fine acting.

Goring is a close friend of Sir Robert Chiltern (Jeremy Northam), a distinguished member of Parliament and a rising political star. Chiltern is in the perfect marriage (to Cate Blanchett) while Goring, a bachelor, is pursued by Chiltern’s sister (Minnie Driver). Enter evil Mrs. Cheveley (Julianne Moore), a scheming opportunist who has uncovered an unfortunate piece of misbehavior in Chilton’s past and proceeds to attempt blackmail.

LORD GORING: I am sure she adores scandals, and that the sorrow of her life at present is that she can’t manage to have enough of them.

SIR ROBERT CHILTERN: Why do you say that?

LORD GORING: Well, she wore far too much rouge last night, and not quite enough clothes. That is always a sign of despair in a woman.

The attempted blackmail tests the character of each of those involved. The choices they make, as each decision is made in the unfolding scenario, change our perceptions of each of them and their perceptions of themselves as well as each other. By the end, it is not only the perceptions that have changed; the characters have each been changed by the events. That gives the play/film a depth of insight and understanding that makes it resonate beyond a particular society at a particular moment of time.

Even the lighter foibles of the period that are depicted, and provide the fodder for some of the best lines, seem to persist a century later:

LORD GORING: You see, Phipps, Fashion is what one wears oneself. What is unfashionable is what other people wear.

LORD GORING: During the Season, father, I only talk seriously on the first Tuesday in every month, from four to seven.

Parker uses his camera to good effect in illustrating some of these points. As Lord Goring dresses, and the excess of attention to dress and appearance in Society is lampooned, Parker gives us a series of shots of men and women in the ritual of grooming and dressing themselves. It provides an opportunity to open up the play a bit for the screen.

In the party scene, the camera swoops about the regal mansion, taking it in from different angles, adding movement where earlier generations of filmmakers would have remained more static and stage-like. There is a lovely shot, too, of whirling feet in shiny black shoes and the flowing skirts of the dancers as they waltz about the floor. This also seems to be the season for the Women’s Gallery at Parliament which we visit again here, as we recently did in The Winslow Boy.

The performances throughout are first rate. Northam is very different here from his appearance in The Winslow Boy, displaying a welcome variety in his characterizations rather than falling into too easy a pattern of mere personality and good looks. Blanchett is charming and displays a lovely vulnerability. The surprise is Julianne Moore, an American actress (Cookie’s Fortune, The Big Lebowski) who fits right in with a seemingly perfect accent and a facility for spinning out the Wilde lines with clarity and wit. She manages to leave a bit of humanity in an essentially hateful character. Only Minnie Driver seems out of her league in this group. In a minor role, Lindsay Duncan shines as Lady Markby.

It is, of course, an ensemble piece and the entire cast brings it together with skill and style under Parker’s skillful direction.