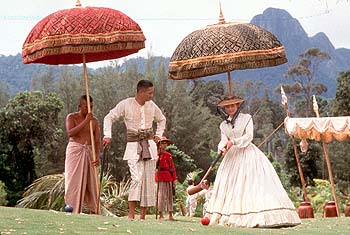 In 1862, an English widow named Anna Leonowens became court teacher to the enormous brood of Mongkut, the King of Siam. Her story, best known from the Rodgers and Hammerstein musical The King and I, is usually told as a celebration of colonialism: headstrong British schoolmarm teaches vain and childish monarch the virtues of civilization.

Anna and the King offers a far more complex version of the tale. More concerned with exploring cultural difference than demonstrating Western superiority, the film presents a Mongkut who is anything but childish. Here, he’s a Machiavellian tactician struggling to prevent his country’s colonization and willing to adopt Western mores only when they offer him an advantage. Mongkut doesn’t capitulate to Anna’s priggish scolding, as in The King and I. Her covert attempts to influence Siamese politics are circumvented, ignored or revealed as the disastrous miscalculations of someone hopelessly out of her depth. She doesn’t convert the heathen; outmatched and outwitted, she converts instead.

Chow Yun-Fat is extraordinary as King Mongkut. Best known in America as the brooding star of John Woo’s hyperbolic Hong Kong action films Hard Boiled, A Better Tomorrow, and The Killer, his range is in fact much broader than those performances might suggest. He’s a fine comic actor and a charming romantic lead. He’s often called the Chinese Cary Grant, but Sean Connery may be closer to the mark: Chow has Connery’s warmth and intelligence, his smoldering erotic presence, and above all his unflappable calm. He seems to float through Woo’s absurdist ultraviolence, impervious, smiling sweetly to himself as he kills everything in his path.

Since his move to the United States, Chow has been cast only in tepid imitation Woo films. He can carry subpar Chinese films on the force of his charisma, but until now, his dicey English has kept him straitjacketed. There’s nothing in the numbingly stupid The Replacement Killers or the mediocre The Corrupter that takes advantage of his talents: he’s just another action star in another pointless cop drama.

Mongkut isn’t just Chow’s finest American role, it may be his finest ever. He embodies all the contradictions of a man who is both king and god to his people. No other living actor could be so convincingly regal: he is both disdainful and compassionate, witty and somber, fiercely autocratic and doting. It’s a great performance, as good as any this year. One hopes it will establish him as an American star and allow him to stop wasting himself in formulaic action movies.

Anna and the King fails, however, to live up to his performance. It’s a smart, well-crafted film, with fine performances and – up until the silly final scenes – a script that never shies away from the thorny issues it raises. The problem is Jodie Foster’s mannered, brittle performance as Anna.

Chow and Foster make an odd pair. He may be the warmest, most sensual actor working today, while she may be the coldest. She is best at communicating intelligence and distance. From her earliest roles, she’s never been afraid of being off-putting. Anna is a role that should play to these strengths: she is a rigid, circumspect widow who ingratiates herself to an imperious monarch by sheer force of will. Yet Foster never claims Anna as her own. She seems hemmed in by her accent and her costuming: when she appears, near the film’s end, in loose hair and a dressing gown, she seems unfettered for the first time. Foster’s stiffness prevents us from engaging with the character, and keeps us conscious of her performance; for all her prodigious technique, we never forget she’s acting.

Anna and the King unwittingly pits a star against an actor, and the star walks away with the film.