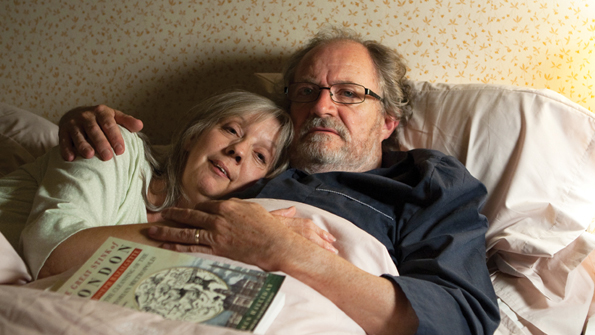 Early in Mike Leigh’s newest movie, we meet a depressed woman named Janet (Imelda Staunton) who has come to see her medical counselor Gerri (Ruth Sheen).
Everything about Imelda Staunton’s Janet is so despairing that her very body language rejects all hope. National Health be damned – Gerri gets nowhere with her. So what exactly is the matter with Janet? And why does Gerri’s husband Tom have to re-plumb the city sewage system? Oh, and why does their son Joe need to save immigrants from unfair evictions?

Yes, we are back inside Leigh’s flawed yet cozy world of British Boomer couples, offered at Leigh’s standard slowed-down-and-improvised pace. Jerri’s husband Tom (Jim Broadbent) is a geologist and 30-year-old Joe (Oliver Maltman) is a single legal aid lawyer. All three are working on the age-old question: how a good man or woman must live in order to be happy.

So what’s wrong with this picture? Does Mike Leigh loathe 21st Century England, or despise women, or just hate growing old? What’s happening to him?
You’ll ask yourself these and other puzzles after this misleadingly cozy and disquieting snapshot of everyday family life. We don’t learn new answers, but Voltaire’s famous advice from Candide about how to earn happiness comes to mind: “We must cultivate our garden.”

Another Year follows the still-happily-wed sixty-something couple throughout the seasons, as they work in their allotment, host friends, and see their family. They have meaningful work, a satisfying marriage, memories, a dutiful son, and happiness. They have homegrown tomatoes.

“Happiness,” wrote Voltaire, “consists of modesty, insouciance in the teeth of misfortune and accidents, and of developing and applying one’s talents… For when we work without thinking about what must be done, that gives all of us a role, and this results in a modest happiness.”

But Another Year is about more than just familiar Leigh-landia hodge-podgery in suburban gardens. It’s a profound meditation on the nature of happiness and its opposite, how to age well and contribute. As with a favorite Christmas pudding recipe, Leigh pops in the usual fruits and nuts. Yet a lingering pathos prevails, as if this pudding has been marinating in sorrow.

As we meet Tom and Gerri (pun intended) puttering around their allotment in the rain, we see this recipe works well. Simple pleasures help them to grow older gracefully. Tom cooks for Gerri every night, stirring a sauce made from homegrown tomatoes.

This marital bliss prompts them to offer hospitality to Gerri’s workmate Mary and Tom’s boyhood buddy Ken. Both are lonely, needy divorcees, with drinking habits that are becoming more and more pronounced.

As played by Leslie Manville, Mary is a mass of girlish ticks, delusions and insecurities, masked by inappropriate behavior. At one point she rebuffs Ken, and the next she throws herself at the much younger Joe. You want to take her round the corner and slap her silly. When she rudely snubs Joe’s new girlfriend, Katie, her stupefying lack of social skill is worse than irritating; it’s intolerable. She has gone too far. Yet Mary also reaches out to Tom’s widowed brother Ronnie, played movingly by David Bradley as a bereaved man stunned by his own son’s lack of feeling.

Mary’s neediness recalls the tragic women in Leigh’s Naked, whose behavior is endearing at 20, sexy at 30, infuriating by 40, suicidal by 50. At first she’s sympathetically lost. But soon she’s pathological. It’s as if the equally irritating and car-challenged Poppy in Happy-Go-Lucky had aged twenty years and suddenly gone off the deep end. Mary’s bottomless thirst for wine and love is a cry for help that Tom and Gerri ignore, as they fill her glass and put her to bed.

Sad-sack Ken (Peter Wight) is what Tom would have become had he not met Gerri, traveled, and found meaningful work. What are those other two sad creatures doing wrong, other than making foolish choices and drinking their heads off? Why do smug Tom and Gerri decide to punish them for their folly by dropping them?

Also rearing their heads inside the deep suburbia that Leigh’s Londoners inhabit are these baleful blights of modern London: mistreatment of immigrants, alcoholism, cruelty, sexual need, and loneliness. By the end, Mary arrives in a state of collapse to plead for Gerri’s forgiveness. Gerri finally hugs Mary, adding a bittersweet conclusion to a rather bitter film.

Some of Leigh’s targets are obvious. Whining and self-pity are two for starters, as well as (aside from a glass or two with meals) alcoholism, and lack of self-knowledge. Ultimately, what else?

And in Britain, Another Year became controversial after it opened at Cannes. Are Tom and Gerri parasitically feeding their complacency off their weaker friends? Do they need them to make their lives appear better – and are they partly responsible for their friends’ sufferings?

But finally that’s a Boomer-generation kind of quibble. We should all have such quibbles!