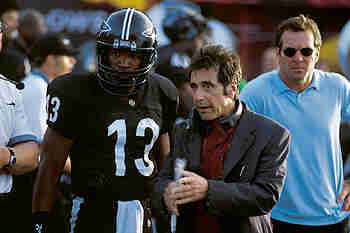 The ubiquitous trailer for Oliver Stone’s Any Given Sunday jostles vertiginous shots of bone-crunching football action against extreme close-ups of Al Pacino yelling, all set to a thundering hip-hop beat. It may well be the most chaotic, ear-splitting two minutes of celluloid ever to unspool on a movie screen. The movie itself arrives just in time for Christmas, and it’s exactly the same – except much, much longer. Only the strong will survive.

Never the most subtle of directors, Stone has met his match in the subject matter of his latest effort: professional football. Pacino stars as Tony D’Amato, head coach of the Miami Sharks. The film opens with the Sharks in mid-game against their arch-rivals, the Americans (Stone and co-writer John Logan have concocted an entirely unconvincing parallel to the NFL called the AFFA, complete with its Super Bowl equivalent, "The Pantheon Cup"). The director, leaving no doubt as to his agenda, shoots this opening sequence like the celebrated storming of Normandy Beach from Saving Private Ryan. Slow motion shots collide with whiplash camera moves, shifting film stocks and hyperreal sped-up action. Teeth-rattling Dolby sound effects bounce off the beat-crazy techno, rap and rock soundtrack. The message isn’t just in-your-face, it’s down-your-throat: The Gridiron Is A Battlefield. Football Is War. But the real battle going on here is the psychological warfare Oliver Stone conducts on his audience.

When aging quarterback Cap Rooney (Dennis Quaid) and his backup are both injured, D’Amato is forced to send in third-string benchwarmer Willie Beaman (Jamie Foxx). The skittish Beaman vomits as he takes the field, an action that becomes his trademark. Beaman loses his lunch at least three more times in the course of the movie, but who can blame him? This all-out assault on the senses is one of the most visually unpleasant Hollywood releases in years. Seasick close-ups and a blotchy, muddied color scheme are not exactly enhanced by the seizure-inducing editing technique. Stone’s mix-and-match approach was used to much better effect in JFK and at least the first half of Natural Born Killers. By 1997’s U-Turn it had become self-parody; by now it’s beyond ludicrous, and it renders what was already an overloaded narrative into fragmentary incoherence.

It’s not enough for Stone to make a football movie – he has to make The Football Movie. Every conceivable economic issue – from endorsement deals to taxpayer-financed stadiums to bonuses that reward individual accomplishment over teamwork – must be (ahem) tackled. The racial inequity of the game – where 70 percent of the players are black, but very few in management positions are – is also addressed, at one point offensively so. Cutting between black players in action on the field and white owners, coaches and referees looking on, while DMX’s "My Niggas" booms from the soundtrack, Stone clearly means to make a point (he always means to make a point). But the heavy-handed approach makes for a queasy screen moment. Does the Great White Director not see the ironic parallel to his own film and its corporate Warner Bros. overlords? Of course he doesn’t. And the less said about his treatment of female characters – all of whom are either whores, bimbos or ballbusters – the better.

Most offensive of all is the staggering array of sports movie cliches Stone and his collaborators have managed to stack, one on top of the other, as if building a bonfire. The quarterback past his prime. The coach who can’t cut it anymore. The young upstart with the out-of-control ego. How can the director expect the issues he raises about pro football to be taken seriously when the film’s resolution is so soggy with sentiments about teamwork and loyalty, and comes down to the same sort of high stakes, last-seconds-of-the-big-game-rah-rah we’ve seen a million times before? The manipulative cynicism of this display is simply jaw-dropping.

But on and on it goes. Famous faces drift through every scene – James Woods, Ann-Margret, Matthew Modine, Charlton Heston (!) – but they’re all lost in the cacophony and by the time they show up again, we’ve forgotten they were ever in the movie. These aren’t characters; they’re barely even types. Pacino carries the biggest load, and Stone brings out the actor’s worst instincts. He’s back in bellowing, spittle-flying Scent of a Woman mode, with his eyes continually drifting off to gaze at nothing in particular. The only player to emerge relatively unscathed is Jamie Foxx, who comes as close as could be hoped to portraying a flesh-and-blood human being.

The final insult is the film’s punishing length. There’s nothing inherently wrong with a three-hour movie, and running times should always be measured not in minutes but by the number of times you shift in your seat or check your watch. By either measure, though, Any Given Sunday is a behemoth, and as it lumbers past the two-and-a-half hour mark, you may well find yourself praying for sudden death.