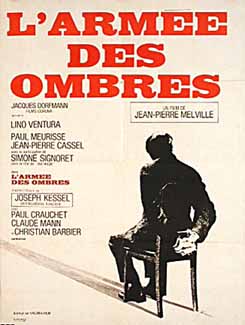 Army of Shadows, Jean-Pierre Melville&#146;s now legendary, noir-inflected meditation on French Resistance fighters, was based on the novel of the same name by Joseph Kessel. Melville, who had been a member of the French underground during World War II, read the book upon its publication in 1943. But it took him another quarter century to make his film, which was released in 1969. Fitting perhaps that it took another 37 years for Army of Shadows now to finally debut in the United States.

Army of Shadows received little attention when it was originally released in post-1968 France. The times–and politics–had changed; sympathy for De Gaulle&#146;s wartime exile leadership (from London) had greatly diminished in the new era of radical left sympathizers. Box office success in Vietnam War-era US ran either toward anti-war satire such as M.A.S.H. or conservative action-spectacles like Patton. The great news is, nearly forty years later, Army of Shadows holds up better than ever. Moviegoers familiar with Melville&#146;s work, such as Le Samourai or Bob le Flambeur, will encounter familiar thrilling territory. Above all, the epic Army of Shadows scintillates darkly as a study of the sublime ambiguity at the heart of existentialism.

In Army of Shadows it is an intellectual, the fictitious mathematics scholar Luc Jardie (Paul Meurisse), based on the actual Jean Moulin, who masterminds the shadowy French Resistance army. As the film opens, the Nazis are marching on Paris, Hitler&#146;s lapdog Petain will soon "rule" as Hitler&#146;s puppet from Vichy. The few true patriots, who will not bow to collaborationist pressures, must go deep underground to do their work, for anyone found to be a traitor to Hitler can expect to be tortured and killed. Army of Shadows soon reveals itself to be set in a mythical time, where the heart&#146;s yearning for freedom requires absolute precision of mental calculation&#151;desire needs reason to set it free.

As the film opens, Resistance fighter Philippe Gerbier (Lino Ventura) is imprisoned in a concentration camp only to escape (rather implausibly) shortly thereafter. He takes momentary refuge in a barber shop, allowing himself to be shaved &#150; the barber proves to be a Resistance sympathizer and aids Gerbier in eluding recapture. Gerbier works with a tight group of fellow saboteurs &#150; Francois (Jean-Pierre Cassel), Le Masque (Claude Mann), Felix (Paul Crauchet), Le Bison (Christian Barbier), and the matronly master of disguises, Mathilde (Simone Signoret), all average citizens quietly taking heroic-sized risks, ever aware any might buckle under the pressure and betray the others. All toil and sacrifice anonymously.

Strict adherence to hope in the face of inevitable despair and human imperfection&#151;a classic formula for noir&#151;is for these individuals the only possible response to their Nazi-occupied world. Melville underscores his meditation through cool low-key color lighting, the stylized, almost automaton-like movements of the actors, close-ups of revealing exchanges made through slight glances, the omnipresent tacit presence of danger, betrayal, death, the anonymity of the agents as they move through the shadows, knowing their own actions and fates will likely remain forever unknown.

At one point Mathilde is asked whether her husband is aware of her activities. She answers no, nor does her child. Later the audience learns Mathilde&#146;s single fatal flaw is her sentimental attachment to a photograph of her daughter. Similarly, when another resistance fighter who has become compromised, must be put to death, leader Luc Jardie comes out of hiding, allowing the man to see Jardie pass by in a car, to let the man know he will die, and that it is an act of honor. Melville&#146;s film imparts a visceral feel for the intense ambiguities of the shadow world these Resistance fighters inhabit. Taut, superb acting, narrative told by mood rather than action, the understated visuals, the elements of Army of Shadows merge to seep in under the skin and create an unforgettable and disturbing experience of men (and women, but mostly men) at war.