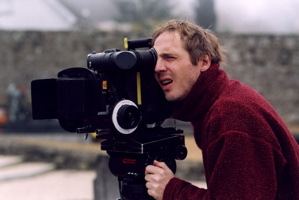 Arnaud Desplechin and The Cinema of Enchantment

Just in time for the holiday season, a holiday film unlike any other has arrived from France. Called, aptly enough, A Christmas Tale, it’s a marvelous feast cooked up by the incomparable Arnaud Desplechin, one of France’s most original directors working today.

Mr. Desplechin’s latest film has been well received at festivals and has spawned retrospectives of the director’s other works, notably the dazzling Kings and Queen (2004), and the tour de force that is My Sex Life…or How I Got Into an Argument (1996). In October, the San Francisco Film Society invited him to San Francisco to open their French Cinema Now series with A Christmas Tale. It was during this visit that I had the pleasure of spending a little time with him.

The first thing I noticed upon meeting the 48-year-old director was his boyishness. A head of disheveled hair that’s cropped short and thinning slightly (the only sign of middle age), and a wide, engaging and somewhat impish smile made me think that here is a man who has refused to let all the heavy stuff that comes with being a grown-up weigh him down. He looked happy. He looked as if he was in a room full of presents, and he couldn’t wait to open them. His enthusiasm is infectious, and his generosity seductive. He gave the impression that he was only too glad to share his presents with everyone else in the room.

This exuberance and generosity of spirit combined with an ardent love of cinema is an alchemy that has produced a director whose films are rich and encompassing. Mr. Desplechin is no minimalist. His films are complex, character-ridden, genre-mixing, and long (often well over two hours) entertainments that grab you by the throat and take you to a thousand different places of the mind and the heart. They are at once intellectual and entertaining, dramatic and comedic, reflective and boisterous, serious and screwball. Mr. Desplechin is a magician and his cinema is one of enchantment.

During our conversation, Mr. Despechin’s devotion to film was so obvious that I wondered if this man thought of life as anything more than a source of material for his films. Because they are so literary, both in their references to literary works and their extreme wordiness, I was curious to know if he had ever considered a writer’s career. “Never,” he answered emphatically. “I’m like a monk. If I dedicate my life to cinema, it means that I’m not allowed to write or do theater. I am committed to the screen.”

Mr. Desplechin has a zealot’s admiration for American movies, a typical characteristic of the Nouvelle Vague to which he must claim some kinship. He also has a special affinity for American movies of the 30s and 40s; the spirit of that era’s great sophisticated comedies runs through much of A Christmas Tale. There’s a revved-up, screwball intensity to the film, and in our conversation, Mr. Desplechin even compared the family’s mother and father to Claudette Colbert and Cary Grant. “Okay, they have four kids,” he admitted, referring to the characters of Junon and Abel, played by Catherine Deneuve and Jean-Paul Roussillon. “But they act like Colbert and Grant. They love each other,” he said, smiling. “They don’t need their kids.”

One of the criticisms of A Christmas Tale is how blithely it depicts the lack of maternal love shown by the character of Junon, the mother of the brood of adult children who have come home for Christmas. “For Catherine, perhaps it was a feminist issue,” Mr. Desplechin said in way of explaining Ms. Deneuve’s decision to play the controversial character. He went on to remind me that Catherine Deneuve became a woman and a mother in the sixties, when feminists challenged the idea that maternal love was instinctive, claiming it was a social construct that tied women to the home. “But for me, it was more than that,” he continued. “A woman is a woman, period. She is not a mother. The idea that a woman is a mother doesn’t interest me at all.” Junon’s brash attitude towards her children was Mr. Desplechin’s own faithful rendering of the fiercely independent Hollywood heroines who fascinated him as a child.

He also added that, above all else, Junon’s cold exterior and her un-motherly ways are, quite simply, meant to be funny. In Mr. Desplechin’s way of seeing, a mother’s indifference does not have to be unsettling; on the contrary, it can be liberating. Its honesty disarms us, and the effect is one of lightness.

In A Christmas Tale, Mr. Desplechin takes the bleak subject of cancer and builds a comedy around it. And then, as though cancer weren’t enough, he unleashes a panoply of other dark subjects—sibling hatred, family dysfunction, infidelity, mental instability, alcoholism, and the aforementioned maternal indifference—and puts them into the mix. It’s hard to know exactly how he turns all this darkness into light, but it must start with that generosity of spirit that immediately takes hold of you when you meet him.

Mr. Desplechin seems to have no use for ethics, or even for grief, for that matter. He prefers to accept people with all their flaws, to even look at these flaws as the key to their humanity. And the pain of grief and regret is also beautiful in its way. It’s as though everything he sees, he finds ways to adore. And the more unsavory it may be to some, the more adoring he is. This generosity of spirit is what allows him to find joy in the most unlikely places. His films are acts of forgiveness and acceptance. They show us that life is both cruel and wonderful.

When I asked him who his favorite directors were, Mr. Desplechin mentioned Wes Anderson, and the attraction seems fitting. Like Wes Anderson, Arnaud Desplechin blends comedy and melodrama in such original and unforeseen ways that it leaves viewers exhilarated. “Let’s get rid of melancholy,” he has said, and that is exactly what his films do.