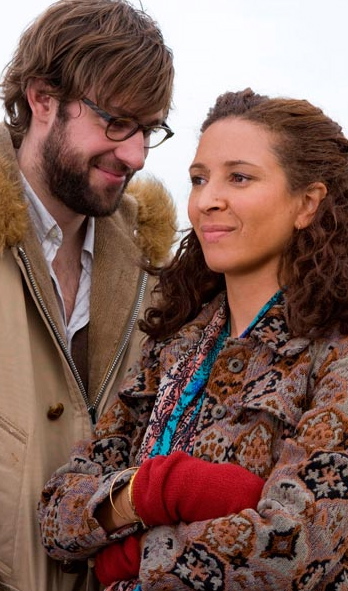 Sam Mendes’s last film, Revolutionary Road, was a study of marital dysfunction and self-destruction; one could say the same for his first film, American Beauty, that scathing satire of marriage that earned him an Oscar nomination and catapulted him to fame.  With Away We Go, Mendes has fallen through the rabbit hole and discovered connubial bliss.  The two protagonists of this quirky road comedy, Burt and Verona, are about as far away from George and Martha as you can get without going straight into Wonderland.  In fact, they are so good together, so “copasetic,” that it made me feel somehow…deprived.

Still, there is satire to be found even down the rabbit hole.  It’s just not focused on the perfectly healthy relationship between Burt and Verona (aka John Krasinski and Maya Rudolph), but at the imperfect world around them.  Heavily pregnant with their first child, Verona suddenly feels the nesting urge to relocate, so off they go on a picaresque journey that takes them from one satirical look at dysfunction to the next-namely Phoenix, Madison (as in University of Wisconsin), Montreal, and finally Miami.  It turns out you can find something to mock anywhere you go.  The soon-to-be parents spend nearly the film’s entire running time witnessing the foibles and follies of the various friends they visit as they travel the country in search of a new home where they can settle down and raise a family.

What appears at first glance to be a romantic comedy turns out to be something else entirely.   Burt and Verona find themselves going through a rabbit hole of their own, right into the belly of a farce about parenting.  Any dramatic tension that may lie underneath the relative bliss of this romantic couple gets short shrift because of this diversion of attention, but the farcical element does bring Away We Go its biggest laughs.  Allison Janney is hilarious as a brassy former Chicago executive now brassily living a dull, suburban life in Phoenix with a borderline psychopath of a husband and two sullen teenage kids.  Maggie Gyllenhaal steals the movie with her outrageous send-up of an uber-mom who practices the three esses of parenting-no separation, no sugar, no strollers-with such New Age zeal and self-righteous superiority that she leaves our perfect couple standing by in horror, and the audience rolling in the aisles in stitches.

Away We Go was written by Dave Eggers and his wife Vendela Vida, a literary couple who have both found fame in the world of alternative publishing.  I’m not sure what made them decide to write a screenplay together (they are both novelists), but I can see after watching this misguided jumble of genres and styles that they’re new at this, although I bet they had a lot of fun throwing ideas around while sitting around their living room.  I’ll also wager that it is their relationship we see on the screen.  At least, I can see a lot of Dave Eggers in Burt.  Eggers wrote a funny and touching memoir, A Heartbreaking Work of Staggering Genius, and in it, he comes across as a really great guy.  He’s in touch with his emotions, he’s open and giving, he’s funny and endearingly self-mocking-a truly lovable guy…like Woody Allen, only cuter and without the neuroses, or the sexual deviance.

Burt is equally lovable, emotionally available, and cute (even under the glasses, the mop of hair and the massive beard).  John Krasinski tends to go overboard with the overly optimistic, puppy-dog quality, which sometimes makes Burt seem a tad too immature, even slightly Keatonesque in his child-like innocence (a borderline turn-off), and consequently makes Maya Rudolph’s interpretation of Verona come across a bit too controlling, too self-important, too “mama-knows-best.”

Even so, Burt is a keeper, and Verona knows it.  The movie is at its best in showing these two intelligent people express their love and consideration for each other.  Even Verona admits without a hint of smugness (though I wonder about David and Vendela): “No one’s in love like us, right?”  Her good fortune might trigger the rancor of those viewers who never met a Burt in their lives (or who never were a Burt), but for those thirtysomethings out there still living in hope, Away We Go is the blue pill they’re looking for.