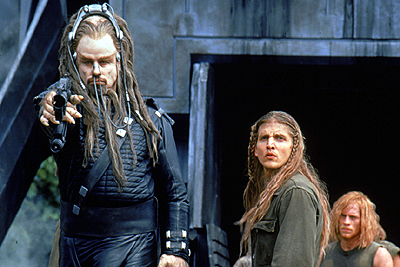 In a crucial moment near the climax of Battlefield Earth, a ragtag band of humans, having escaped their alien overlords, make their way to the Ft. Hood Army base in Texas. These "man-animals" (as the aliens call them), who have been living a barbarian-level existence up to this point, stumble upon a Harrier jet training simulator and, in a few short days, teach themselves to fly the jets and use them in battle against the alien oppressors. Strangely enough, the movie Battlefield Earth itself was assembled by a ragtag band of aliens who stumbled upon an abandoned Hollywood studio and, in just a few short days, taught themselves the rudiments of screenwriting, filmmaking and editing.

At least, that’s my best guess. What else could account for this unholy mess of a sci-fi extravaganza, so muddled and mindless it makes David Lynch’s much-reviled Dune look like a model of coherence and crisp storytelling? Based on the gargantuan pulp novel by Dianetics guru L. Ron Hubbard and brought to the screen through the single-minded efforts of its star, John Travolta, Battlefield Earth is a disaster on every conceivable level. It will no doubt take a place of honor in the proud pantheon of "What Were They Thinking?" cinema, right alongside The Postman and Howard the Duck.

Subtitled "A Saga of the Year 3000," the story unfolds on a future Earth that has been decimated by the evil Psychlos, ten-foot-tall aliens with dreadlocks and furry paws. Travolta plays Terl, the Psychlo chief of security, and Forest Whitaker (looking like a cross between George Clinton and the Cowardly Lion) is his second-in-command, Ker. When Terl’s expected promotion fails to come through, he and Ker secretly enlist a band of enslaved man-animals to mine for gold in the Rockies and bring the untold riches back to them. In order to accomplish this, Terl must teach one of the humans the Psychlo language (whenever the aliens speak it in the film, it sounds like they’re gargling with their own vomit). He chooses Johnnie ‘Goodboy’ Tyler (Barry Pepper), the most rebellious of the man-animals. Needless to say, this proves to be Terl’s undoing.

Visually, Battlefield Earth follows the strategy laid out by big-budget summer movies like Batman and Robin and Godzilla: shoot everything in complete darkness and edit with a food processor, so no one can tell what’s going on and the action will be a chaotic blur (thus simulating actual excitement and suspense). Bottom-of-the-barrel visual effects dominate. Early in the movie, Johnnie and his merry band discover the ruins of our civilization – or, more accurately, they discover some bad matte paintings left over from Beneath the Planet of the Apes. And the Apes similarities don’t end there. Much of the so-called humor revolves around the Psychlos’ contempt for the "stupid humans", and shameless screenwriter Corey Mandell resurrects such hoary chestnuts as Terl’s observation that dogs must be in charge of the planet, since man-animals chauffeur them around and clean up their droppings.

Travolta gets the lion’s share of awful dialogue ("You are out of your skullbone!" "I’m a Psychlo of my word."), but he doesn’t seem to mind. He struts through the movie like it’s a private joke only he is in on (and maybe it is). His mincing mannerisms, girlish giggle and reedy, sing-songy line readings don’t exactly inspire terror – Scooby-Doo villains have more depth. It’s a terrible performance, but Travolta comes off as the only actor who’s convinced himself he’s having fun.

And why not? Battlefield Earth is, after all, Travolta’s baby. He spent years trying to bring Hubbard’s novel to the screen, amassing box office clout until it became an offer Hollywood couldn’t refuse. Travolta’s longtime ties to the Church of Scientology (Hubbard’s brainchild) raised concerns among some that the movie would be a piece of religious propaganda, loaded down with Dianetics philosophy and hidden messages. It is to laugh. Anyone who can find any semblance of a lucid system of beliefs in this murky turkey is looking too hard. The only message audiences are likely to take out of Battlefield Earth is, "I want my money back."