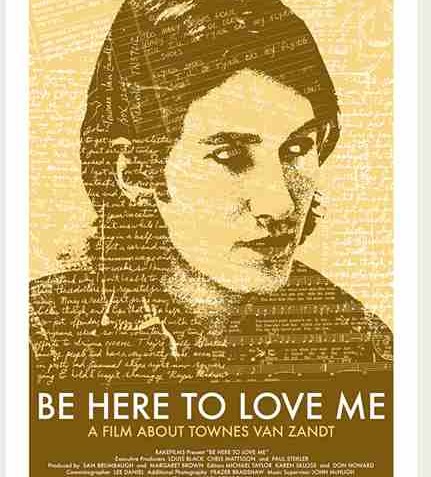 Perhaps it&#146;s fitting that Townes Van Zandt never fully broke into the big time. Had he made it as big as Johnny Cash, there might be some splashy, gin-soaked Oscar-bait biopic starring Justin Timberlake hitting theaters this season, rather than Margaret Brown&#146;s affecting, nicely scaled documentary. Cash himself, had he lived to see his own story brought to the silver screen with such fitful torpor in Walk the Line, might well have wished for less crossover success. Be Here to Love Me is small enough to please the cultists who adore Van Zandt as one of the greatest songwriters of all time&#151;Steve Earle asserts that he&#146;d &#147;stand on Bob Dylan&#146;s coffee table in his cowboy boots&#148; to declare him the best ever&#151;while its subject is fascinating enough to warrant any expanded fan-base.

Even among the major figures in Outlaw Country, a genre where hard living and easy dying are championed as virtues, Van Zandt is spoken of in a hero&#146;s whisper. Brown&#146;s talking heads, which include the likes of Kris Kristofferson, Willie Nelson, and Earle, repeatedly call him a "songwriter&#146;s songwriter," and country legend Guy Clark prefaces his testimony with a shot of tequila in tribute to his old friend. One can imagine Townes admiring the gesture.

As music casualties go, Van Zandt was a muted one. His death (in 1997, at the age of 53) seems both a foregone conclusion and a dark fate he managed to avoid for a while. Never far from substances at any point in his life, they were as much a part of him as was his songwriting genius. Brown weaves together audio footage and taped interviews that show a man whose proximity to death had calcified into a sharp blade of self-deprecating wit. In 16mm footage shot in the 70s, Townes first shows up triple-fisting Coke, bourbon and a rifle. He later rattles off a litany of near-death experiences, mostly involving overdosing on airplane glue, including one instance where he actually lay dead for an hour and a half before doctors revived him. But the same harrowing experiences he sought in life&#151;he once dropped himself from a fourth story balcony to know what it felt like to lose control&#151;also inspired the haunting lyrics that drive his music.

Like many of the best hard travelers, Van Zandt&#146;s restlessness was borne of rejected entitlement. The scion of a wealthy Texas family, his depression landed him in the Galveston psych ward where insulin shock treatments blanched out much of his childhood memories. His first wife connects his progressive detachment with his increased songwriting output: as a newlywed, she was expecting love songs&#151;instead he gave the world &#147;Waitin&#146; Round to Die.&#148; In the film&#146;s most moving sequence, Townes plays that song in a friend&#146;s home in Austin, while behind him an old black cowboy can be seen breaking down in tears.

In an interview, Van Zandt explains walking away from his first marriage&#151;he would have two more&#151;in favor of the rambling lifestyle. &#147;I realized I could do it, but it&#146;d take blowing everything else off.&#148; Brown&#146;s documentary lays the audio material over reams of lush b-roll and flare ends. The effect somehow manages to capture the disconnect between the songwriter and the public. Fame and monetary rewards eluded him while he was alive, until Willie Nelson and Merle Haggard&#146;s cover of &#147;Pancho and Lefty&#148; set him for life. Whether appearing on cheesy country music variety shows or in goofy home movies, Van Zandt always comes off as awkwardly obliging. It&#146;s as if he sensed a day when such footage would be necessary to his legacy. His old friend Guy Clark gets the last laugh at Townes&#146; funeral, quipping that he &#147;booked this gig thirty-seven years ago.&#148; Be Here to Love Me proves it was all for the sake of the song.