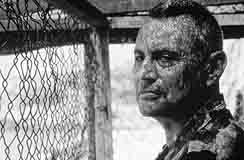 Claire Denis, talking about her new film, Beau Travail, is so unassuming, so understated and matter-of-fact, that the listener might be misled to think the product is less than a carefully thought out, very deliberately worked piece of cinema. "It is a strange film," she says. Yes, but not only strange – original, interesting, complex, and demanding.

Denis mentions the extremely tight budget and limited technical resources with which the film was shot, but her fecund imagination and masterful directorial skills don’t let those constraints appear on the screen. Visually, Beau Travail is rich in telling imagery, stunning settings, and powerful contrasts.

Commissioned to make a film on the broad theme of "being a foreigner," Denis, who was raised in French colonial Africa, was drawn to an African location and chose Djibouti, a former French territory, lodged between Ethiopia and Somalia, where the Red Sea spills into the Gulf of Aden. The location provided a variety of stark desert landscapes, often in combination with very blue seascapes. The French Foreign Legion – or at least, Denis admits, the popular cultural idea of the Legion – was a second element in piecing together the elements of the film. Melville’s Billy Budd was a grafted-on literary source, but is used, in truth, in a very limited way.

Narrated in voiceover by the central character, Sergeant Galoup (Denis Lavant), Beau Travail uses minimal dialogue in telling a story that is simply plotted, but complicated in overtones and undertones, much of which is provided by subtle suggestion and richly ambiguous imagery. Running throughout like a leitmotif are shots of the squad of legionnaires in rigorous exercise and military training exercises, as well as attending to the daily rituals of laundry, bathing, shaving.

The exercise sequences are highly choreographed. How closely they may relate to actual military practice is beside the point; when Denis has the squad standing in place, individuals facing in different directions, arms stretched out above their heads towards the blazing sun as if in worship, she suggests a connection to an at once nurturing and threatening environment, a connection to primeval roots of the human race. An exercise in which two men warily eye one another as they stalk in a wide circle speaks visually of competition and self protection. Paradoxically, this very conflict resonates with the connectedness of the adversaries. Whether engaged in yoga-like movements, or crawling under barbed wire, or traversing rope like high wire artists against the tropical blue sky, Denis mines the images of these lean, hard, half-naked men to make her points. Accompanying much of this footage with music from Britten’s Billy Budd adds intensity and a further ritualistic strangeness to the mix.

Into the status quo enters a newcomer, Sentain (Gregoire Colin), who proves to be popular with the other men and with the commander, Bruno Forestier (Michel Subor). Galoup’s jealousy is aroused, and with the inevitability of Greek myth, the events unfold. The script throws in a passing line to the effect that Subor has been dogged by rumors, but the rumors are unspecified. His admiration for Sentain is expressed indirectly, verbally, but nothing happens between them. Still, through it all, the subtext of homoerotic love is palpably present, a given of the situation which remains unarticulated.

There are sequences, as well, of the men in town, largely nighttime scenes in a local discotheque, where the men mix with local black women. The music and dancing are charged, but the sexuality is largely implied. A brief scene nicely establishes Galoup’s tender relationship with his woman. The relationship of blacks to whites and the place of blacks in the colonial setting is otherwise left unexplored, aside from a variety of images of the natives quietly going through their day-to-day lives in the austere environment. The latter strongly contrasts with the legionnaires’ style of defying the same environment, with their grueling exercise under the hot sun, their fitted and primly creased uniforms challenging the heat and humidity.

In telling her story, Denis, through incidents and imagery, offers more to think about in her disciplined ninety minutes than other directors manage in twice the time. The former Russian soldier who has joined the Legion complains of having fought for an ideal that kept changing, while Subor, the ultimate professional soldier, claims no ideals at all. He, though, is addicted to kat, the narcotic leaf that the natives chew. The idea of the Legion as family, variations on themes of competitiveness (combat, games of chess and billiards) and the ever present questions of life, death, and mortality are offered in a rich mix, an object lesson in thoughtful filmmaking.