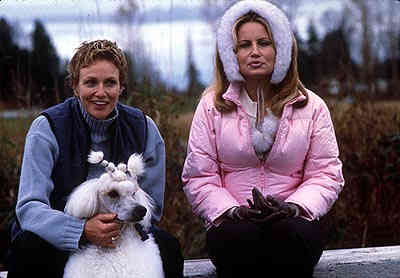 Christopher Guest specializes in people who, desperately needing to feel like somebody but lacking legitimate talent, impersonate achievers. They&#146;re karaoke singers. Best in Show is a "mockumentary" (a form that itself is ripe for lampooning) about a cross-section of American types in the days leading up to and through the prestigious Mayflower Dog Show. There&#146;s a nerdy salesman (Eugene Levy), his live-wire wife (Catherine O&#146;Hara) who can&#146;t escape her promiscuous past, a mopey redneck (Guest), a neurotic yuppie couple (Parker Posey and Michael Hitchcock), a tony gay couple (John Michael Higgins and Michael McKean), and an Anna Nicole Smith knock-off (Jennifer Coolidge) who uses her ancient husband&#146;s money to hire a ringer in the form of a professional dog-handler (Jane Lynch). The kennel club president (an underused Bob Balaban), the show&#146;s pompous chairman (Don Lake), and two mismatched announcers (Fred Willard and Jim Piddock) putty in the cracks between the main characters&#146; stories.

All these people are seeking personal validation through the dog show, and they live in a narrow world that extends about three inches from their noses. That&#146;s the movie. Best in Show is just a series of blackout skits in which the characters unwittingly hang themselves with comments that time and again make you think: "What an idiot." You keep waiting for some real meat in the satire, or for the characters to meld together into a unified storyline&#151;you keep waiting for the movie to start. It never does, though, and it&#146;s a letdown when you realize the only thing at stake is which contestant will win the main prize&#151;the Best in Show. Once that&#146;s settled, the movie limps home with an epilogue that sticks out like a white flag.

Why make a movie when you care so little about your story that you don&#146;t develop any of the ideas in it? When Levy and O&#146;Hara check into their hotel, their credit card doesn&#146;t work and for a second the movie insinuates that some secret shame resides behind their dippy facade. "That&#146;s the good card," O&#146;Hara insists, and it&#146;s a funny line&#151;in a stroke it suggests the couple&#146;s private vocabulary, and how they fly by the seat of their financial pants&#151;but O&#146;Hara almost instantly repeats it, and the air begins to leak out of the scene. It goes on leaking, until finally the desk clerk (Ed Begley, Jr., who looks primed to play a real character in a real movie) sticks the couple in a utility closet with the mops and cleansers, and that&#146;s it. The couple&#146;s impoverishment is never mentioned again, nor what may have caused it, and we never even get another view of that closet&#151;the sequence is just an exercise in belittlement.

Waiting for Guffman, Guest&#146;s previous film and another snow-globe of a movie, didn&#146;t leave you with contempt for its characters&#151;its innocuousness made its trivial nature bearable. But Best in Show actually thinks there&#146;s something funny in Levy&#146;s squirming as O&#146;Hara&#146;s past lovers praise her sexual prowess in front of him, or in having O&#146;Hara, a supposed dog-show veteran, arrive at the Mayflower in a scooped neck dress that forces her to stick her name-tag directly on her chest. Can there be any surer sign that Guest is on automatic pilot than his turning Catherine O&#146;Hara into an idiotic slut? At least Catherine O&#146;Hara knows what Catherine O&#146;Hara can do. The joke in Guest&#146;s technique is that his characters reveal more about themselves than they realize, and O&#146;Hara absolutely runs with the idea. Particularly in her early scenes she uses a lightning-quick facial semaphore to bring out layers in her character and the material that no one else can keep up with.

Too many of Best in Show&#146;s laughs are strip-mined from Jay Leno monologues (how about all those Starbuck&#146;s coffee shops, ladies and gentlemen?), and the movie&#146;s thinness leaves you starved at the end. Only the cast&#146;s affability and talent saves it from real ugliness. Jane Lynch is economic and precise as the pro handler, and Parker Posey does a couple of hilariously acidic silent burns. Fred Willard and Jim Piddock make a beautiful comedy team as the dog show announcers. Willard&#146;s thoughtless pronouncements (he wants to liven the show up by putting the dogs in comic costumes, and he fills his patter with risque asides) all but exhaust his British colleague&#146;s tact&#151;you can almost hear Piddock biting his tongue. But by the end Posey is confined to an endless, punishingly shrill argument with Hitchcock, and even Willard leaves a bad taste by flogging a baseball metaphor to death. The only ideas that Guest bears down on are the ones that aren&#146;t worth bringing up in the first place.

Christopher Guest may be the Mel Brooks of his time. Both men build their movies around a tenuous comic vision that&#146;s never really filled out, and both shamelessly cannibalize their own situations, characters, and jokes. Here Guest has hung a whole movie on a mere filament of an idea. If his next movie is any slighter than Best in Show, it&#146;ll blow away like dandelion spores.