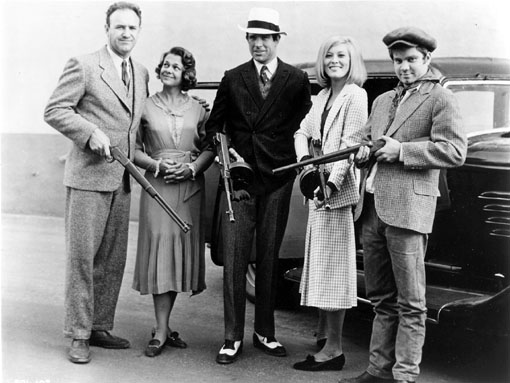 Bonnie and Clyde is a tightly woven story, the deceptively simple screenplay by Robert Benton and David Newman deserving of the awards it won. (One can’t help but to wonder why they failed to equal this effort in subsequent outings.)

The story of Bonnie Parker and Clyde Barrow was headline news in their time, 1930’s depression/dustbowl America. Both came from poor backgrounds in small rural towns. In the film, Bonnie (Faye Dunaway), dissatisfied and bored with her life, yearns for adventure and romance. Clyde (Warren Beatty) already has a prison record when they meet and is, of course, handsome and charming.

They quickly get involved in a runaway life of car and bank theft, guns blazing, blood flowing. It is not plot that keeps the story moving and intriguing; the viewer knows from the start how this pair of utterly amoral psychopaths will end up. Rather, it is in the observations of their characters, their quirky love story, and the context of the cultural background which produced them that interest is sustained.

Clyde walks with a limp as a result of missing toes; he cut them off to avoid a work detail in prison. As romance with Bonnie heats up (the onscreen chemistry between the leads is convincing), it also becomes clear that he is sexually impotent. "Your advertising is just dandy," she says to him, "Folks would never guess you don’t have anything to sell."

But he and Bonnie share a need to make a mark, to transcend their ordinary backgrounds and, in an initially unarticulated way, to find immortality. The notoriety of bank robbers and conscienceless cop killers turns out to be the only route open to them, and the movie makes it clear they weren’t very clever at that game either – the first bank they rob has failed and there is no money in the till.

Their success came from sheer audacity. They follow their careers in the newspapers, fascinated with their own fame. When Bonnie writes her ditty about their history and it is published in the press, Clyde credits her with shaping his fame ("You made me someone they’re gonna remember.") and is able to make love to her for the first time.

Another running theme is their sense that robbing the banks is hitting on the bad guys. The banks, after all, were heartlessly foreclosing on the small farmers. In one bank robbery scene, Clyde pointedly lets a poor farmer keep his money. They become folk heroes in the Robin Hood tradition and their ending is suitably unjust – slaughtered by vengeance seeking cops who never even try to arrest them and bring them to justice according to the law. It may be the 1930s, but this is mythic, frontier America.

The story is told against running backgrounds of dried up fields, dispossessed farming families on the move, the religious roots of midwestern America. It is superbly photographed in saturated colors, making even the poverty and shabbiness somehow beautiful. It is the contradictions between the real and the fantasized, the comedy of errors against the tragedy of wasted and violent lives, the beauty of the screen images against the ugliness of the events that gives the film a constant and poignant sense of irony.

Arthur Penn’s direction brings out fine performances from the leads and the first rate supporting cast as well. His pacing and focus make this a very fast couple of hours.