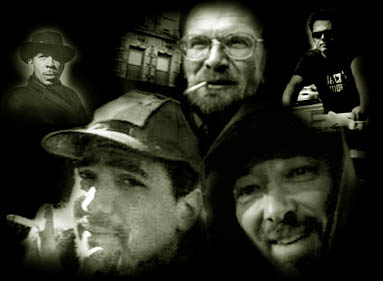 Most documentary films focus on facts more than style – the messages they deliver tend to be more stark and powerful than any directorial tricks that can be applied to them. BookWars is different. More tone poem than polemic, it’s a laid-back and languid look at a group of New York City sidewalk booksellers who preach the First Amendment on a daily basis and practice commerce on its most fundamental plane&#150; street level.

Internet vendors like amazon.com have made book-buying an efficient and antiseptic transaction where one never needs to come in contact with another human being or handle money. The business dealings in BookWars lie at the opposite end of the spectrum &#150; a marketing campaign is a hand-lettered sign and hoarse shouts, distribution is via paper bag or pocket, and payments are strictly cash only.

Writer/director/editor Jason Rosette, himself a sidewalk bookseller for three years, rarely appears on camera. His presence is confined to periodic voiceovers, mostly to introduce his diverse horde of characters. There’s Slick Rick Sherman – master of the anti-sell and slight-of-hand magician on the side; Polish Joe – fueled by nervous energy and chicken Wonton soup; and Pete Whitney – accomplished collage artist and avid toad collector. Rosette shows them acquiring their stock by scavenging through dumpsters, bartering with each other, and book-buying pilgrimages to exotic New Jersey, "Home of The Ten Cent Book." They pontificate on the best ways to present their stock, entice customers to buy, or store books over the winter.

The booksellers’ lifestyle is far less questionable than one might expect. Very few are homeless; most are merely bohemians tired of a regular job’s daily routine and dependence on others. Rosette paints the street sellers as a collective with a common interest and culture. They’re a symbiotic troupe – watching each other’s stands when someone goes on a lunch break or to find a public toilet, comparing notes on what’s selling, and referring customers to each other more often than Edmund Gwenn in Miracle on 34th Street. But it’s a group that nevertheless has its own social strata. The sellers along 4th Street are white and deal in classics and rarities, those over on 6th Avenue are mostly black and sell comics, magazines and porno. And it’s the sellers on 6th that get the most attention from the police.

The style of the film is as eclectic as its subjects. Rosette employs several film schools’ worth of techniques, showing a fondness for grainy film stock, over-saturated colors, and wandering focus and focal points. The net effect is more distracting than illuminating, for at times Rosette seems more interested in utilizing yet another style or shot than he does in fleshing out the characters of his subjects or telling a coherent story.

The closest thing to a plot in the film appears near its conclusion, when Mayor Rudy Giuliani institutes a crackdown on street vendors. Their curb space is reduced and police hassle them for Tax Identification numbers. The booksellers complain, and form a loose-knit group to oppose the Mayor’s policies. Ironically, the lack of organization in the group that was so appealing to the personalities it attracted proves to be a hindrance to its continued existence, and most comply with the Mayor’s orders. The rest either sell their stocks to their compatriots or simply vanish. Rosette himself sells out and heads west to start anew, and the film – like the community it depicts &#150; ends, mostly with a whimper.