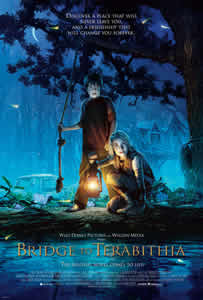 Bridge to Terabithia is a delightful surprise among the rash of banal and tasteless family movies. It explores the small and large issues that children wrestle with as they grow… schoolyard bullies, loneliness, friendship, relationships with parents and siblings, the role of self-expression and imagination, and, the reality of death. Its tender plot, outstanding performances and intelligent and authentic screenplay combine to make it an engaging film that doesn’t preach or condescend to its audience.

Based on the 1977 Newbery Medal-winning book of the same name by Katherine Paterson, Bridge to Terabithia is the story of eleven year old Jess Aarons (Josh Hutcherson), the neglected son of poor and overburdened parents, who finds secret solace in drawing imaginary animals. Though a loner in school, Jess’ one strength had been in winning the schoolyard races…until Leslie Burke (beautifully played by AnnaSophia Robb) moves next door and outruns him easily.

The two slowly develop a friendship fueled by their shared outsider status. Leslie, who is both more sophisticated and more childlike than Jess, opens Jess’ creative powers as she leads him into the imaginary kingdom of Terabithia. Each day after school they go off into the forest and enter their imaginary kingdom filled with fantastic and often scary creatures.

Their friendship, and Jess’ self-confidence, grow and deepen as Leslie shows Jess that their real-life scary creatures, the school yard bullies, can be faced and conquered. And perhaps they weren’t as threatening as they had seemed after all.

Parents, I believe, should know this important plot point in deciding whether this film is appropriate for their children, although it will divulge the ending of the film. In the midst of Jesse’s and Leslie’s happiness, and without preamble, Leslie accidentally dies, leaving Jesse bereft and guilt ridden. His family, teachers and schoolmates provide unexpected love and comfort to him. By the end of the movie, Jesse has begun to accept Leslie’s death and is able to resume his play in the kingdom of Terabithia.

The lead performances given by AnnaSophia Robb and Josh Hutcherson are exceptional and strike just the right combination of professionalism and naiveté often missed by child actors. The supporting cast members, especially Robert Patrick, as Jess’ hard bitten father, and Bailee Madison, as Jess’ adoring kid sister, are wonderfully believable and understated.

The only wrong note in the film was the computer generated wild things created by the visual effects team at Weta Digital (The Lord of the Rings, King Kong). The creatures might have been ingenious and frightening in a different film, but in Bridge to Terabithia, they seem incompatible with the simple realism of the rest of the movie.

This is not a fantasy movie; this is a realistic movie in which children have fantasies.

Both the film and the book versions of Bridge to Terabithia have a rare authentic quality and voice. The author, Katherine Paterson, based her book on a similar incident in her then young son’s life. And now, thirty years later, that son, David Paterson, is a screenwriter and producer of this film. David Paterson has also written a short “official” companion book to the film suitable for 9 to 12 year old readers.

It doesn’t surprise me that it took 17 years to find a studio willing to take the risk of making this family focused film with a hard edge. Several studios wanted to change the ending of the film. One wanted Leslie only to break a leg; another studio thought she should wake up from a coma in the final scene. Thankfully, the producers declared the ending sacrosanct and waited until, surprisingly, Walt Disney Pictures took a chance.

To cut to the chase, Bridge to Terabithia is a beautifully written and acted film with a big heart, but also with the uncompromising reality of death. It is impossible not to be charmed and moved by this film.