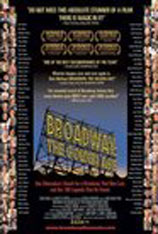 Standing O and way-to-go for that &#147;one, brief shining moment that was known as….&#148; (no, not Camelot) Broadway, The Golden Age, a documentary film bywriter/director/producer Rick McKay.Focusing on the 1930&#146;s through the 1960&#146;s, the film juxtaposes archival footage, stills, and interviews with living theatrical legends (performers, writers, directors and producers) who recall the excitement of a time when Broadway was the sparkplug for incandescent live performances, the nerve center for a vital community of show people, and affordable to aspiring talents. Manhattan rents ranged from $19-$50/month; subways, buses, and ferries cost a nickel; and theatre tickets were little more than a dollar.(If you were really broke, you could "second-act," that is, sneak in for nothing after intermission.)

Broadway, The Golden Age pays homage to over 100 brilliantly talented troopers from a very special time in American theatre. Some of the interviewees are no longer with us and their memories of thrilling live performances&#151;theirs and their inspiring predecessors&#151;will vanish with them.Other performers made a much larger splash in the bigger pond of mass media.Jerry Orbach (El Gallo in The Fantasticks) turned homicide detective in TV&#146;s Law and Order. Carol Burnett (Princess Winifred in Once Upon a Mattress) became Gary Moore&#146;s TV sidekick and host of her own long running television variety show plus several films. Shirley MacLaine, who made a legendary leap from chorus to center stage in Pajama Game went on to at least one of her lives in Hollywood films. And the career of Bea Arthur (The Threepenny Opera, Fiddler on the Roof) matured from the golden age to the Golden Girls. But they all treasure the magic memories of performing in theatre.

This celebration of the genius of live performance leads to some surprises.The actor who turns out to be the inspirational, iconic center for most of the interviewees is Laurette Taylor, who is almost forgotten today. As the film notes, she was so natural that, ironically, she flunked her Hollywood screen test (seen in archival footage). While the screen test may have been unexciting, live onstage Taylor must have been extraordinary. Lyricist Fred Ebb remembers, &#147;I saw (Glass Menagerie) seven times. Seven times! And Laurette Taylor turned around and pulled down her girdle, and I have never been that affected by a stage action in my whole life. It made me weep.&#148;

Magic is evident in the archival footage of a glamorous, breathy Carol Channing in a feathered hat singing her signature song from Hello, Dolly. A young John Raitt sings Billy Bigelow&#146;s soliloquy from Carousel. (Raitt claims that Richard Rodgers found his inspiration for the melody in an aria from Figaro that he was using to warm up his voice.) In another clip, Bob Fosse and Gwen Verdon are seen in rehearsal for Damn Yankees. She reveals how Bob Fosse brought out the humor in Lola, the seductress from Hell, by telling the shapely dancer to play the part as a fat, flirtatious little girl.And in a heart-wrenching excerpt from The Member of the Wedding, Julie Harris, as a tomboyish, troubled teenager cries out her loneliness to deeply compassionate Ethel Waters.

The performers&#146; anecdotes about their struggle days are entertaining and informative.Carol Burnett recalls: &#147;Four of us bought a dress, a dress. Each one of us put in five dollars, so it was a 20-dollar dress at Bloomingdale&#146;s, which was expensive.Then, if you had an audition and you got first claim to it, you got to wear the dress, but then you were responsible for having it cleaned and put back in the closet for the next person.&#148; Gretchen Wyler remembers being hired as the understudy to the understudy in Silk Stockings. Finally, one night in Philadelphia, the understudy, who had seen the star come into the theatre, took a train to New York for an audition. When the star collapsed after the first act, Ms. Wyler stepped into the part, scored in front of luminaries like Cole Porter, and opened the show in New York.

McKay&#146;s film is a fun, fascinating tribute to the glamour and giants of a golden era. It was a time of low-tech electronics and high level acting technique.The interviewees despise the microphones that are ubiquitous in today&#146;s Broadway. When Ben Gazzara, as Brick in Cat on a Hot Tin Roof, whispered, he could be heard in the balcony.

Fortunately for all lovers of the great tradition of live theatre, Rick McKay, an actor-singer with no crew and a tiny budget (at one point he hocked his piano to fund the film) set out on a Don Quixote-like quest to bear witness to this scantily documented period of a great American art form. Getting the interviews must have seemed like tilting at windmills (Angela Lansbury turned him down four times and McKay had to waylay Stephen Sondheim by smacking him on the bottom on his way to the kitchen, apologizing and then, one more time, asking for an interview).Fortunately, for all theatre lovers, students, and professionals, McKay has dreamed his impossible dream, and with one digital camera, reached the unreachable stars.