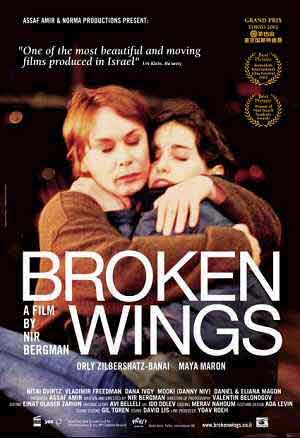 Israeli director Nir Bergman’s first feature film could be happening most anywhere–Bergman seems not to be particularly concerned here with a sense of place. The location is Haifa, but were it not for the strong sounds of the Hebrew dialogue, the story easily could be in Milan or Seville or Pittsburgh. The place that is at the film’s center is the human heart.

Broken Wings tells the story of a family grieving for a recently lost father, coping with emotional survival in the midst of trying economic circumstances. Dafna, the widow (Orli Zilberschatz-Banai), after a period of anguished bereavement, has returned to her work as a hospital midwife. As her 17-year-old daughter Maya (Maya Maron) observes in a classroom discussion, after twenty years of working, her mother doesn’t earn enough to be able to afford a babysitter for her younger kids. That observation is attributed to a failure of the Israeli economic system, but surely it has its parallels among working people everywhere.

Maya, a budding singer and songwriter, is called away from a rehearsal by her mother, who needs her to look after the younger kids while she goes to work. Yair (Nitai Gvistz) is sixteen; he was a star basketball player, but has dropped out of school in a state of barely repressed anger and despair, finding life meaningless since the loss of his father. He works distributing leaflets, wearing a mouse costume that renders him anonymous. He finds succor in the companionship of Iris, a schoolmate who is herself suicidal.

The third of the siblings, 11-year-old Ido (Daniel Magon), is bullied by schoolmates and acts out his own anger and grief by filming himself jumping into an empty swimming pool. The youngest, Bahr (Eliana Magon), is only six, a sweet charmer who has just started kindergarten.

Bergman doesn’t rush his exposition, developing and revealing character and motivation with scenes of the various members of the family as they go about their lives and as they interact with each other. At the same time he sustains a strong narrative center to his film, with an accident providing a pivotal event that snaps them all into the immediacy of family crisis. As emotions run high, conflicts and frustrations are expressed, and each of the principals responds, not always in expected ways.

Zilberschatz-Banai thoroughly inhabits the role of a grieving wife struggling to hold her family together; she projects an exhaustion, both emotional and physical, while, at the same time, retaining an iron core of maternal strength. The hope of romance for her, in the form of a divorced doctor at the hospital where she works, suggests that, just maybe, her constant worries may be lightened by a new companion. The performances by all four of the children ring with a naturalistic, unforced honesty.

The tone of most of the film is bleak, delving as it does into profound loss and the wearying emotional toll of the struggle for survival. But, having graphically established the difficulties, Bergman’s positive conclusion is all the more effective as he celebrates the binding sinew of family connection and the power of a mother’s love.