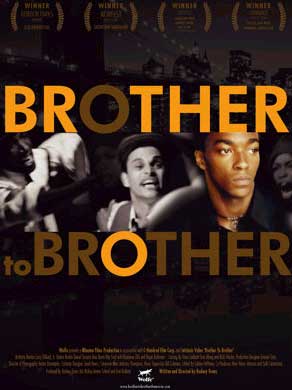 Writer/director Rodney Evansconceived Brother to Brother partly to dramatize his individual experiences as an alienated artist coming of age. Evans, a documentarian, wanted to make a narrative film about topics that never have been dealt with before. His insight is a potent subtext for this story of a young black gay painter at a personal and creative crossroads.

The film won the Special Jury Prize at Sundance, as well as the IFP Gordon Parks Award for Evans&#146; screenplay. The director&#146;s cut of the film is now on DVD as well as being broadcast this week on some PBS stations (observing gay pride month).

Evans tells parallel stories of Perry, a promising young artist and Bruce Nugent, a poet, painter and writer who was a contemporary of master poet Langston Hughes. Elderly and homeless, Nugent now has to live in the shelter where Perry works. The older man recounts stories of 1920s Harlem and his contemporaries including radical thinkers Zora Neale Hurston (Aunjanue Ellis), Wallace Thurman (Ray Ford) and other artists who launched the black magazine, Fire, that was condemned by the NAACP with its scandalous exposes about homosexuals, prostitutes and racial politics, among other taboo issues.

Perry is in art school, struggling to make it on his own after his father brutally kicked him out of the house when he walked in on him having sex with a man. While cruising on the subway, he writes in his notebook "There is a war inside me.&#148; He tries to channel his inner turmoil through his artwork and in the process tries to reconcile his relationships.

He gets him to tell him about the days in Harlem when he and his cohorts were not only challenging the white literary establishment, but refusing to limit their writing to things that would "lift up" the black race. Evans gets past romantic visions and makes realistic portraits of seminal poet Langston Hughes (in a pitch-perfect portrayal by Broadway star Daniel Sanjate) and his circle of radical thinkers.

Although Evans seems determined to get every angle in, the past/present dramatic structure works very well. The unfussy black and white photography (by cinematographer Harlan Bosmajian) and interiors of 1920s Harlem draws the viewer instantly into the characters&#146; lives, as do the subtle soundfields by composer Marc Anthony Thompson. The economy of those short scenes wisely leaves the viewer wanting more.

Evans cast Anthony Mackie (Million Dollar Baby) when he was still a student at Julliard and the actor gives a natural, if measured performance.As the younger Nugent, Duane Boutte (Stonewall) captures the artist&#146;s unashamed artistic hedonism, wanton intellectualism and sexuality.Roger Robinson took the part of Richard Bruce Nugent (for which he won a well-deserved Indie Spirit Award) after there was a yearlong production shut down, during which the original actor dropped out.His Nugent is philosophic, yet lives in the moment. &#147;All these things living inside you until you make peace with them,&#148;he quietly tells Perry. Robinson’s portrait is joyously dignified, poetic and earthy.