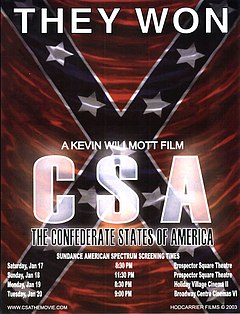 Kevin Willmott has created a, slick, seductive, and sophisticated film with Confederate States of America. In the genre of mock documentaries such as This Is Spinal Tap, Willmott frames CSA as if it were a slice of educational television programming, say a Ken Burns production (like The Civil War), but with commercial breaks. The production values, the camera work (panning across historical documents) and the sober point-of-view voice-over lend a deadpan seriousness which can be mesmerizing. The mock commercial breaks serve to break the illusion of verisimilitude, peddling products to a slave-owning American society. (Many of the products, brands and jingles are historical resurrections of actual artifacts.) What truly gets under the viewer&#146;s skin in CSA is how difficult separating fact from fiction becomes under Willmott&#146;s brilliant craftsmanship.

In an alternative history of America, the South won the War between the States through the aid of France and Britain, both nations going with the best perceived capitalist bottom line. Slavery, in the hands of the vanquishing Confederate States, becomes a principle of property rights (and coincidentally plays out as a scathing send-up of the Bush-era "ownership society"). As a result, most abolitionists (code for "liberals" or "Democrats") have fled north and actual liberal-to-progressive, or even everyday Democratic U.S. history becomes displaced as a history of Canada. Willmott splices fictional characters and fake history into historical film footage as was done in Forrest Gump. While an intended consequence may be to make all this fake history seem plausible, at the same time it creates a subtext flush with an undercurrent of anxiety. How easy it is in our digitally malleable society of electronic surveillance, this film demonstrates, for base propaganda to become the fine high art of PR spin, for all truths to become merely "opinions."

The fictional British Broadcasting Service&#146;s documentary charts an alternative history from the rise of the CSA and the Reconstruction of America as a slave-owning society, through the CS war to transform South America into a "Tropical Empire" and subjugate non-whites on a model echoing the global empire of the British. In CSA-reconstructed America, slavery was brought back to the North when President Jefferson Davis offered a tax rebate incentive to businesses and households to buy them back. (At one point, in a visual aside, a pictogram is used to set "one slave equals one car," albeit a 1950s tail-finned vision of a luxury car.)

With every fictionalized turn, Willmott exposes the racist thinking and racist institutions still operating just below the surface in American society today. In the twentieth century, the CSA has chosen official neutrality in Europe&#146;s war with Hitler, while maintaining a social and political closeness with the Nazi regime, its values and practices. And CS expansionist dreams, the same old Manifest Destiny of actual history, causes America to launch a pre-emptive strike on Japan in 1941, both mimicking Japan&#146;s attack on Pearl Harbor, and echoing the present-day White House policy justifying preemptive war on Iraq. When John F. Kennedy is assassinated in this alternate history, is it because it appeared he would emancipate women and might even give them the vote. In TV news clips Phyllis Shlafly types are shown voicing their outrage at such potential treason. (The only good Northerner, it seems, is a dead one.)

Willmott clearly has conducted careful research to set up his tightly observed parody in CSA. His film-making here demonstrates the very fine line between documentary and propaganda. The parody commercials are indispensable to break the tension and remind the viewer that the film is a "just" a joke, much in the vein of Spike Lee&#146;s Bamboozled. Both films pursue a satirical strategy similar to that taken by Mel Brooks with The Producers, engaging the dangerous, hair-raising strategy of the courtly jester of an earlier era in the European tradition. CSA is an exquisitely terrifying film in a funny, deadpan way. It is satire of the most sublime sort.