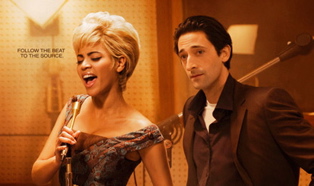 Cadillac Records surprised me. I expected the music to be great, and it was. But I didn’t expect the characters to be so well-developed and the actors to give such masterful performances.

Starting in 1950, Len Chess (and his brother Phil) brought these talented performers, and many others, out of the constrictions of segregated “race music” to a wide integrated young audience who just loved blues and rock & roll and couldn’t have cared less about the skin color of its performers.

But it wasn’t until 1961 that Etta James’ hit “At last", with its pleasing back-up violins went to #2 on the Billboard R&B chart and crossed over the “color line” to reach #47 on what had been the all white Billboard Pop Chart. In its own quiet way, the crossover of Etta James’ beautiful song was a milestone in the Civil Rights Movement.

As was common in his rough and tumble world, Chess was happy to give payola to the DJs and was a bit vague about his stars’ royalties. He gave his artists shiny new Cadillacs whenever they had a new hit; they were not aware that the cars came out of their royalties. Then again, most of the musicians didn’t even have bank accounts.

Jeffrey Wright (W., 2008, Quantum of Solace, 2008) was outstanding as Muddy Waters and he sang Waters’ songs with raw authenticity.

Muddy Waters, an illiterate Mississippi sharecropper, was discovered in 1941 when Alan Lomax, the innovative folklorist, recorded him for Lomax’s Library of Congress collection. http://www.loc.gov/folklife/lomax/lomax.html

Muddy was an innovator of the electric guitar and a giant of the blues for almost 40 years. The scores of musicians he influenced include The Rolling Stones, Jimi Hendrix, Eric Clapton, Canned Heat, Bob Dylan, Led Zeppelin, The Allman Brothers Band, Humble Pie, Paul Rodgers, Brian May and Jeff Beck.

Beyoncé Knowles’ (Dream Girls, 2006) portrayal of Etta James was first rate. Her acting was nuanced and her singing captured the essence of Etta James. Not an easy thing to do.

Eamonn Walker’s commanding depiction of Howlin’ Wolf shows the broad range that this Shakespearian actor possesses. Wolf, a superb electric blues guitarist with a self-assured, menacing presence, was disdainful of Muddy Waters’ reliance on Len Chess. No advances on royalties for Wolf. He only wanted what he had earned.

Little Walter, a very young and very talented blues harmonica player, was well acted by Columbus Short (Quarantine, 2007, Stomp the Yard, 2006). Little Walter was violent and made somewhat crazy by drinks and drugs. It must have been difficult for Short to bring out Little Walter’s belligerent affect as well as his occasional softer inner personae, but he succeeded.

We didn’t see enough of Chuck Berry in Cadillac Records. He was, and still is, the most commercially successful of the Chess Records stars. He was savvy enough to write big hits for the white teenage market (School Days, Sweet Little Sixteen), but he is notoriously difficult in his business affairs. He refused to allow his songs to be used in Cadillac Records. The few Berry hits in the film are owned by Marshall Chess, Len’s son.

Hip-hop’s Dante ‘Mos Def’ Smith (Sixteen Blocks, 2006) performed Berry’s hits surprisingly well and had the duck walk down, but his part was quite small, as Berry was serving time for taking underage girls across state lines for most of the film.

The Chess artists had come up from the rural south to make it big in Chicago, and they were unaccustomed to life in the urban North. They carried guns and knives, and used them; they went to jail on real and trumped up charges, used drugs and alcohol to excess, gambled and had numerous affairs. But they created memorable music that still moves us.

As an old time rock & roller who first listened to Chess Records’ artists on a tinny AM radio many years ago, it is a surprise and pleasure to see these remarkable performers being celebrated. Cadillac Records has impressive performances by multi-talented actors, heart, soul, and of course, music that just won’t stop.

Some of Chess Records’ recording stars were: