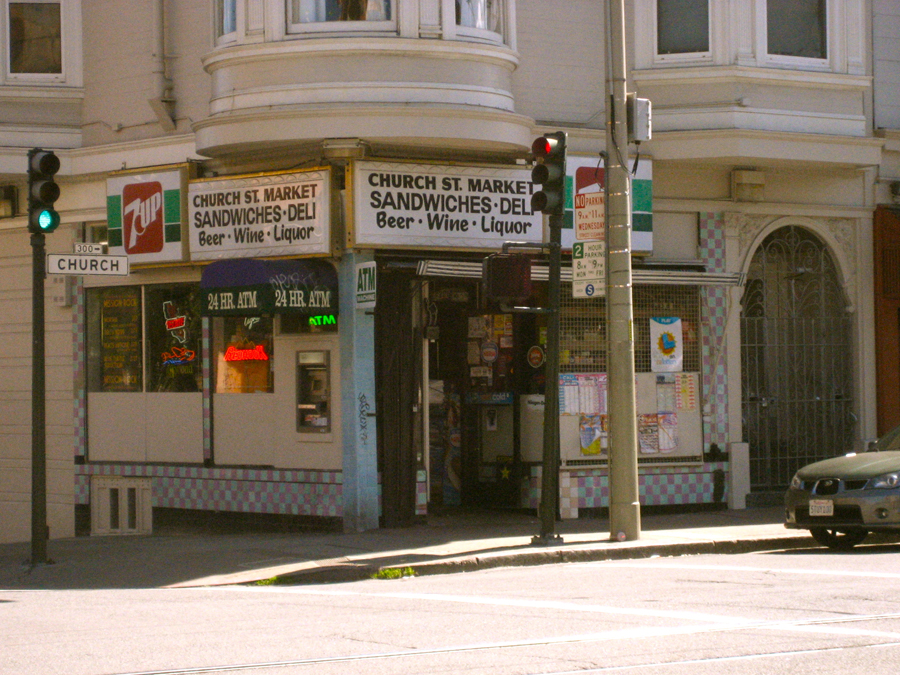 Our Buddhist friends like to remind us that the idea that we are
separate is an illusion, not a fact. And what better form to incarnate
this insight than the documentary which separates fact from fiction?
San Francisco documentarian Katherine Bruens was looking for a story
about a local corner store when she met Youssef El Haj, whose Church Street Market is
here, and his story couldn’t be more surprising and rich. Youssef’s
liquor cum grocery dry goods store is at 15th and Church, where he
works  24/7, and, at film’s beginning, lives in the  back, his wife and kids 7389 miles away in Bethlehem,
Palestine.

The Palestinian struggle, which few Americans know
about, reveals itself through him. That struggle began in 1948 when the
Zionists arrived in Palestine to make their dream of a one ethnicity
one religion state the only fact on the ground, at the expense of the
indigenous inhabitants who’d lived there for hundreds of years, and 750, 000 – roughly the
population of San Francisco now — fled n the ’48 War.

Youssef’s story puts a moving and very human face on the Palestinian people’s sense of
dislocation in the occupied since the 1967 War West Bank — 250,000
fled in that conflict — and here, and the glue that holds everything
together is love, for the realities of the heart are never easily
denied.

Bruens and her expert cinematographer Sean Gillane — a bare bones crew
of 2 –capture their charming and unlikely hero’s loneliness and pride in his
store which has a deservedly loyal following — I met him there
last December when walking to a Christmas party in the next door
Castro and can easily see why.  We see him celebrating Christmas —
he’s Christian —  with his brother and his family — and calling home, longing all the while
to be reunited with his wife and kids, and bring them here.

Finally, 10 years later, through the help of his local lawyer, he’s allowed to
go home to Palestine for a visit. Though the film’s engaging
throughout, with these sequences Bruens strikes gold, probably because
we’re always curious about how other places look, and more importantly
how the people living there feel.

She, without a trace of sentimentality, shows that Youssef
and his family and their friends in Bethlehem are just like us —
longing for connection and finding joy even when living in the most
humiliating circumstances.. The occupying Israelis turn the water off
at whim — Youssef’s wife has just cooked a big family dinner and the
dishes are ready to be washed — checkpoints clutter the West Bank (residents
were beside themselves when the San Francisco Bay Bridge was
closed last winter, but imagine this happening every day of your life),
and there’s the grotesque 3o foot high concrete apartheid wall complete with
right-out-of-Kafka guard towers encircling
Bethlehem, and much of the West Bank, decorated with grafitti like ”
might is not right “.  Plus the Jews only — with Jews only access
roads — settlement of Gilo which looks like a bad scifi movie set that
obviously doesn’t belong there.

Bruen’s wonderful film never traffics in the stage managed ” reality ”
of reality shows, but merely shows what is, and the inclusion of music
by the enormously popular Syrian singer George Wassouf, with its
intoxicating colors and delirious rhythms, helps give it even more
atmosphere and kick. Corner Store opens a much needed window on the
subject of Israel / Palestine, which so often feels like a sealed house
where both sides play the blame game. And it shows that the other can
never really ever be the other because it’s — us.