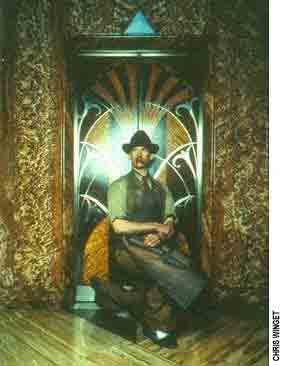 Cremaster 3 is the wordless, extravagant, three hour long culmination of Matthew Barney’s Cremaster Cycle. The five film series runs ten hours and is the centerpiece of a retrospective installation at New York’s Guggenheim Museum. His work has been nearly impossible to see thus far, but Barney’s increasing reputation as a sculptor/filmmaker/performance artist/art world cause celebre has led to week-long engagements for the entire cycle in a few major cities and limited theatrical distribution for this final segment.

Cremaster 3 is experimental filmmaking on a colossal scale. The turgid, ritualistic pace, uncanny imagery and carefully elaborated private cosmology look back to Kenneth Anger’s Lucifer Rising, though Barney has advantages conferred by his art world stardom. Not since Dennis Hopper’s 1971 vanity epic The Last Movie has a film this staunchly avant garde had such a large budget and potential access to a mainstream audience. Beginning and ending on the Isle of Man and climaxing in the Guggenheim, the film is set mainly in the Chrysler building’s opulent art deco fantasia of burnished mahogany and dappled golden light. Peter Strietman’s swooping digital cinematography and Matt Ryle’s opulent production design give the film the look and texture of a sumptuous, no-expense-spared studio period piece. In a work this perversely inscrutable, the voluptuous formal style has the advantage of making the fetishistic spectacle at its core play as a blockbuster, like David Lean directing Eraserhead.

Barney’s descriptions of his work tend towards the clinical, with a penchant for biological metaphor – the cremaster, for instance, is the muscle that determines the height of the testes, and it serves as the structuring principle for the first films in the series. This work is diminished by explication, however. It’s best at its most irreducibly mysterious–there are characters to whom things happen, but these events defy understanding. The film is better understood as the enactment of quasi-Masonic rituals of birth, death and creation in lucidly hallucinatory imagery that grounds the strangest moments in physical action.

The sheer jaw-dropping spectacle and weirdly intuitive leaps of the narrative’s dream logic make the film compulsively watchable. In the first hour alone, it drifts inexorably from primordial giants stalking a barren island to a craftsman slowly filling an elevator with concrete while an undead corpse is dragged by schoolboys from its basement crypt to the Chrysler lobby as a prelude to an elaborate smash up derby. It’s anything but boring.

The film is also very funny. In the opening sequence, each step the giants take shakes the island and the camera, and their hide and seek battle is accompanied by a soundtrack of dueling nonsense syllables over a lilting Celtic air. (It’s like two eight year old boys goofing over a Chieftains record.) Barney’s performance as "The Entered Apprentice" is indebted to Buster Keaton. He is stolid, emotionless in the face of Sisyphean struggles (it takes him even longer to get a drink than it does to fill that elevator), barely looking up as a bartender wreaks havoc in the pursuit of a clean glass. And his blankness gets funnier as the film progresses. When he reappears at the climax in hot pink tartan cape and blue plaid knee socks, struggling to climb the spiraling interiors of the Guggenheim, the sartorial mismatch with his implacably determined countenance vies for laughs with the absurd Busby Berkeley pastiche of bathing beauties, hardcore punk bands, highstepping Rockettes in cute lamb outfits and sculptor Richard Serra flinging molten vaseline at the wall.

This is not easy viewing by any means. The first half of the film climaxes with a scene of oral surgery that could give David Lynch nightmares, all set to a keening, sputtering theremin soundtrack. Desiccated corpses, bloodied mouths and oozing orifices are presented with a matter of fact precision, less for gory thrills than quiet speculation. Since it develops its ideas and connections incrementally, measuring out the material in tiny dollops that snowball towards the climaxes, there are inevitable stretches of tedium. Yet when Cremaster 3 ends, it’s clear that something significant has happened, however difficult it might be to ascertain just what that might be. It’s awesome work: ineffable, elusive, yet inexplicably powerful.