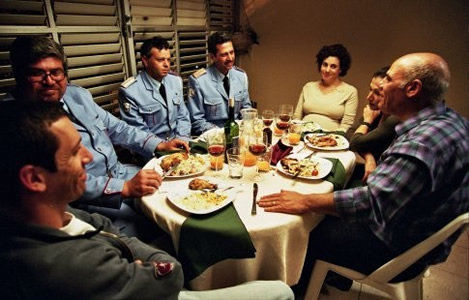 I’m guessing that it was the architect Ludwig Mies Van Der Rohe who did most to create the concept that less can be more. His buildings were free and open spaces enclosed within a sparse, minimal structure. If he had decided to make films instead of designing buildings, and if he was really good at it, he might have created something as lovely as The Band’s Visit.

The first feature film of writer/director Eran Kolirin tells the story of an eight man, Egyptian police band visiting Israel to play at the opening of an Arab Cultural Center. They immediately become lost, end up in the middle of nowhere, and spend the afternoon and night dependent on the small town hospitality of skeptical Israelis. There’s a plot, sort of, kind of. But nothing of dramatic import ever happens. Egyptians and Israelis meet in large and small groups, talk about life and love, music and culture, families and fears- everything but religion and politics. In this minimalist film, there are no huge transformations, nobody lives happily or unhappily ever after, no epiphanies are proffered.

It’s easy to mistake this trifle of a story for a trifle of a film. Its political values seem no more complex than Rodney King’s plaintive, "why can’t we all just get along?" But not for nothing was it nominated for thirteen Israeli Academy Awards, winning eight, including best screenplay, actor, actress, director, and picture. Its rich form and content reinforce each other perfectly, and, in this case, so much less proves to be so much more.

The look of The Band’s Visit is as flat and undramatic as possible. Eschewing fancy camera work., the most memorable visuals are long, establishing shots in which people enter or exit the frame. The Egyptian uniforms are a vivid blue that contrasts with every other color that seems flattened by the heat and the bleak landscape. The town looks as if it hasn’t been completed, or it was completed long ago and everyone just got bored and left. And why wouldn’t they? The lethargy of the place is barely flummoxed even by the arrival of the Egyptians. The dialogue and acting are as understated as the physical and technical dimensions of the film. But each performance draws us to it, and earns our patience as we slowly see the idiosyncrasies and integrity that characterize a life.

Eran Kolirin has channeled Buster Keaton to make this driest of comedies. The most cataclysmic place on earth (the Middle East) and the most intractable of problems (Jews and Muslims) are condensed to a dozen characters feeling out the strangeness of the "other." The laconic meets the mundane. An Egyptian lothario tutors a hapless Israeli in how to connect with a woman. Jewish and Muslim lovers of music discuss American musicals and jazz. And at the core of the film, the repressed leader of the band opens tiny cracks into his humanity to a ballsy, self-confident Israeli woman whose bravado barely conceals her own vulnerable humanity. Though the time frame is condensed to about 24 hours, the pace is leisurely. People connect haphazardly, it’s often awkward and fails, they try to reconnect, sometimes failing yet again.

As you might guess, this is a movie that’s comfortable with all types of silences: awkward pauses within halting dialogues, sexual tensions, the discomfort of opening up a bit then wanting to hide a bit. And if the language of silences can be awkward, so is the spoken language. Some communicate in Hebrew, some in Arabic, many in English. America’s language and culture often serves as the common currency for these strange bedfellows. And then there’s the awkward body language. The Band’s Visit is a delightful little meditation on the myriad ways we have of fumbling communications.

And just as Buster Keaton can make us laugh, but there’s a painful poignance in his inability to fit into the world, this film makes us laugh and ache for easier ways to get along. And so, is there reason to have much hope? Yes. Because, in the end, people are people. And most of us do have a shared humanity, a shared desire to get along with our neighbors. And while The Band’s Visit teases human frailties, it has an abiding affection for us. And it’s nice to be loved. And it’s nice to be reminded that most "others" aren’t so other. And it’s nice to do all of it with grace and artistry. Very little really can be so very much.

NOTE: The Band’s Visit was Israel’s original submission for an Academy Award as best foreign film. But the Academy rejected it because so much of the film was in English- of the forty minutes of dialogue, twenty-two are in English, eighteen are in Hebrew or Arabic. Though the writer, director, cast, crew, and financing were all Israeli, the Academy rules require that over fifty percent of the film be in the indigenous language. The only consolation for this absurdity is that it was replaced by another strong film- Beaufort, which I liked and admired. But my heart is with The Band’s Visit.