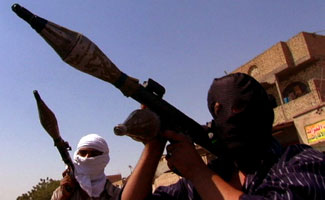 The Blood Of My Brother (2005)
www.storytellerinc.com

It seems only yesterday that I told two of my Palestinian friends, Ramiz and Joe, that our making war on Iraq again would open Pandora’s box, and unleash untold horrors. That was over three years ago, and the horrors unleashed have given horror new meanings. Iraq now — just weeks before the midterm elections — is an unblinking litany of death, destruction, and struggle. It’s easy to be ‘over’ what’s going on there, like getting calls from a friend who always has the same bad news. Andrew Berends’ harrowing new cinema verite ‘documentary’ feature, ‘The Blood Of My Brother,’ was made in Baghdad in what now looks like the nascent days of the Iraqi ‘insurgency’ — a six month period beginning in April 2004 when he got there looking for a story behind the news stories — and one with no end in sight. It’s Pandora’s box alright, but even more like Sisyphus pushing his huge rock forward as it keeps relentlessly falling back on him. Berends’ film is no prissy pc attack on ‘neo-con’ hubris, but a startling in-your-face look at the human cost of just surviving in ‘post Sadaam ‘ Iraq. No fake blood, no tanks pumped up by music, no slick ‘war’ footage which looks like it was done on a very closed set. There’s blood — lots of it — but what sticks in your mind and heart are the faces he shoots, wonderful expressive faces, and that’s where he finds his story . This is easily one of the most intense films I’ve ever seen — Berends never lets us off the hook — and yet it’s hypnotic as Michael Mann’s big screen ‘Miami Vice’. You want to look away, but can’t.

Berends’ principal characters have no place to hide. The family he follows lives in Baghdad’s sprawling and very poor Sadr City. Ibrahim’s older photographer brother, Ra’ad, is killed by American troops while guarding one of Iraq’s most sacred shrines 16th century Al – Kadhimiya mosque — on the eve of opening his own shop. Ra’ad’s friends pick his dead body up from the street — he’s lying next to the curb — put it in a car, and the picture’s off and running, with spectacular footage shot by Ra’ad’s friends of his body being carried by a chanting crowd of 7000 to the mosque. ‘May Allah relieve us of this sadness and this ugly occupation ‘ shouts Shia cleric Moqtada Al-Sadr’s assistant. Ra’ad has become a martyr for the cause, and Ibrahim is thrust into a part he never dreamed he’d have to take — running his brother’s business, and caring for his mother, and two sisters. Ibrahim, sobbing, pulls his brother Ali, to him, his mother can’t bear it, nor can his sister Bayda. Berends’ camera watches — no cuts, no zooms — it’s just raw human emotion. It’s painful because it’s true — no MTV Real World airhead commentary — and these people are in extremis and not just pooh-poohing their roommates’bad habits or how they want to get laid, and why can’t they — ‘ and American people sleep comfortably ‘ as Ibrahim says much later on.

Berends also goes with American occupation soldiers on a raid on a sleeping Iraqi family in dead of night; they lead the men of the house, blindfolded, into the blackness, with no lawyer, forget military tribunals, in sight. Even more startling is a pitched in the alleys’ face-off between Sadr’s Mehdi Army guerillas and a helicopter, with the boom-thud-boom of a tank,coming and going from nowhere,like a lumbering insect. And, forty days after Ra’ad’s death, Berends goes with the black ‘abaya’ clad women on their visit to his martyr’s grave — white and dusty beige, with lime green — an Islamic symbol for paradise — around the cemetery door. Their laments rend the air, pierce the heart. And, if that weren’t enough, Berends goes to see a family torn apart by death — a beautiful little girl crying uncontrollably– her mother died next to her — as a woman, probably, her grandma, cradling an infant asks , ‘ What have these children done? Why do they deserve this ? ‘

These are metaphysical questions, and being metaphysical ones, they have no firm, unambiguous answers. Berends’ film is a courageous act of witnessing, and whether consciously or not, it ends up asking these. His director’s commentary on the DVD mentions ‘ the unconscious ‘ at one point, and that’s I suppose what you’d expect an elaborately educated Westerner to say — it’s all a great, dark unknowable thing. Berends told me on the phone that ‘it’s a struggle to get people willing to watch films like these.’ One hopes that the stunning looking and sounding — the score is by moving-up-in-the-ranks Brit composer Stephen Barton, with santur ( hammered dulcimer ) and vocal contributions by the young Iraqi- American Amir Al Saffar — DVD, with extras, will be seen more widely than the film was in its limited theatrical showings. Americans have never been too keen on reality — we wouldn’t be in the domestic-international mess we’re in if they were — and they’re generally sheep following passive. Berends seems wonderfully atypical of his generation — he was born in Manhattan in 1975 — which makes me feel guardedly hopeful for him and the future. ‘The Blood Of My Brother’ strikes me as the fruit of a deeply personal voyage to know. And perhaps it’s a baby step in a fiercely dark time. The Qur’an 22: 46 puts it this way — ‘It is not people’s eyes that are blind, but their hearts within their breasts. ‘

(11049)
$7.64 (as of January 23, 2021 - More infoProduct prices and availability are accurate as of the date/time indicated and are subject to change. Any price and availability information displayed on [relevant Amazon Site(s), as applicable] at the time of purchase will apply to the purchase of this product.)

(7832)
$6.99 (as of January 23, 2021 - More infoProduct prices and availability are accurate as of the date/time indicated and are subject to change. Any price and availability information displayed on [relevant Amazon Site(s), as applicable] at the time of purchase will apply to the purchase of this product.)

(19375)
$20.99 (as of January 23, 2021 - More infoProduct prices and availability are accurate as of the date/time indicated and are subject to change. Any price and availability information displayed on [relevant Amazon Site(s), as applicable] at the time of purchase will apply to the purchase of this product.)
related posts