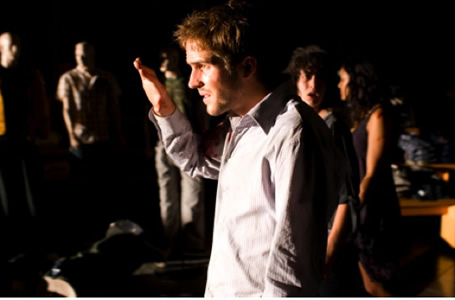 Cloverfield, directorMatt Reeves’ movie about apocalypse descending upon Manhattan one warm evening in May, is a terrifying and gripping film shot through the narrow view of an amateur videographer. The conceit of the story is almost identical to that of The Blair Witch Project. A title card labeled “Department of Defense” at the beginning informs us that we are watching footage from “Multiple sightings of case designate ‘Cloverfield’ camera” found in an “area formerly known as ‘Central Park.’”

It’s an ominous hint that’s easily forgotten in the first segment of the film, which concentrates on the affairs of a group of young, affluent Manhattanites. Twenty-something Rob is about to leave for a new job in Japan and his brother, Jason, throws a surprise party for him. Rob’s beefy best friend, Hud, is dragooned into filming the party as part of Rob’s going-away present. For the first fifteen minutes Cloverfield seems to be a comedy of manners in which Hud’s reluctance changes to fascination as the evening progresses. He begins to doggedly record, with a comic absence of tact, the sexual soap opera inevitable at such gatherings. Suddenly, in the midst of all this gossip, loud music and whispered confidences, there’s the sound of distant explosions. The building shakes and the lights go out.

Initially the reaction of the partygoers is that of excited spectators. Power is restored a few minutes later and they gather around the TV to hear an anchorwoman speculating about an earthquake and a capsized tanker. After deciding they could get a better view of whatever is happening upstairs, they all troop up to the roof — where everyone quickly discovers that they are not merely an audience with a good view of something happening somewhere else to someone else. The frightened rush back down the stairs and into the street marks the point where normalcy ends and nightmare begins. From then on, Cloverfield is about surviving, or not surviving, unthinkable disaster. The group of friends is whittled down to Rob, Jason, Jason’s fiancée Lily, Hud, and Hud’s crush, Marlena, a party girl who is not really a member of their clique but just happened to have dropped in that night.

Anyone who has watched the trailer already knows that this is a science fiction/horror film filtered through the experience of 9/11. Though almost all of it takes place at night instead of midmorning, there are some unsettlingly familiar images, as when a building explodes in the distance or when a massive cloud billows down the street, engulfing fleeing crowds and bleaching their skin and clothes with dust. In addition, there are so many echoes of popular fiction in Cloverfield that it’s tempting to describe it as if it were a recipe – a good dollop of Godzilla, some King Kong, The Blair Witch Project, Special Bulletin, and even Brian Aldiss’ short story, “Poor Little Warrior” come to mind.

The monster, at first offered in only tantalizing glimpses, is no mere jumped up lizard or gorilla. When we finally see it, it’s an alien abomination raining rubble and vermin down on city streets. Horrors are battled in a subway tunnel and filmed with a jerky, up-close immediacy that makes for one of the most terrifying scenes in the movie. There are some ghastly consequences to this encounter, a girl to rescue from a tower, and at least one moment straight out of a 1950s monster film where American troops run through Manhattan firing hopelessly at the roaring behemoth.

The whole, however, is an original, with touches of realism that set it apart from movies like The Day After Tomorrow or Independence Day. These are not the usual handful of characters that infest such movies. Nobody is a presidential aide or a brash fighter pilot or even apparently related to a presidential aide or brash fighter pilot. When Mom calls on the cell to find out whether or not Rob and Jason are safe, it’s not from her office in the White House or some scientific think-tank where she’s feverishly working on how to defeat the monster. It’s the same phone-call any frantic mother would make to her sons after seeing mayhem in their neighborhood on CNN. Famous New York landmarks are destroyed, but since most of it is shown through Hud’s inexpertly wielded camera, we don’t get the distance imposed by several beautifully framed overhead and street level views of it happening. (We do get a wonderful and funny shot of the Statue of Liberty’s head sailing into view and banking off of several buildings like an enormous, expertly lobbed golf-ball.)

Best of all, because the characters are well drawn, well acted, and not played by easily recognizable celebrities, their efforts to live through the night are poignant rather than merely interesting. As Rob, Michael Stahl-David is both likeable and believably callow, a nice young man who is trying, at the worst possible time, to make right a past mistake. Lizzy Caplan is especially memorable as the obviously unhappy Marlena, and Jessica Lucas is good as the just as obviously well grounded Lily. T.J. Miller as Hud deserves credit for managing to convey Hud’s personality almost entirely off-screen, in the form of frightened, often funny commentary. He’s not merely the vehicle for a cinematic device. He’s someone who, possibly too late, has discovered something that engages and interests him. Filming what is “going down” increasingly becomes an obsession to him.

Which brings us to a caution that definitely needs to be included in any review of this movie. Since much of it is filmed in shaky-cam, viewers prone to motion sickness might find themselves getting queasy, especially during the early party scenes. Even so, this is a movie well worth seeing, on a large or a small screen. It’s a monster film with a brain, one you can watch and admit to enjoying without hating yourself afterwards.