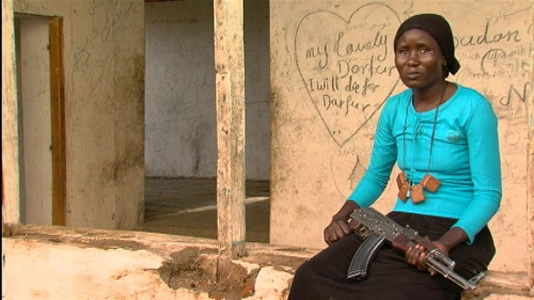 This is how ignorant I am: until I saw this documentary I didn’t know Darfur was a region in Sudan. And it’s not that I didn’t care. It’s just that there are too many things to care about, in too many places in the world, and none of them are easy to understand, you know what I mean?

In other words, I’m the average American.

Which means, I’m the perfect audience for this movie.

Darfur Now serves as a primer on the genocide in Sudan, where the government, claiming to be in the midst of a civil war, has enlisted a militia group—the Janjaweed, or “Devils on Horseback”—to drive several ethnic tribes from their homelands in Darfur. And while the film glances over the Sudanese government’s motives, the impact of the genocide can be grasped in two stark facts: at least 200,000 civilians have been killed, and another 1.5 million have been displaced into camps where the supply of basic necessities depends almost solely on international aid.

The film follows six individuals working in various scales around the globe to end, resist, or abate the genocide and its effects, and their work is astounding enough that they deserve to be named in this review: Hejewa Adam, a young mother who took up arms against the Janjaweed after the murder of her 3 month-old son; Ahmed Abakar, the stoic leader of his fellow refugees in the camp of Hamadea; Pablo Recalde, an international relief worker in a daily race to stave off death and rioting among the displaced refugees; two Americans, a young activist named Adam Sterling and Hotel Rwanda star Don Cheadle, who successfully lobbied the state of California to divest its monies from Sudan; and a United Nations prosecutor, Dr. Luis Moreno-Ocampo, who prosecuted leaders of the military juntas in Argentina in the 1980s, now working to bring key Sudanese officials to justice in the international court.

The dots are connected when Hejewa Adams, trying to boost the morale of her fellow guerillas, tells them, “There is a man named Ocampo. Ocampo will save us. Ocampo will save us,” while half the world away, Ocampo’s haunted eyes tell us that yes, he has accepted the job, and yes, he is afraid he won’t succeed. While Ocampo’s investigations led him to charge two Sudanese officials with war crimes, to date Sudan has yet to turn over the suspects for trial at the Hague.

Darfur Now has drawn criticism for its artless construction, and while it’s true, director Theodore Braun is no Michael Moore, he knows to step aside and let the passion of his subjects shine through.

I’m not saying that this film turned me into a Darfur activist. But I pay a little more attention now when I hear Darfur mentioned in the press. And I still think about Hejewa Adams, fierce in her grief, training for battle against the Janjaweed. I hope to God she’ll never engage with the Janjaweed. Because after watching this film, I can never say again that I don’t know anyone affected by the events in Darfur.