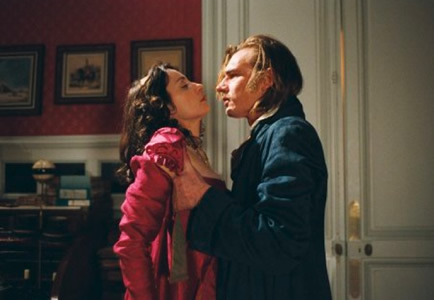 Critics often get blasted for seeming to prefer older movies to newer ones. Part of this is a matter of perception: critics, like most people, prefer to remember the good over the bad. So you’re not going to find many articles dwelling on the worst movies of the 1930s, but you’ll find quite a few discussing the best. Critics, however, are indeed a nostalgic lot, and I do go into the movies of my favorite auteurs hoping to relive the glory days. My expectations are of course unrealistic, and inevitably, I am disappointed. However much you may like The Departed or Match Point, they aren’t Taxi Driver or Manhattan. And Jacques Rivette’s The Duchess of Langeais is not and cannot be Celine and Julie Go Boating or Le Pont du Nord.

There are exceptions, but filmmakers who have been at their craft for decades are simply going to lose some of their fire. Rivette is 79 years old, so I guess I should be happy he’s even making movies. Capturing the zeitgeist is left for the youths. Still, The Duchess of Langeais does open promisingly.

Set in 1823, Armand de Montriveau (Guillaume Depardieu), a former soldier of great fame, comes to the Barefoot Carmelites Convent ostensibly to listen to the cloistered nuns’ music. It turns out he is actually seeking out Sister Theresa, formerly the titular Antoinette de Langeais (Jeanne Balibar). Antoinette, in order to talk to Montriveau, tells the Mother Superior that he is her brother. Reigniting old passions, he tries to talk her into leaving with him. Distraught, she responds, “Mother, I have lied to you! This man is my lover!” Quite the dramatic hook.

Cut to 5 years previous. Montriveau has just returned from being held captive for 2 years by “Savages” in Africa and now walks with a limp. He is hailed as a “hero of the Empire.” Introduced into polite society, he encounters the married Antoinette, who instantly decides to make him her plaything. Each time they meet, she flirtatiously elicits a bit of his personal travails from him, teases him, then connives a way to get him to leave. To pursue her, Montriveau must enter her world of social etiquette in which she is the master and he is ill at ease, leaving him an easy victim to her manipulation and whims. Unable to consummate his love for her, he grows increasingly frustrated.

What eventually happens is fairly predictable given the film’s opening, but even worse is getting there. The middle section of this 137-minute movie feels like it’s set on an endless loop of Montriveau’s passionate proclamations to Antoinette followed by her cursory rebuffs. Even worse, the staid camera work films almost the whole thing in boring medium shots. Rivette tells the story at a length any other filmmaker would have halved. While this might be said for any number of his films, even some masterpieces, The Duchess of Langeais, unlike those others, really makes you feel it. It’s like having a giant sloth taking its time to climb onto your back. The only bit of liveliness we get in the movie is when Balibar gets a mischievous glint in her eye and makes purposefully ludicrous melodramatic gestures.