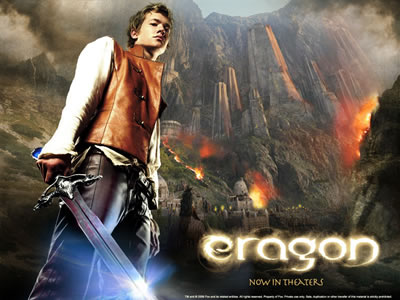 Since it was written for a young adult audience, I may be one of the oldest readers of Christopher Paolini’s fantasy adventure, Eragon, the first of two books published to date in his Inheritance Trilogy. So perhaps I am one of the oldest fans who was anticipating with pleasure Eragon, the film. Having seen it, I can report that the film should not be a major disappointment to the book’s young fans, although they may find it imperfect.

Christopher Paolini’s journey is nearly as fantastic as Eragon’s. Paolini wrote Eragon when he was fifteen years old; it was then edited and self-published by his parents. For promotion, he gave talks at libraries and schools around the country. Eragon found its way to Carl Hiaasen (author of Skinny Dip, Strip Tease, and Nature Girl, et al) when Hiaasen’s step-son bought a copy after one of the readings. The book was published by Knopf, Hiaasen’s publisher, soon thereafter. Christopher Paolini was a New York Times best-selling author at the age of 19.

Eragon, played in the film by newcomer Edward Speleers, is a 17 year old farm boy living in the mythical kingdom of Alagaësia, now ruled by the malevolent King Galbatorix (John Malkovich). Eragon’s tranquil life is disrupted when he discovers a large blue stone from which a dragon is soon hatched. The birth of the dragon, Saphira, signals that Eragon is destined to be the last of the “dragonriders” and that he possesses the magical power and courage to lead the rebels in their fight to dethrone the King. The film traces Eragon’s awakening to his fate and powers, his bonding and flying with Saphira, his instructions in sword fighting and magic by the older-but-wiser dragonrider, Brom, (Jeremy Irons), his flight from the King’s wrath, his joining the rebel forces, and his battle against the King’s army commanded by the evil sorcerer, Durza (Robert Carlyle).

Although the film struggles to be faithful to the book, it just doesn’t capture the book’s youthful charm and heart. The primary story line is announced in a voiceover during the beginning credits, so we miss the chance to have it reveal itself to us as it is being revealed to Eragon. Also lacking is the exploration of Eragon’s inner conflict over accepting his destiny. The viewer is not transported to the magical, complex and elaborate kingdom of Alagaësia of the book, but rather is merely observing action scene followed by action scene. Shortened from the book and bared on the screen, the story, its flaws and its borrowings from (or homage to) Harry Potter, Lord of the Rings, and Star Wars are more obvious.

Edward Speleers is adorable and earnest as Eragon, although when the rebels express doubt about his skill and courage, we understand why. Jeremy Iron’s melancholic Brom is convincing and empathetic, but John Malkovich’s evil king is a caricature. Can’t he find better parts these days than the stock villain he plays in too many movies?

Eragon has all the production value, scenic locations, marketing tie-ins and special effects of a big budget movie. The computer graphics, especially those of Saphira the dragon, are terrific and the scenes with Eragon riding on Saphira sparkle. Stefen Fangmeier’s special effects background serves him well in this, his first time out as a director.

To cut to the chase…’tweens and young teenagers who read and loved the book are the target audience for Eragon. And they will see it no matter what the reviews. For those who aren’t accompanying a fan, this film would be an agreeable fantasy-adventure movie, but easily forgettable.