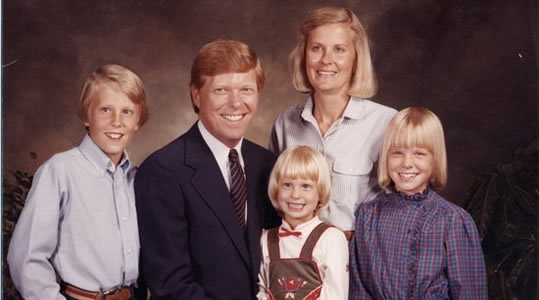 Director Daniel Karslake (PBS’s “In the Life” newsmagazine) incorporates the stories of five conservative Christian families – conservative Christian parents and their gay adult children — to dramatize the devastating impact of homophobia in the United States today. The Bible Tells Me So funnels the important insights of anti-homophobia sensitivity training, for decades a standard, often informal part of every queer person’s coming-out process, into a “how-to” film suitable for any mainstream audience, whether ignorant, indifferent, or hostile to homosexuality, with a special-case plea to stop the continuing slide into literalist fundamentalism. The message here is neither new nor even controversial, except among fundamentalist Christians. If raising comparison of Biblical literalist America today to Nazi-style fascism can come off so ho-hum, then perhaps the times are as dire as the alarmists would have us believe.

The moral core of this documentary finds its center in the story of Bishop Gene Robinson, who has now taken his place in history as the first openly gay man to be elected to bishop as an openly gay man. Raised in Missouri by conservative Christian parents, twice married, once to a woman and once to a man, Robinson’s election to bishop in the U.S. Episcopalian Church is fueling the growing rift between “inclusive” gay-supportive and conservative homophobic factions in the worldwide Anglican Communion. In interviews with Robinson, his parents, and his ex-wife “Bo,” Karslake casts Robinson’s political stance and spiritual belief as heroic, his position symbolically important on the world stage, as Christians everywhere face the greatest schism since Protestant factions began breaking with Vatican authority half a millennium ago. The terrible irony is unmistakable – today the pendulum is swinging backward, the rigid backlash consisting of outraged, hate-mongering dissenters. We live now in an era of global fundamentalism and a darkening worldwide resistance to the legacy of European Enlightenment.

The film opens by posing to several religious leaders and laypeople a simple question. The Bible, we are told, claims that homosexuality is an “abomination before God.” What is an “abomination”? – “That which elicits feelings of hatred and disgust.” Reverend Laurence Keene, a clergy member of the Disciples of Christ, dismisses this simplistic literalist interpretation and presses for a historical, contextualizing reading: “abomination” in the Old Testament refers to a “violation of a ritual requirement,” such as violating the ban among Jews on eating pork (or, say, the modern ban among Catholics on eating meat on Friday). The modern re-interpretation of the phrase, to mean that something is “innately immoral,” is applied by the literalists only to cherry-picked passages from the Bible, which correspond to actions considered taboo today. Biblical literalism, the viewer is reminded, was only invented in the nineteenth century.

Interviews include those with Gene Robinson and his conservative parents, with Tonia Poteat and her stalwartly homophobic parents, with Chrissy Gephardt and her parents (her father the photogenic media personality Dick Gephardt is a former House Majority Leader), and with others, notably Archbishop Desmond Tutu, and (gay Christian) Soulforce activists Jake Reitan and his parents. The film can be accused of “preaching to the choir,” and the culminating reportage on a protest before James Dobson’s Focus on the Family Institute suggests this documentary is intentionally partisan in support of Soulforce.org, whose stated mission is to strive for “freedom for lesbian, gay, bisexual, and transgender people from religious and political oppression through the practice of relentless nonviolent resistance.”

In our increasingly hyperpolarized times, the message, of Reverend Dr. Martin Luther King and the Mahatma Gandhi, of nonviolent resistance comes as an unsteady ray of new hope. (The homophobic backlash abroad is far more virulent and widespread than in the US.) While this documentary has been criticized for its too-predictable message, it is a telling sign of the times that so little is available in the realm of corporate-controlled mass media (the now privately owned arena of “public” discourse) to counteract daily repetitions of the Big Lie. Sadly, Jimmy Swaggert, Reverend James Dobson and their ilk receive continuous airtime, year after year, their homophobia propaganda machine never running out of funding from a gullible, if earnestly hating audience. Fortunately, Karlslake passes on lessons learned from Michael Moore’s Bowling for Columbine.

(21192)
$3.61 (as of January 24, 2021 - More infoProduct prices and availability are accurate as of the date/time indicated and are subject to change. Any price and availability information displayed on [relevant Amazon Site(s), as applicable] at the time of purchase will apply to the purchase of this product.)

(18817)
$4.89 (as of January 24, 2021 - More infoProduct prices and availability are accurate as of the date/time indicated and are subject to change. Any price and availability information displayed on [relevant Amazon Site(s), as applicable] at the time of purchase will apply to the purchase of this product.)
related posts