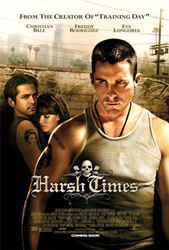 Jim Davis (Christian Bale) is a perfect candidate to work for the Department of Homeland Securities. He served as an Army Ranger in Afghanistan, he has the guts to do what it takes to serve his country, and he’s a sick fuck. Even LAPD won’t take him.

Harsh Times is a buddy film, but only in the most depressing way. Friendship for Jim and his loser pal, Mike (Fred Rodriguez), means drinking beer in the morning, cruising around LA, lying, cheating, stealing and generally having a good time. The fact that they are wearing dark suits (in between “job interviews”) only makes things more ironic.

Somehow, they keep getting off the hook. Mike’s girlfriend Sylvia (Eva Longoria) continues to believe that the guys are actually looking for work; Jim’s girlfriend in Mexico believes he will return for her, marry her, and bring her across the border to live happily ever after; even the cops and crooks they come into contact with on a daily basis seem to fall for their clean-cut charm. The audience, on the other hand, gets a look at the dark version of the American man. This film has an anti-hero. The reality that someone as sadistic and morality-free as Jim should be a shoo-in for a government job is a sad comment on the realities of our political state.

Bale, who shot this film the same year he played Batman (Batman Begins), is convincing as a white guy at home with the Latino and African-American thugs and losers in this milieu. Even more convincing is his ability to portray a psycho. Flashbacks to military service offer context for a tendency towards violence, but it is his own personality disorder, which Bale develops with particular skill, that ultimately shapes this character’s undoing.

A movie that seems gritty and pointless for its first third, begins to grow in meaning as the pointlessness snowballs into absurdity and then tragedy. These are two lost boys– but America is a land for lost boys. Lost boys can become president.