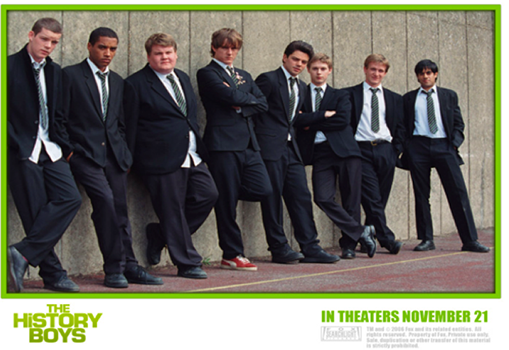 This witty and delightfully exuberant movie revolves around the scholastic future of eight gifted teenage boys in Yorkshire, England. The History Boys have been chosen to prepare for the rigorous examinations in history required to get into the two most prestigious universities in England, Oxford or Cambridge. The “Oxbridge” exams were a national rite of passage for the brightest students before they were finally done away with. Although the movie is squarely set in 1983 and centers around the Oxbridge scramble, its themes and mood are timeless and universal. The story touches on many subjects, as any good education should, although the thematic variance may seem structurally unsound for a movie. It’s about the acquisition and use of knowledge, especially through the study of history. It is also about the vitality and arrogance of youth, and the tired wisdom of age. And it is most potently about the love of teaching, and how the best teachers can help give meaning to existence; and if not meaning in the grand sense, at least an appreciation of what it means to be human.

The story began its life as a play written by the well-known British playwright Alan Bennett and directed by Nicholas Hytner, the same team that brought “The Madness of King George” to the screen in 1994. Bennett and Hytner were so committed to bringing their original National Theatre Production of “History Boys” to the screen with its original cast intact that they filmed the screen version during the summer after its run in London and before its world tour, which included a successful run on Broadway in 2006. Their haste in creating a filmed version is understandable, since the eight boys that the title refers to are meant to be on the cusp of manhood, and the stage actors could have easily grown too old to play their roles in the movie version if they had waited for the stage production to run its course before filming.

Bennett’s foresight is to our great advantage, for the filmed version of “History Boys” contains brilliant performances from the entire cast, all of whom inhabit their roles with the ease of long acquaintance. Of the boys, it is the budding homosexual Posner (played by Samuel Barnett) and the dashing and arrogant Dakin (Dominic Cooper) who most emphatically claim their roles, especially Barnett, who has a soulfulness about him that is breathtakingly romantic.

There is the amazingly lined face and stalwart demeanor of Frances de la Tour (who won a Tony award for her role on Broadway), who plays Mrs. Lintott as a woman used to being around brazen boys and pompous male professors but whose patience hides a feminist’s rage. Richard Griffiths (also a Tony winner) brings just the right blend of irreverent humor, verbal eloquence and melancholy to the character of Hector, the General Studies teacher whose teaching methods may seem unorthodox to some, downright unnecessary to many. But Hector’s love of literature and the arts is so genuine that he actually seems to get his boys to appreciate the great works as well, or at least respect his own appreciation. They can certainly dash out a quote from any number of poet masters, not to mention whole scenes of Bette Davis melodramas, not exactly the stuff of great literature but still artistic creations of unrequited love, or love that can endure all manner of heartache—two topics Hector considers not only appropriate but vital to the understanding of life. Then of course, there are the Rodgers and Hart songs—according to Hector also requirements for any well-rounded education.

It turns out Hector is a connoisseur of life’s passions and disappointments writ down, with one unfortunate drawback. He is a homosexual who is drawn to the elixir qualities of boys in all their youthful splendor, and therefore invites himself to the occasional grope while giving them rides home on the back of his motorcycle. The boys put up with it almost as a necessary discomfort, but when the headmaster receives a complaint, Hector’s career is threatened. But Bennett’s goal is not to crucify Hector for his misdeeds, but to recognize the sadness that life encompasses, and for Hector, it’s the realization that he has missed out on his chances for love, even though there is a wife at home who, as Mrs. Lintott so caustically remarks, isn’t looking for more than a lukewarm kiss at best.

As dreadful, or as pathetic, as Hector’s conduct may appear, the movie refuses to condemn the baser outlets of such very human urges. In the end, “History Boys” is a celebration of humanity in all its guises, with a special fondness for the teachers.