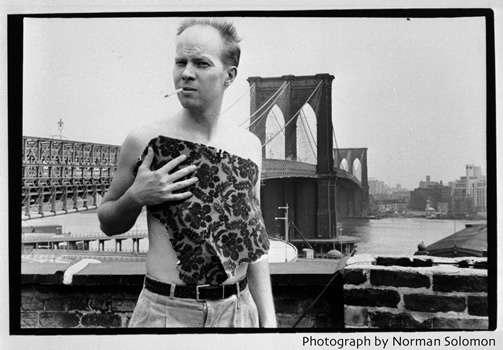 Henry Darger. That is the name that hovers behind this 2002 documentary film, How To Draw A Bunny, by John Walter, which won the Special Jury Prize at the 2002 Sundance Film Festival, and details the life and wannabe legend of minor pop artist Ray Johnson (1927-1995). For those not in the know, Henry Darger was a hermit who, upon his death in the early 1970s, became a bit of a sensation when some bad artistes found and published excerpts from his lifelong continuing novel, with collages, about a make believe planet where naked girls with penises battled aliens who did not believe in Jesus Christ. The man’s writing is uniformly terrible but, of course, the bad artistes that championed his work did so with such zeal that more mainstream and high profile artists, like singer-songwriter Natalie Merchant and poet John Ashbery, latched on to his brief flame of recognition by mentioning Darger in mediocre works of theirs.

Naturally, Dargermania faded, for the truth is there was a very good reason Darger’s fame was fleet. His work- both literarily and visually, sucked. This film tries to similarly hagiographize Johnson, by linking him with much better artists like Andy Warhol and Roy Lichtenstein, who is one of many interviewees. Yet, like Darger, the bulk of Johnson’s work was bad, really bad. Unlike Darger, however, Johnson- whose early 1995 suicide is treated as a mystery even if it seems utterly predictable given the man’s narcissistic nature, actually had some artistic talent early on, even through some intriguing silhouette portraits. Of course, it dried up and Johnson went into collage- ala Darger, which even the most jaded of visual artists will be the first to admit is the genre that frauds inevitably turn to. Why? Because one can simply toss a bunch of random ‘found’ things together, claim it art by fiat, and a bunch of clueless acolytes and sycophants, who merely ‘like’ the artist personally, and know little of the creative process and art, will later rhapsodize about his ‘pushing of boundaries’, or other such banal nonsense. Naturally, when that artist leaps off into creative nihility or bankruptcy he cannot push boundaries, for to do so one must be within the art form.

In this regard, Johnson is well in line with frauds such as Jackson Pollock and the Abstract Expressionists, the LANGUAGE poets, and dozens of other earlier –isms and Schools, which tried to substitute creative bankruptcy with hipster posing of one sort or another. When the Johnson acolytes speak reverently of his suicide off a bridge as a piece of performance art they verge on self-parody. If Walter really wanted to focus on an artist of worth who jumped off a bridge, would not the poet and critic Weldon Kees, whose death truly is a mystery, have been a much better subject?

In truth, the Werner Herzog film Grizzly Man- about a psychotic animal rights poseur who ended up being eaten by the bears he tried to ‘protect’, has much more in common with this film than any serious filmic portrait of an artist. Yes, other films like The Kid Stays In The Picture, American Splendor, Mayor Of The Sunset Strip, and Crumb have mined similar minor pop cultural veins, but either their style and format were truly provocative- as in the former two, or their takes on their bizarre subjects much more penetrating, as in the latter pair. This film fails not because Ray Johnson was a bad artist, nor even a bad ‘character’, although he was both, but because his documentarian simply had no clue as to what could drive such a small person- one with a bit of artistic talent, but a truckload of mental ills. The fact that Johnson was as easy to read as a 1960s era Sunday morning comic strip makes Walters’ filmic flaws all the more egregious, even as they recapitulate their own subject’s lack of focus. Instead of stressing the presumed worth of his art, or even the manifest ills of his mind, Walter obsesses on the trite death of Johnson, who, on January 13, 1995, was found floating under the Sag Harbor Bridge on Long Island. Walter also makes much too much of the motif of 13 in Johnson’s death- claiming the body was found near pier 13, Johnson was 67 at his death- add the digits, his motel room was 247- add again, and so on. He also seems to fetishize Johnson’s list of arts world associates found in his notebook listing their addresses and phone numbers- people like Chuck Close, Christo, Willem de Kooning, John Cage, Merce Cunningham, Robert Rauschenberg, and Jasper Johns.

Even worse is the scoring of this film, with a too trite jazz score featuring the cymbal brushwork of drummer Max Roach. The lone saving grace of the film is its relative brevity at ninety minutes. The rest of the DVD features are not worth much, either. The deleted interview scenes are no more illuminating than those in the film- one of which includes photographic artiste Norman Solomon- whose idea of ‘cool’ is being interviewed with sunglasses that have white paper binder reinforcement circles on them; a snippet on the Ray Johnson Memorial Show that is rather pointless; a photo gallery which only highlights how little Johnson achieved; and a commentary track by Walter and producer/cinematographer Andrew Moore which is another in a long line of self-indulgent DVD commentary tracks that say nothing and do so poorly. It neither adds to the film nor its subject.

Yet, it would take a great filmmaker to make such a trite life interesting. Johnson’s idea of wit includes apothegms like, ‘Keir Dullea, gone tomorrow,’ and his idea of ‘art’ includes Xeroxed grotesques of bunnies with his artsy pals’ names on them, and collages called moticos- which lack any of the inventiveness or savvy of contemporaries like Warhol or Lichtenstein. Johnson’s idea of ‘political commentary’ is images of celebrities as famous as James Dean and Elvis Presley, and as bizarre as Shelley Duvall- yet all adorned with Lucky Strike cigaret logos. The older he got the more seemingly demented and deluded he got. This is evidenced by such acts as letting a gullible acolyte videotape him doing nothing for several years, or dropping sixty foot long hot dogs over Riker’s Island from a helicopter, or Magic Marking a cardboard box, then hopping about it on one foot while beating it with a belt. Of course, in the end, that old cliché- the death obsession, got to him, as it does so many wannabe artists who really masque their mental ills with their pretensions.

Still, his gay lover and friends, like artist Jean-Claude (wife of Christo- the noted ‘wrapper’) ask such queries as why his work was not ‘recognized’ with a straight face, even as she and the others all speak of how ‘nice’ and ‘honest’ a guy he was because they simply have no way to realistically declaim his ‘work’ as having any real artistic value. Praising the person when speaking of an artist is always a giveaway as to the artist’s lack of talent and accomplishment, much as is talking of the artist’s ‘intent’, rather than ‘accomplishment’. In this sense, Johnson was actually closer to a pre-Keith Haring Haring than a Henry Darger, much less an Andy Warhol- who, despite his persona, was an artist of- if not the first rank, certainly the second. Johnson was merely a mental case with some vague creative impulses, who never quite got his mental act together.

The fact is, as mentioned earlier, that one cannot truly push an art’s boundaries if one leaps wholly outside of it, and one’s work has no real nor direct relation to its claimed art form. True originality comes only from within, and the multifarious ways that great artists use and reuse existing forms in new ways to achieve their ends. Simply put, Ray Johnson was neither good nor original. All that he did in his ‘art’ was done before and better by others. That the same can be said of his documentarian’s film may be a small synchronicity, but that’s all it is. What it is not is art.