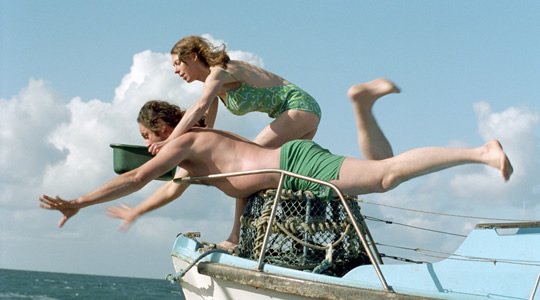 Two iconic images in film. Buster Keaton stands on a street in front of a building under construction. When the front of it falls on him, he remains motionless, happens to be standing where a window would be, and so he is not flattened. His stone face, frozen and implacable, absorbs all of it. The second image is really a hundred images. Charlie Chaplin’s fists moving at lightning speed as he harmlessly pummels a villain. Or in fleeing from a gaggle of bad guys, his upper body goes in one direction while his lower body attempts to move him in a different direction. Keaton’s and Chaplin’s bodies vacillate between absolute stillness and frantic motion. And watching them, we’re less inclined to howls of laughter than a stunned, gasping delight in seeing their physicality survive catastrophe.

Three Belgian comedians have made the closest thing I’ve seen to a 1920’s silent comedy since, well, I was a kid watching silent movies on television. Fiona Gordon, Dominque Abel, and Bruno Romy formed a writer-actor’s collective over ten years ago. They’ve performed live, made short films, and done television. All have a background in theatre and the circus. They’ve studied motion and dance. And it shows, though not simply in the elasticity of their bodies, a la Jim Carrey. They use their bodies to create and convey exasperation, desperation, stoicism, and resignation in ways reminiscent of the silent screen clowns.

The film is a shaggy dog story, and the plot, what there is of it, is in the service of the comedic moments. A middle aged wife and mother of two manages a fast food restaurant. One night she accidentally locks herself in the freezer. Liberated the next morning, she is doubly transformed by the experience. She finds herself obsessed with all things cold: refrigerators, snow, polar bears, and especially icebergs. And she returns home to discover that her family never missed her. So she abandons everyone and sets out on her quest to find the elusive iceberg. Her husband, realizing that he loves and needs her, tries to find and win her back.

"L’iceberg" looks like it was made for $273- not because little attempt has been made to obscure shabby sets, as those shabby sets are part of the gestalt of the film’s world. These characters are everyman and everywoman- every one of them somewhat lost but now determined to find happiness. But we don’t really care if they do. We don’t care that everything looks cheesy. We don’t care that the camera almost never moves. We don’t care that shots are often two minutes long, and consist of a solitary character attempting something you and I could do easily, but the character’s physical grace turns it into a dazzlingly impossible task. In stillness and frantic movement these characters somehow survive and endure. We aren’t laughing out loud. But we are staring in stunned gasping delight.