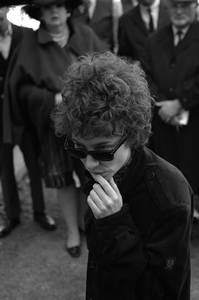 Maybe you remember a group of Bob Dylan interviews and press conferences from the early and mid 1960’s. Some straight looking and earnest reporter would ask him about the "meaning" of one of his songs. Or his political "agenda." Or how his music related to "protest" movements. Sometimes Dylan was evasive and might respond rhetorically, "What do you mean by ‘meaning’?" Sometimes he would be flippant and pretend that the question was absurd. Sometimes his voice dripped with hostility and venom as he lashed out at his interlocutor. But all of his reactions reflected one of the least attractive aspects of Dylan- a kind of reverse elitism that demarcated those in the know from those who weren’t; and relegated the uncool and unhip and un"getting-it" to some purgatory where they could "get out of the way if you can’t lend a hand" until after the revolution. The important point is that the recipients of his scorn actually were not his enemies. Those who hated him and what he espoused and represented had no desire for a dialogue. The "squares" that he castigated were usually well meaning and curious people- simply trying to understand and explain exactly how the times they were a changin’. Though Todd Haynes’ fascinating failure of a film on Bob Dylan doesn’t drip with scorn for those who aren’t in the know, it certainly has little interest in engaging them.

It’s not surprising that Dylan chose Haynes to be the first director to make a movie about him with full access to his music. Haynes has a wonderfully creative conceit for thinking about Dylan during the decade from the late 1950’s to late ’60’s. How many Bob Dylans existed in records, in concerts, in movies, in magazines, and in the heart of the zeitgeist? Haynes wants to explore six of them: Woody (Marcus Carl Franklin) a young black boy as Dylan the purveyor of the traditions of Woody Guthrie; Jack Rollins (Christian Bayle) as Dylan the singer-songwriter of protest and, late, Christian music; Arthur (Ben Whishaw) the Arthur Rimbaud-Dylan of ironic wit, absurdist humor, and poetic imagery; Jude (Cate Blanchett) as the Dylan whose electric guitar infuriates the folk purists at Newport in the summer of 1965 and later in a series of London concerts; Robbie (Heath Ledger) as the Dylan who makes a hash of his love life and whose radical politics have not been touched by feminism; and Billy (Richard Gere) the Kid- as Dylan the western desperado of a bad Sam Peckinpah movie and the excavator of the country roots and motifs in his music. It’s a terrific idea. Six fine actors explore six facets of the man and the phenomenon.

The problem is that each performance shows us something of Dylan without illuminating it. So, it’s lots of fun to see the gifted Cate Blanchett being Dylan and seeming both delighted and wearied while tweaking the noses of hide-bound folk purists and journalists. And Marcus Carl Franklin’s and Christian Bayle’s Dylans are equally enjoyable to watch because of the talent of the actors, the wonderful Dylan songs they play, and the creative cinematography and editing of their sequences. But for each fun and talented Dylan, a dreadful Dylan looms around the corner. Usually captivating Heath Ledger simply rants and postures as obnoxious-sexist Dylan, and Charlotte Gainsbourg- as his truest love and mother of his children- manages to be both ethereally inaccessible and grating- not an easy thing to do. Most off-putting is Richard Gere as Western Bad Boy Bob Dylan, who smirks his way through endless scenes in clichéd yet grotesque frontier towns with gosh darn good folks fighting Lionel Barrymore/Mr. Potter/snidely Whiplash villains.

But whether entertaining or annoying, none of these Dylans really has anything of interest to say about the real Bob Dylan. I liked this post-modernist sensibility that eschews any master-narrative of his life and career or over-riding interpretive framework to make sense of his psyche. That’s fine. Give us Dylan in fragments. And the whole need not be greater than the sum of its parts. But the parts still need to have discrete insights of some kind. And they don’t. Instead, in the tradition of Bob the Snob, they are rooted in arcane knowledge of Dylanology. I probably know more about Dylan than the average movie-goer, so I earned quite a few "aha" chuckles. I could pat myself for getting the allusion of a scene. How cool am I? But of course there are numerous Dylanologists who could give themselves exponentially more "aha" pats on their backs.. How much cooler are they? And for most of the people who simply love Bob Dylan’s incomparable music but have no esoteric knowledge of him- well, too bad. They’ll miss the movie’s clues and winks and nods to the mavens. They won’t understand the chuckles of the Dylan initiates. And so they’ll leave the theatre having enjoyed the music, curious about some of the Dylans, bored with others, and mostly shrugging their shoulders.

Alas, this isn’t the first time that writer/director Haynes has created a film with a stunning conceit that never reels in its audience. Velvet Goldmine (1998) attempted to explore the theatricality, sexuality, hype, and illusion of 1970’s glamrock. It looked great, had a fun way to dive into the moment and its sensibility, and yet never found a way to engage us as anything other than sociological observers. Far From Heaven (2002) was an even more ambitious and more perfectly realized film. Creating a Douglas Sirk melodrama, it depicted the race, class, and sexuality taboos that festered barely beneath the surface of 1950’s America. While brilliant in its reconstruction of that genre, its lack of irony or absurdity meant that it seemed arch, mannered, and stale to all but a few film aesthetes who could revel in its perfect form. And I’m Not There has the most inspired and suggestive conceit of all Haynes’ films. But for some reason, the creative creator of film ideas, with a technical proficiency second to none, has yet to give us a film that fully engages us except as admirers of his undeniable cleverness and talent.