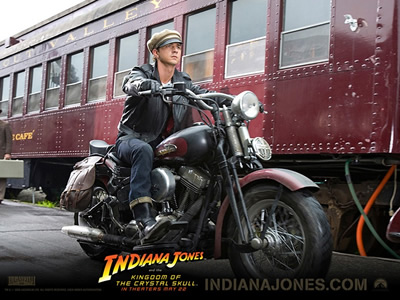 I saw a screening of Indiana Jones and the Kingdom of the Crystal Skull at a great 1920’s filmpalace, San Francisco’s Castro Theatre. When the organist rose from the pit and played the Indiana Jones theme song, the usually blasé press corps and their guests clapped and whistled. And the movie hadn’t started yet.

Paramount Studios and the Spielberg/Lucas/Ford team should be grateful that The Kingdom of the Crystal Skull’s audience is pre-programmed to sit back, snarf up popcorn and relish the film, because, absent that, the $185 Million sequel would be judged as entertaining, but less than inspired.

The movie is set in 1957, making it nineteen years since Indiana Jones and the Last Crusade. The real-time passage of years between films permits Harrison Ford to look his 65-year-old self. But now Indiana Jones is less the smiling swashbuckler with snappy one-liners and more the frowning professor with a grouchy attitude.

The film opens with a Southwestern desert action sequence in which Jones and his new sidekick Mac (Ray Winstone) are captured by the villainess, Irina Spalko (Cate Blanchett) and her Soviet cohorts. They are taken to a vast storehouse full of dusty crates reminiscent of the warehouse in The Raiders of the Lost Ark. Indy is forced to locate a mysterious crate that he had found there years ago.

Indy escapes and eventually returns to teaching at Marshall College. McCarthyism then rears its menacing head and Indy is suspended from the college for having “consorted” with the Reds. To an audience who was born well past 1957, the mention of the injustices of McCarthyism is a welcome history lesson about an important subject.

Shaped by an extinct super-race, aliens, gods or other supernaturals, the skull has otherworldly telekinetic powers and radiant psychic energy that erupts from its eye-sockets. In other words, Indy’s archaeology meets Gurdjieff’s and Castaneda’s extraterrestrial fantasies.

Indy, Mutt and Matt travel to Peru in search of the City of Gold, where they find themselves again battling the nefarious Irina Spalko and the Soviets who want the power of the skull as an advantage in the Cold War.

Along the way, Indy and the gang encounter poisonous scorpions, man-eating ants, a sinking sand pit, snakes, murderous natives, mad monkeys, and subterranean perilous tombs full of skeletons, mummies and gold. They duel with the Soviets on jeeps while careening through the rain forest, and they fall down three breathtakingly enormous waterfalls. And although their adventures are exciting to watch, they are simply variations on the well-trod Indiana Jones action theme.

Harrison Ford played a passable Indiana Jones, but he seemed to have lost his joie de vivre. LaBeouf is a talented addition to the cast and breathed some life into the movie. We’ll see more of him in future Indiana Jones movies. Cate Blanchett melded into her character of Irina Spalko. She did such a fine acting job that it was difficult to recognize her.

The Kingdom of the Crystal Skull is attempting to keep its fan base happy by retaining the style, plot devises and characters of the earlier films, but this inevitably makes the movie less innovative. And although it is an enjoyable fast-moving adventure movie, it did seem as though I’d seen it before.

In researching The Kingdom of the Crystal Skull for this review, I came upon some trivia/gossip that may be of interest: