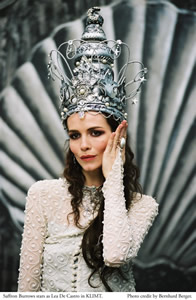 Written and Directed by Raoul Ruiz

Fans of John Malkovich will get immense pleasure watching the insolent actor portray Gustav Klimt in this biopic of the fin-de-siecle Viennese artist. And fans of the famously unconventional director, Raul Ruiz, will be equally rewarded with another of his surreal and intellectually challenging cinematic experiences.

Those who are sticklers to classical realism, however, will find this film a brazen debauchery of biography. And certain fans of the painter Klimt, certain very romantic young women who respond to the painter’s decorative and erotic inclinations—girls who have posters of Klimt’s most famous painting, “The Kiss,” on their dorm room walls, for example—will find Ruiz’s film maddeningly complex. They may not yet have the necessary intellectual chops to comprehend all the thematic nuance and cultural references that make this film so rich and entertaining. For these potential viewers, who are either seeking a textbook account of his life, or an emotional response similar to the response they get from gazing at Klimt’s art, this film will not only make no sense at all, it will frustrate to the point of exasperation.

So, to be clear from the outset, Raul Ruiz did not set out to make an exact rendering of Klimt’s life; his interests could never be contained within the confines of a straightforward biography. He offers instead a fantastical portrait (Ruiz calls it a phantasmagoria), a series of musings inspired by the artist at a certain period in his life, the years after achieving fame and up to his death in 1918. The film starts at the end, with Malkovich, as Klimt, on his deathbed, in the last stages of syphilitic dementia. In his delirium, Klimt mumbles the word “Flowers,” the filmmaker’s nod to the opening scene in “Citizen Kane,” when Kane utters the mysterious word “Rosebud” on his deathbed. From this already flagrant deviation from historical fact (Klimt died abruptly, of a stroke, and there is no account of his last words), the film proposes to cinematize what appears to be Klimt’s visions of memory, starting with a pivotal point in his career when the painter is toasted in Paris as the Art Nouveau movement’s leader.

Right away, Ruiz immerses us in the philosophical arguments that dominated intellectual conversations at the beginning of the 20th century, a time of turbulence and transition. The Industrial Revolution was in full swing, Marxist ideology was insinuating itself, and the upper classes were recognizing that their dominance in culture and politics was being threatened by a wave of revolution. Ruiz offers some witty repartee on the topics of Art and Beauty as Klimt and his peers argue their points within the rarefied sanctuary of the 1900 World Exhibition in Paris. The men debate whether Beauty is mere ornamentation, or whether it is a thing’s function that makes it beautiful—the Marxist, and early modernist, claim that Beauty exists only as the expression of an object’s usefulness. Ruiz argues each side of the debate in so many fascinating ways that it’s hard to keep up with his mental gymnastics. By the time Malkovich picks up a piece of elaborately decorated cake and smashes it in a critic’s face, this use of the ornamental dessert as a tool for humiliation helps turn the idea of “usefulness,” and by extension the debate about the nature of Beauty, on its head.

The movie is full of Ruiz’s surreal meditations on the era’s movement towards modernism and the fin-de-siecle’s rebellion against Victorian stiffness. There are a few scenes involving the birth of cinema, where Ruiz plops the filmmaker Georges Melies into the plot in order to play with how that 20th century invention adds another layer of artifice to reality, and thereby calling into question the very meaning of what is real. This may all sound boringly philosophical, but with Ruiz directing, philosophical inquiry is a not an end in itself, but a springboard for the imagination, and for humor. In one scene, there is a street brawl between men wearing top hats and men wearing bowler hats. By the next scene we see that the bowler hats have won, for there isn’t a top hat in sight. The upper class elitists have surrendered their influence, and the symbol of modern egalitarianism, the bowler hat, has taken over. It’s a clever visual riddle that in a way recalls the writer Lewis Carroll. Carroll was also a great imaginative thinker who preferred to clothe his intellect in stories that would amuse a young girl. Ruiz’s audience is decidedly adult, but he aims to entertain nonetheless.

For all its concentration on themes and ideas, the movie does have a story, and here Ruiz has said he took the writings of Arthur Schnitzler to inspire his narrative. Schnitzler was a Viennese playwright and novelist who lived during Klimt’s time, and his stories were considered shocking in their descriptions of sexuality and erotic experience. (One of Schnitzler’s stories was the basis for Stanley Kubrick’s last film, “Eyes Wide Shut.”) Ruiz structures his film along a central storyline involving Klimt’s obsession with a woman he meets through Georges Melies, a mysterious beauty named Lea de Castro, whose sexuality and unknowablility capture Klimt’s attention. Klimt’s love of women was a central influence on his art, which was very sexual, devoted as it was to the celebration of the female body. But Ruiz’s decision to demonstrate Klimt’s sexual nature through the prism of Schnitzler’s own sexual extravagance feels wrong somehow; it takes the film places that feel unnecessarily kinky.

Some will find the casting of John Malkovich to be a woefully wrong choice to play the refined Austrian who was, if nothing else, a man of his time, a Viennese gentleman. The iconoclastic actor has never stooped to the journeyman task of simulating an era through voice, or even gesture—at least not without suggesting parody. Much like Jack Nicholson, it is John Malkovich you will get, no matter what the role. In this case, in the hands Raul Ruiz, Malkovich probably inhabits the role as well as anyone. With all the sardonic quips Ruiz has written for Klimt to speak, who but Malkovich could deliver such verbal wit with so much languid self-possession. Malkovich has always seemed just slightly exasperated with morality, and here it is fascinating to watch him portray an artist who flaunted the societal limitations that might repress his creativity. In capturing Klimt’s attitude towards the naysayers and critics, both modernists and the entrenched status quo, Malkovich’s performance is exceptionally gratifying.

Among the other performers, Stephen Dillane stands out as a ghost who periodically appears in Klimt’s fevered imagination as either a minister of culture or a minister of finance, or a doctor administering to Klimt’s illness. Nikolai Kinski has a small but effective role as Klimt’s friend and colleague Egon Shiele. Kinski’s harlequin-like performance is a tiny masterpiece of physical acting. Egon Shiele bookends the movie with his visit to Klimt on his deathbed, and it is Shiele who provides the answer to the riddle of Klimt’s whispered utterance of the word “Flowers.” It turns out that, unlike the realization at the end of “Citizen Kane” that “Rosebud” was in fact the name of Kane’s childhood sled, there is no such epiphany about the word “Flowers.” The word has no “usefulness” as a symbol of anything; Klimt was merely referring to flowers, for him a manifestation of Beauty.

Among the women, Saffron Burrows looks dead in the role of Lea de Castro. Veronica Ferres is more seductive as Emilie Floge, the fashion designer who was Klimt’s companion and business partner. She also has an uncanny resemblance to the dark beauty that Klimt immortalized in the famous painting bearing her name.

In the end, though, the film’s biggest star is Raul Ruiz himself. His playfully absurdist humor and his intricately layered imaginative powers make “Klimt” a kaleidoscope of visual tricks, bizarre juxtapositions, word play and double entrendres. In the hands of this extraordinary artist, “Klimt” is a feast for the eyes and the mind.

(2372)
$0.01 (as of January 25, 2021 - More infoProduct prices and availability are accurate as of the date/time indicated and are subject to change. Any price and availability information displayed on [relevant Amazon Site(s), as applicable] at the time of purchase will apply to the purchase of this product.)

$12.40 (as of January 25, 2021 - More infoProduct prices and availability are accurate as of the date/time indicated and are subject to change. Any price and availability information displayed on [relevant Amazon Site(s), as applicable] at the time of purchase will apply to the purchase of this product.)
related posts