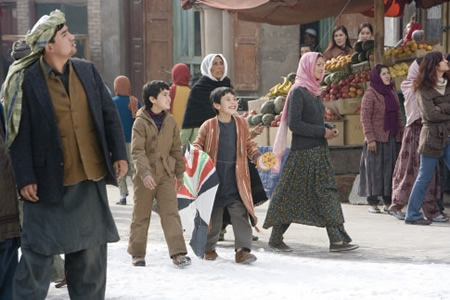 Written by David Benioff, from the novel by Khaled Hosseini

Khaled Hosseini’s debut novel “The Kite Runner” spent a whopping 130 weeks on the New York Times’ Bestseller list. I haven’t read the novel, but I can understand its success after seeing this remarkable screen adaptation. The story of a young man who is given a chance to do something over again, to rectify in adulthood a bad deed he committed as a child, is something we all wish for ourselves, something we all can relate to. It’s a comforting thought, the belief that “there is a way to be good again,” as the story says.

Besides its positive message, “The Kite Runner”’s vast appeal comes from its compelling story, which spans several decades and encompasses major historical events that took place in Afghanistan, where much of the story is set. Although it’s about the fate of a country and its refugees, it’s also a very personal story that leaves us satisfied at its harmonious end, while carried away by its complexity. This is no experimental tale, but a gripping yarn, and the issues it confronts are complicated ones, with many sides. It’s about a father-son relationship full of love and tension, it’s about betrayal in friendship; it’s about facing your limitations, as well as rising above those limitations. It’s about personal integrity versus loyalty, ethics versus individual responsibility. And it expresses the full range of human emotions: jealousy, shame, anger, guilt, fear, love and regret.

The story revolves around two boys, Amir and Hassan, a boy and his servant living in Kabul, Afghanistan, and how their friendship is torn apart by the brewing ethnic rivalry that eventually subsumes the country and leaves it defenseless against the Soviet invasion and later, the rise of the Taliban. During Afghanistan’s war with the Soviets, Amir and his father finally flee the country and immigrate to America. Many years later, Amir gets a call asking him to go back to his country, which is now under the harsh rule of the Taliban, to try to find Hassan’s son.

Back in the 70s, Kabul was a vibrant city embracing western influences among its secular upper class. Amir is a young boy whose father Baba, a widower, is a wealthy businessman whose political ideas and secular beliefs are at least tolerated by the conservative majority, and they live a relatively tranquil existence. These are happy times for Amir and Hassan, but the signs of trouble are there, smoldering underneath the surface.

The movie begins with a kite-fighting contest, a beloved tradition among children in the Kabul of 1975. It’s a fierce competition and a battle of skill that pits gangs of children against each other, and you immediately get a feeling of exhilaration, but also apprehension, when you see these children yelling and running, urging the kite flyers to cut the strings of their opponents’ kites by the sheer force of their own kite strings. (The movie is vague about just how the strings can cut; the novel more explicitly describes how strings are coated with cut glass or aluminum.)

The competition is about catching fallen kites as well, and the kite runners, as they are called, are just as important. Hassan, Amir’s Hazara servant and his best friend, is the best kite runner of them all, and Amir, the story’s main character, is no slouch at kite flying himself. At the movie’s beginning, these two boys are like a yin and yang force against the world, and it is Amir’s betrayal of that bond that is the catalyst that destroys their friendship and sends both boys to their separate fates.

Because the story traverses three distinct periods in the life of an Afghan family—specifically a westernized one that we Americans can more easily connect with–it is a vital and engaging history lesson in the plight of Afghanistan today. It not only gives a human face to those who escaped the country and immigrated to America, but to those who stayed as well. It’s a way to educate American audiences about a culture that we are politically involved in but otherwise know very little about. It’s much like the French film “Persepolis” that also came out this year, in which an Iranian immigrant recounts her own childhood in Tehran, and how Iran’s revolution affected her own family. Movies can open doors to understanding, and for that reason alone, “The Kite Runner” is essential viewing.

Kahled Hosseini, the novel’s author, has praised this film adaptation; you definitely get a sense of the extreme care that was taken in translating the story to the screen. The movie feels authentic, not a Hollywood makeover. Not too long ago, such a story would have been translated to the screen in an English-only adaptation; the novel is written in English and such an adaptation would have been commonplace just a few years ago. But thanks to the visionaries behind this film, every attempt was made to make the portions set in Afghanistan as realistic as possible, and that included writing dialogue in Dari, a dialect of the native language, and finding locations along the Chinese border of Afghanistan that most closely resembled the Kabul of the 1970s (shooting in Afghanistan was out of the question). They also cast Afghan boys, including the two leads–both Zekeria Ebrahimi, who plays the young Amir, and Ahmad Khan Mhahmidzada, who plays Hassan, deliver unforced, realistic performances.

Unfortunately, the desire for authenticity has come with a price. Since the movie was shot, Afghanistan has experienced an escalation of violence, and the child actors have since expressed fear of reprisals for their involvement in the movie. The film’s release was even delayed so the film’s distributor, Paramount, could help four of the child actors leave the country. For now, the boys have been relocated to the United Arab Emirates.

The boys have noted the film’s harrowing (though not explicit) rape scene in their explanations of why they fear for their safety. Whether or not the risk is real, or whatever the specifics of their anxieties, it remains true that the Islamic extremists who formed the Taliban are depicted as brutes. There is a scene of a woman’s stoning, and the movie implies that the Taliban at least tolerated sexual deviance among their ranks. The U.S. may have ousted the Taliban from the government, but the Islamic extremists are still around, and I can’t imagine them being too happy about this movie.

Nonetheless, the casting of these two boys has given us two powerful performances, especially Ahmad Khan Mhahmidzada, who plays Hassan. His face exudes such a mournful quality; it looks like it has been created out of centuries of strife and endurance. Although he plays a Hazara Muslim who has been raised according to the scriptures of Islam, he reminds us of a Christ figure. Ahmad Khan Mhahmidzada embodies the character of Hassan so completely, a religious person might think it was his destiny.

Iranian actor Homayoun Ershadi (“A Taste of Cherry”) also stands out as Amir’s father; he brings a complex character to vivid life in another naturalistic performance. His transformation from a vibrant intellectual to an old immigrant gas station attendant is a remarkable bit of acting. Only Khalid Abdalla (who played the lead terrorist in last year’s “United 93”) misses the mark in a difficult role as the adult Amir. The movie’s one major weakness is in its depiction of Amir’s own transformation into a man of integrity and courage—what his father had always seen lacking in him as a child. The actor makes the adult Amir look too soft, too mellow, and it makes his scenes facing the Taliban feel like a contrivance.

David Benioff’s script is tight, and Marc Forster’s direction is solid. Forster, who demonstrated an intelligent sensibility and a gift at encouraging brilliant performances in “Monster’s Ball,” has turned Hosseini’s best-selling novel into an equally powerful film. We can only hope that his efforts, as well as Hosseini’s, will help foster peace and understanding…a way to be good again.