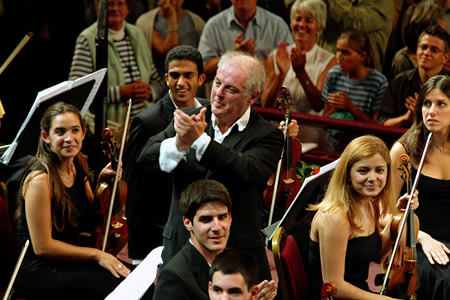 The Israeli-Palestinian conflict is routinely described as the most intractable conflict in modern times, and both sides are just as routinely described as hating each other, which of course results in killing. So where does that leave a person of conscience? And can that person do anything to lessen the suffering on both sides? These questions drive Paul Smaczny’s powerful new documentary, and they’re essential questions because the Israeli-Palestinian conflict has been the central conflict for people of the three Abrahamanic faiths for nearly sixty years. The film profiles the efforts of two men of conscience – conductor-pianist Daniel Barenboim, who was born in Buenos Aires in 1942, and moved to Israel in 1952, and writer and Columbia University professor Edward Said, who was born in Jerusalem, Palestine, in 1932, and died in New York in 2003, who decided to do something. And what they did was found The West-Eastern Divan Orchestra at the Weimar Festival in 1999 after its director asked Barenboim what he wanted to do about music there. He says he “got the idea of bringing together Israelis and Palestinians, and in this case, of course, the other Arabs as well. “ That seemed almost impossible in 1999, and would probably be really impossible now, in the seventh year of the Second Intifada, when the facts on the ground are even bleaker for Palestinians, and spiritually devastating to the many Israelis who take no responsibility for their neighbors’ suffering.

But Barenboim and Said persisted in spite or because of all the odds against them. Yo-Yo Ma, who’s caught in several clips here, says that forming the orchestra would have taken ten or fifteen years, were it not for Barenboim’s commitment and drive, as well as the efforts of many others. Just getting the musicians to auditions must have been a logistical nightmare, and quite a number of those who made the cut – of the eighty-member band – express their hopes, fears, misgivings, and hostilities throughout. Said wisely observes that “ suffering is in my opinion the monopoly of no one, “ and Barenboim, ever the Realpolitik philosopher, is just as succinct. “ I think the only hope, “ he says to the distinguished Palestinian leader Dr. Mustafa Barghouti as they drive through the ravaged West Bank capital, Ramallah, “ is that contexts are created with people on both sides who are unhappy with the way things are, and the way things are going, and try to find a common ground. “ ( PAR ) That common ground of course is music, and yet the struggle to master it both technically, and emotionally – Said points out that Israel-Palestine “ is a very small place with an enormous number of histories going on “ ( to say nothing of the going back three millennia or more of Arab countries like Egypt, Syria, and Lebanon ) – is monumental. We see the young musicians grappling with their complex histories and perceptions of each other – the Lebanese co-concertmaster isn’t keen on his Israeli co-concertmaster’s talk of politics because he knows what Israel has done many times to his country – despite all odds. And Said and Barenboim are seen struggling too. Said, displaced from the country of his birth, and Barenboim, struggling with the professed ideals of the land he came to. These realities collide like a wallop of cognitive dissonance in a press conference he gives in Tel Aviv in which he says “ the settlements are the cancer afflicting the whole process’, and even more dramatically in his acceptance speech for Israel’s highest honor, the Wolf Prize, at Jerusalem’s Knesset, where he quotes from the Jewish state’s declaration of independence which is completely ( itals ) at odds with how it treats its Arab citizens within Israel, and the West Bank. This provokes a vociferous outburst from Minister of Education Limor Livnat, who claims she chafed at the committee’s selection of Barenboim, but went along anyway. But the musician, though obviously stung by her assertion that he’s attacked the state of Israel, defends himself by saying that he only tried to raise rhetorical questions, which he has, and most profoundly. And the fact that he’s given all the monies from the Wolf to music education for Israeli children, as well as to Palestinians in Ramallah, is an unassailable gesture of equivalent good will.

The film culminates in his orchestra’s historic concert at the Ramallah Cultural Palace in August 2005. This sets the conflict in this painfully divided land into the sharpest possible relief, with the Israeli kids being ferried into the West Bank in diplomatic cars. But the concert is a resounding success, and Barenboim’s choice of “Nimrod” from Elgar’s Enigma Variations ( 1898-99 ), has layers of meaning. Nimrod was the legendary Babylonian king – hunter who shot his arrow far into the sky – thus ambition – Elgar’s portrait refers to his friend Jager – German for hunter – with whom he discussed Beethoven slow movements many times, and Barenboim and Said also discussed Beethoven’s music together a lot. Indeed, one of Said’s late passions not long before his death – the doc’s dedicated to him – is his study of artists like Beethoven who continued to be righteously angry to the end. And though I wouldn’t describe this as an angry film, anger is never far from the surface – how could it not be ? – in Israel-Palestine. But anger turned to good account, or affirmative passions, as Barenboim says at one point, can’t help but be a good thing. “You can’t do much, but you must do something”, Gandhi said. Barenboim, Said, and his gifted musicians did a lot by forming this crackerjack group. But what sticks in the mind are the faces here, especially that of the Palestinian girl violinist Tyme who speaks so eloquently and heartbreakingly of getting rid of the mental wall which divides her from her neighbors, to say nothing of the Security Fence, Separation Barrier, or Apartheid Wall – call it what you will – which is a tragic undeniable physical fact. This is an important and much needed musical and human document.