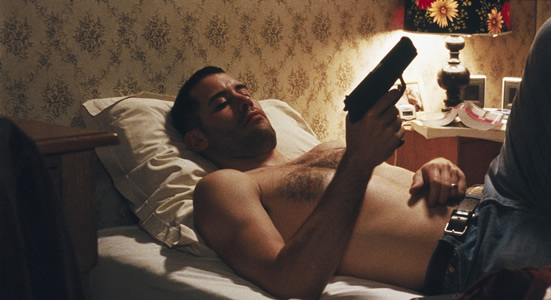 Le Petit Lieutenant is an absorbing French police procedural drama that follows the initiation of a young lieutenant into a Paris plain-clothes detective unit. Antoine Derouère (Jalil Lespert) is an amiable, naïve, yet ambitious police academy graduate from the provinces who leaves his wife and parents behind for the thrill of police work in Paris. In the early scenes, we follow Antoine as he learns the ropes, meets and is ultimately accepted by the older, disillusioned cops, catches the eye of Carolyn (“Caro”) Vaudieu (Nathalie Baye), the hardened, recovering alcoholic inspector who is just returning to the squad (shades of Prime Suspect’s Jane Tennyson). The relationship between older experienced Caro and the young, eager, handsome Antoine grows during the film, but not in the clichéd way one would expect.

Although the early parts of the film seemed slow and did not manifestly advance the plot, the conversations among the cops in the squad room, at bars and at dinner create an interest and complexity to the film that is typically missing from Hollywood detective films. We also gain an understanding of Caro and the tragedies of her life. In fact, the slow pace at the beginning of the film matches the characters’ slow pace while they wait around for a big case.

And action soon builds with the murder of a homeless man and its link to other cases involving two Russian thugs. The remainder of the film follows the squad in their attempt to solve the murder and capture the Russians. We see boring stake-outs and dead ends and realistic, unglamorous chases (no James Bond here). But then, in the last part of the film, there is a twist and a sudden and unexpected tragedy.

Also distinguishing Le Petit Lieutenant from a typical police movie are scenes that elucidate the thoughts of the characters, rather than simply expose their actions. A scene in which Antoine is visibly uncomfortable while observing his first autopsy is followed by a discussion with his father about it. Antoine says that when he saw the dead man’s organs laid out as though in a butcher’s case, all he could think of was Mozart. “How can all that stuff compose music?” How many American police flicks would express an idea like that instead including yet another unbelievable car chase?

The performances by Nathalie Baye, Jalil Lespert, and the talented supporting cast, notably Antoine Chappey and Roschdy Zem, as a cop of Moroccan origin, are outstanding, understated and believable. Nathalie Baye won a César award for best actress for her role in this film; Roschdy Zem was nominated for best supporting role. The director and co-writer, Xavier Beauvois, nominated for César awards for direction and writing, spent time at an actual Paris police squad and it shows.

Although there is not one universal definition of a noir film, Le Petit Lieutenant has more than enough of the commonly associated noir attributes to classify it as such. In the noir tradition, this is a detective story, shot with low-key lighting, using heavy shadows, using realistic camera and sound effects, taking place in a dreary urban setting. It has a somber and existential mood and contains an ending in which victory may be pyrrhic.

To cut to the chase…this is a very French, understated, intelligent, slow, police procedural that ultimately engrosses and then surprises the viewer. If you don‘t see it in a theater, it would be a great rental.