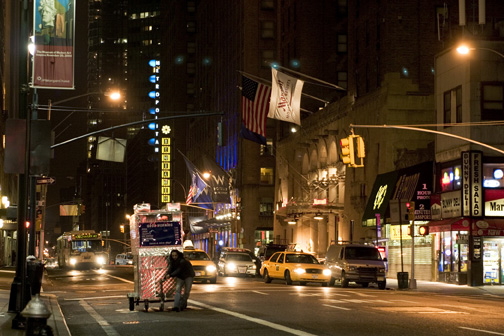 Newcomer indie director Ramin Bahrani spins a sparse tale told in cinema verité of contemporary immigrant life in Manhattan. In Man Push Cart, one-time Pakistani rock star Ahmad (Ahmad Razvi) is now a contemporary displaced person, a working-poor immigrant seeking his version of the American Dream on the mean streets of post-9/11 New York. More often than not, it seems as if it’s cart push man, rather than the other way around.

Most of the film is shot in natural night light or set in dark interiors, underlining the metaphorical dark passage of Ahmad’s aching immigrant soul. He pushes his push cart up and down Broadway like a modern Sisyphus. This seems less to atone for any monotheistic guilt (the Manhattan setting somehow enhances the common bond of its Christian, Jewish, and now Muslim newcomers), but because in the American jungle little has changed since the days of Upton Sinclair. This is still, or again, a dog-eat-dog race for survival.

In fact, the most trenchant aspect of Bahrani’s tale is how it darkly mirrors It’s a Wonderful Life. Except, despite all the sacrifices that Ahmad undertakes, despite the seeming interventions of serendipity, Ahmad is only ever brought back to where he started. He cannot afford to insure his push cart. The compatriot who did him favors wearies of Ahmad and his poor immigrant plight. The Spanish girl he meets and kind of hopes fervently to flirt with keeps turning up as the "guest" of the compatriot. Ahmad, who was once a famous rock singer in his home country, can’t motivate himself to rekindle his singing career. In the film’s low point, a masterfully deadpan nadir, the two-week-old stray kitten Ahmad had brought home becomes yet another mark of his failure in the soul-crushing new world of America.

A sad, powerful, austere experience of a movie, this is the story of a man who has known profound, compound loss. Man Push Cart is told in unadorned, unpretentious linear narrative fashion, reminiscent of Italian neorealism. It’s almost The Bicycle Thief, stripped down to an ascetically bare-boned anti-sentimentalism. This New York City could be taken as a symbolic rendering of contemporary Baghdad or Beirut just as easily. Or perhaps it’s the heart of darkness in which not only the unwelcome urban underclass lives today.