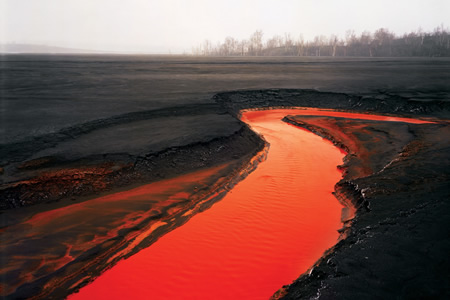 Technical expertise and even astonishing craftsmanship obviously aren’t enough to make a work of art. What else is needed? I’ve always thought that the other three ingredients were exactly what was being sought in "The Wizard of Oz." Beyond technique, art requires a heart, a brain, and the courage to fully use them. "Manufactured Landscapes" is long on heart and short on brains. The result is a technically dazzling film with its heart in the right place. But it’s just too thoughtless to become fine art.

Director Jennifer Baichwal has done a fine and creative job of presenting the astonishing photographs of Edward Burtynsky. This is the director’s second documentary on a photographer, her first being on the provocative and controversial Applachian photographs of Shelby Lee Adams. She also made a documentary about the strange and gifted writer, Paul Bowles. Baichwal knows her way around a photograph, and I have never seen anyone as creative at using a movie camera to capture a still image.

And the images of Edward Burtynsky are something worth capturing. Also a Canadian, his photographs of global industrial landscapes hang in museums from Los Angeles to Moscow. Befitting their subject matter, his works are gigantic in size. He turns his eye on the building of the largest dam ever constructed, the creation of enormous tanker ships, and the operations of one of the world’s largest industrial plants. These massive photographs are a testimony to the massive creations of which we’re capable, but also the potentially catastrophic consequences this giganticism can have on the environment.

But what do Baichwal and Burtynsky really think about all of this? Apparently not very much. The film has a romantic quality about it, an unstated but palpable dislike of modernity. But surely they want to tell us something more than: don’t fuck up the environment with new development. And this is where, like the Scarecrow that Dorothy and Toto meet, the film needs a brain.

Wisely, "Manufactured Landscapes" eschews vague, vacuous generalizations and anti-growth platitudes. But then, for example, what are we to make of the dam construction? We see that hundreds of thousands of people will be displaced. But their existing housing is wretched. They will be given better residences and probably better jobs. And the new dam will create cheaper electric power, prevent floods, and provide new and decent jobs. By almost any utilitarian calculation, this seems like a good thing. But is it?

We get the same lack of insight about a factory. Over two centuries ago, Adam Smith and Karl Marx famously described the deadening nature of factory labor . And Baichwal’s camera perfectly focuses on one worker doing one repetitive task. Initially, it’s fascinating to see her fingers flying as they assemble small plastic parts. But after a few minutes, we want to run screaming from the theatre. Imagining someone doing this alienating labor all day, day after day, year after year is difficult to grasp. But the workers seem proud of their labor and their factory. They certainly have it better than many other rural laborers around the world. And so how should we understand what we’re seeing? This generation labors so their children will have it better? The routinization of the process would feel better if the work environment or social relations of the society were somehow different? This slice of life is just part of the existential nature of industrial society? Elitism lies behind my horror at this work? Again, we’re not looking for slogans, false polarizations, and simple solutions. But instead of trivial ideas for making sense of what we see, we’re given, well, uhm, errrr,….. nothing.

That being said, Manufactured Landscapes makes for a fascinating and powerful experience. Even without offering a way to conceptualize what we see, there’s something primordially powerful about simply watching. Baichwal and Burtynsky make us aware of the how we can conceive and construct objects of gargantuan proportions. And the photographs and film are testimony to an equally impressive human capacity- to dazzle the eye with astonishing images of what and how we create.