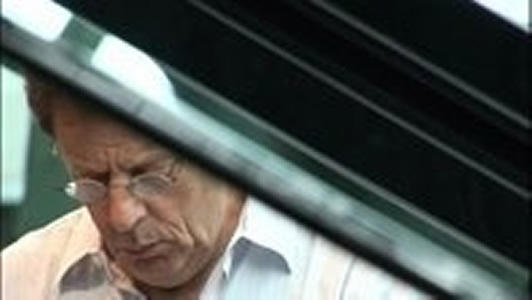 Most documentaries on composers are dry as dust and predictable. Youget the tragic childhood, the baffled parents, the uncomprehending world. Scott Hicks’ fascinating new film on Philip Glass, who turned seventy last year, avoids these time-worn clichés. Instead, it gives an up-close and very personal view of a man who lives completely inside music. Ellington used to say that “ music is my mistress and she plays second fiddle to no one “, and you could say the same thing about Glass. He’s devoted his life to something far larger than himself, and so every thing has to be secondary. That’s just part of the territory, and Hicks’ picture, culled from over 120 hours of footage, manages to give a broad and in depth view of that territory.

The director divides his film into 12 distinct but contributory parts. We see the New York-based Glass at his Nova Scotia home, which he bought with his first wife, director JoAnne Akalaitis, discussing the metaphysical ambiguities of his Symphony # 8 ( 2005 ), while making pizza for his family – fourth wife, Holly, their sons Marlowe and Cameron – and friends. Hicks’ interviews with Glass help to explain but not explain away the music. The composer’s contention that his simultaneous study in Paris with the doyenne of Western musical practice, Nadia Boulanger, and Ravi Shankar, taught him 2 different but equally valuable traditions. His statement that “ the collision of their intellects happened inside of me” is borne out in his playing of one his solo piano pieces from the set of 5 called Metamorphosis ( 1988 ), where the left hand plays the rhythm, and the right hand the melody. Of course it’s not as simple as that, but the steady rhythms, sometimes in lieu of harmonies and harmonic motion, over which melodies float, or are intercut, comes from his understanding of non-western practice, where “the drama” of a piece is integral to its internal structure, and not applied from without. And this is why his work has been so controversial. Some think it’s boring because nothing “happens” in the Western dialectical sense, while others get its “non-events” and are enthralled.

We get a ringside seat on some of Glass’ most seminal collaborations with film directors. There’s Scorsese, for whom he scored Kundun (1997), Errol Morris, for whom he scored The Thin Blue Line (1988), A Brief History of Time ( 1992 ), and The Fog of War ( 2005), and most importantly Godfrey Reggio, for whom he did Koyaanisqatsi (1983 ), and its 2 underappreciated sequels, Powaqqatsi ( 1988 ), and Naqoyqatsi ( 2002 ), undermined by their distributors unwillingness to promote them, and Anima Mundi (1992). The live wire Reggio is a wonderful contrast to the withheld Scorsese, and the dour yet controlling Morris, and he provides the deepest insight “ Eisenstein says that the epitome of the relationship between composer and filmmaker is that one should end up being able to see the music and hear the image. “

Glass’ work with “theater of images’ director Robert Wilson, with whom he’s done 5 large-scale pieces, beginning with the iconic Einstein on the Beach ( 1975 ), is barely covered, perhaps because Hicks couldn’t catch the peripatetic artist for an on camera interview. Still it’s a serious almost omission which gives the viewer new to Glass’ work, precious little insight into how Wilson impacted his musico-theatrical development : hecanalso be seen as having informed Glass’ non-linear and non-narrative way of working with time in his first “real” opera, Satyagraha ( 1979 ) which was given such s quietly spectacular and deeply moving production at The Met this spring.

Hicks is lucky to have been on the ground floor of Glass’ long in gestation opera of J.M. Coetzee’s 1980 Kafkaesque novel Waiting for the Barbarians , which got its 2005 premiere at Germany’s Erfurt Opera. Designer George Tsypin tells how the music determined his choices, and Glass says he think the most important scene in the piece is the last one, where The Magistrate ( baritone Richard Salter ) confronts his shadow self to the accompaniment of his stark and deeply compassionate music. This seems to bear out the composer’s belief that “music is like an underground river… you don’t know where it comes from and you don’t know where it’s going… What I have been content with is to see music as a mystery, and I leave it at that. “

Hicks’ doc gets about as close as one reasonably can to an enormously gifted artist who, by the sheer strength of his work, has altered our sense of what music is, Few composers have ever done that, but Glass, like the composer he in some ways most closely resembles, Stravinsky, has. Hicks’ film is a good companion to Eric Damon and Frank Mallet’s so Gallic in its precision doc Looking Glass (2003), which is much less “cinematic” than Hicks’. Theirs is much better at the composer’s revolutionary 60’s and ‘70’s work, with bits of a rehearsal of the little known but transitional Music with Changing Parts ( 1970 ), plus the extras feature an interview with Wilson, as well as a generally more serious and in depth approach to the music.