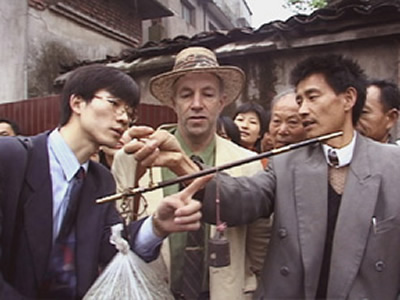 A Documentary by Les Blank and Gina Leibrecht

Les Blank has been making documentaries on his own for over forty years, doing virtually everything himself, from working the camera to editing and distributing his films from his office in El Cerrito, California. Because he has chosen the route of the true independent, he has concentrated on subjects that are dear to him, and for Mr. Blank, those subjects involve the pleasures of life. They are often about music, or food and drink, and the ways cultures and communities sustain and celebrate these pleasures. He has made films about the blues musicians from the Louisiana Delta (“The Blues Accordin’ to Lightnin’ Hopkins”); he made a film about garlic and the Gilroy, California festival that honors that aromatic bulb (“Garlic is as Good as Ten Mothers”); he made a film about beer (“In Heaven There is no Beer?”); about the beauty in women (“Gap-toothed Women”); and man’s passion to create (“Burden of Dreams”).

At just over an hour, the film covers a vast range of knowledge about tea, and makes it palatable without leaving you feeling overdosed. Everything you ever wanted to know about tea is here, but this is not a dry educational film. There is humor, breathtaking images, a look at one man’s commitment, and an interesting peek at China’s business culture to go along with the history and the politics of tea-making.

The film’s central character is the American tea importer David Lee Hoffman, a passionate and warm-hearted man who has devoted the last thirty years of his life to importing high-quality, hand-crafted Chinese teas to the United States. While doing so, he has also supported the local farmers and artisans who make the tea, encouraging their use of sustainable, environmentally sound practices for growing tea and utilizing the land.

Most of the film is footage of Blank following Hoffman around on a journey he makes to China, looking for the good stuff, trying to do business with Chinese exporters, and talking to the local farmers who still practice the art of hand-crafted tea-making. These scenes are punctuated by talking heads interviews that help give us a sense of just why these hand-made teas are so important. Along with period and personal photos overlapped with voice-over narration from Hoffman and others, the additional scenes provide the background necessary to make Hoffman’s quest to save the local tea farmers from obliteration by China’s industrialization feel vital, and they give us the portrait of a man who is more than an obsessive tea lover looking for the leaves that will make the ultimate elixir.

What we learn from all this is fascinating. We learn about the difference between green tea and black tea (black tea is when you “kill the green” by drying it more); we learn about puerhs (aged teas), Darjeeling (tea from India), and oolong (some of these plants are hundreds of years old). We also learn that a true tea lover is like a wine lover, and the search for the best tea is a bit like the search for the best wine. The descriptions of flavor are even similarly evocative. Werner Herzog, in a brief appearance at Hoffman’s Marin County home at the beginning of the film, gives the film its title when describing a particularly excellent tea that Hoffman has offered him. “I imagine walking through a forest,” he says, “and the leaves are on the ground, and it has just rained, and it’s damp and you walk, and that’s somehow all in this tea.”

Les Blank’s signature camerawork is everywhere in this film. He comes from the cinema verite style of documentary filmmaking, but his work is more reverential, less provocative than the raw “catch them with their pants down” kind of candid camera credo that drove much of cinema verite. His camera feels like a third eye, an extension of himself, and he zooms and pans so eloquently while he films that you feel like the camera has a life of its own, like an invisible ghost who is allowed to peer more closely, to smell the tea, to contemplate the face, to go in as close as a lover could.

There is a scene where David Lee Hoffman is sitting down on a couch, methodically packing tea into a bag and taping it closed while he’s talking to Blank, who is behind the camera. It all feels very impromptu, very unscripted. At one point, Hoffman falls silent while he taps the bag on the table to pack the leaves, and Blank urges him on with a short question. Blank saw the need to nudge a little, Hoffman responded, and the dance continues, Hoffman gaining momentum while Blank zooms in to his face and his hands fingering the tea he’s talking about so passionately. Les Blank’s camerawork, his unobtrusive manner, and minimal, almost invisible editing, make us feel privy to a conversation between friends. It’s all very relaxed, and pulsates with emotional power.

The film’s editing is a series of smooth, often seamless transitions, not only between shots, but also from one scene to another, from one topic to another. Gina Leibrecht is listed as the film’s editor, and she does a masterful job putting all the disparate material into a cohesive whole, without forgoing the pleasure of experiencing Les Blank’s signature images. The film is full of them, both fleeting shots and longer moments that are enhanced by movement, or stillness. Close-ups of faces, hands stirring leaves around in a wok, feet massaging tea wrapped in cheesecloth, a beautifully patterned cloth being tossed over a bowl. And there is Hoffman’s beaming face when he smells an aroma that he finds worthy of ecstasy. You almost feel like you can smell the tea yourself, and when Blank’s camera zooms in on tea leaves submerged in a glass of hot water, you almost feel like you can taste it.

This is what a Les Blank film gives you, a feeling that you are right there in the midst of it. He is one of cinema’s true artists, and “All in This Tea” is another masterpiece.