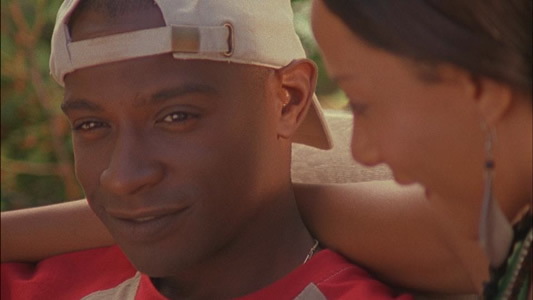 Just when we thought the topic of race in America couldn’t possibly get more complicated, along comes Barack Obama to deepen and enrich the conversation and the Clintons to flatten and degrade it. Lanre Olabisi’s maiden feature film, August the First, isn’t taking political sides. But it is part of an increasingly complex approach to the African-American family in American film.

Like many powerful dramas, the story unfolds over one day in one venue. The Ibirinde family in New Jersey prepares for the arrival of guests to celebrate the graduation of the youngest son, Trunde. The family dynamics are recognizable. An older brother, Ade, pressures and teases his younger sibling. An older sister, Simisola, seemingly has a more intimate relationship with Trunde, but she and her husband have some unspecified tension. Grandmother is testy, Mom has started drinking even earlier than usual, and Trunde’s girlfriend Elsa has her own ideas about what Trunde should do with his future. Unbeknownst to all except the sister, Trunde has added a destabilizing catalyst to the dynamics: inviting the father, Dipo, who abandoned the family years before, to attend the party.

August the First was shot in rich colors and its writer-director is Black- but this film is all about grays. Olabisi never lets us get too comfortable with our readings and judgments of what’s happening. We think we understand a character or a family dynamic, and then it deepens and alters. We can’t easily label this family as idealized or dysfunctional- it simply has instabilities and issues, like every family. Family secrets that get revealed but none that rise to the level of the melodramatic or the tragic. Some characters and relationships grow and evolve a bit, but as in real life, most change is microscopic. Its significance won’t be known until years after the film ends.

Olabisi’s and co-screenwriter Shawn Alexander’s subtle vision of a family’s aches and pains is beautifully rendered by its cast. Ian Alsup, as the graduating-from-school-and-childhood-fantasies Trunde gives a wonderful performance. He wears his aspirations and ambtions, pains and pleasures, exuberance and bewilderment on an expressive face, and then shows us how they register more deeply inside of him. D. Rubin Green creates a father who seems touching in his openness, and then peels away layers to remind us about judging books by their covers. Kerisse Hutchinson as Traunde’s conflicted sister gives the film’s most charismatic and emotionally complicated performance. And the rest of this cast reminds us of what we already know from the HBO TV series The Wire– the acting talent in Black America is bottomless and deserves radically-increased showcasing.

Olabisi’s film is not without problems; questions about some characters and relationships needed more attention. We never understand what was the pitch and timber of the parents’ relationship before it ended? How does the older brother understand and feel about his role in the family as a kind of surrogate father? Is the sister’s marriage simply about her seeking an absent father, or what else girds it? But these are quibbles. Olabisi has given us a family that feels African-American in important specificities and universal in its dynamics and struggles. It has the kind of issues that make every family, at times, a place of deep anguish. But Olabisi always eschews the melodramatic and faux tragic. Instead he takes the biggest of all risks in filmmaking- working in the gray areas. And he strides boldly and confidently into that murky territory and emerges with a powerful, entertaining, thoughtful, and deeply humane film.