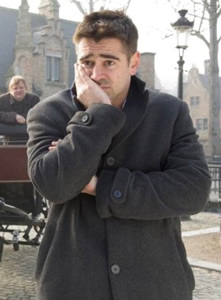 Written and Directed by Martin McDonagh

As a black comedy, In Bruges is a work of comic genius. But the movie aims beyond the scope of that genre, and so there’s a schizophrenic quality to it. It’s as though Martin McDonagh—who wrote and directed the film—sought to explore a more tragic dimension within the confines of an ultimately limiting framework. The result is such a strange hybrid of a film that it’s hard to weigh its worth. The irony is that, as I’ve contemplated this film, I’ve come to realize that it is exactly that reworking of genres and mood, that all-encompassing madness, that I found so compelling about In Bruges. So, before I try to formulate a more objective critique, I’d like to go with my gut and say before anything else that I loved this movie.

As quirky as it is, In Bruges still relies on some basic narrative conventions as it goes about subverting them to its own end. The storyline, for example, is made up of mostly familiar conceits. Two Irish hit men have come to the medieval tourist town of Bruges (a running joke is where the heck is Bruges, and the subsequent allusion to Belgian jokes) to hide out after a job in London that went seriously wrong. These two criminals are like the Laurel and Hardy of the gangster world. Laurel is the chubby, older Ken (Brendan Gleeson), a seasoned hit man who looks and acts more like a schoolteacher than a murderer. He has a taste for culture and he’d rather have a look at Bruges’ 15th-century landmarks than swig a few pints at the local pub. Ray (Colin Farrell) is his young partner, new to killing, and who lives more by instinct and emotion than by thoughtful reflection. Ray’s own first impression of Bruges is one of boredom. “It’s a bloody shithole,” he mutters to Ken, as he slouches his way through the sightseeing tours that Ken has cajoled him into accompanying him on, and then leaves him at the hotel to go out and get drunk.

The movie’s charm rests in its ability to get us to care about these two characters, and both Brendan Gleeson and Colin Farrell spark off each other so playfully and with such camaraderie that we can’t help but get immersed in their odd-couple relationship. Gleeson is quite affecting as Ken, and Colin Farrell is especially fine playing the unsophisticated, impetuous young thug with a short fuse and a big heart. His face is an amazing shape-shifter of tics and goofy looks, with those dark eyebrows and a boyishly dumbfounded stare, and he plays the fool with amazing acumen. And when the movie turns dark, Farrell expresses the utter despair of a repentant sinner with just as much ease.

In Bruges also benefits from a great performance by Ralph Fiennes, the hit men’s boss Harry, who sent them to Bruges in the first place, and then meets them there to finish business. Fiennes underplays Harry’s viciousness with deadpan composure and he milks his dialogue for all the understated humor he can find in it. When his wife asks him if it his trip to Bruges will be dangerous, he is full of seething contempt at such a ridiculous question. “Of course it’ll be dangerous,” he mutters back to her. “It’s a matter of honor.” Fiennes lets us know with every syllable he scrapes his tongue over that Harry’s idea of honor has more to do with a hot temper than a code of ethics.

Martin McDonough, who wrote and directed In Bruges, has had a highly successful career as a playwright, and his plays fall under the same rubric of black comedies. From The Beauty Queen of Leenane to The Lieutenant of Inishmore, his plays are masterworks of juxtaposing horrific and grotesque acts of torture and murder with physical comedy and extremely banal dialogue to achieve both a comic affect and a moral consciousness. McDonagh’s humor is so oddly wrought, and so revealing of human foibles, that you feel dazzled by the dialogue, while at the same time repulsed by what you’re watching. For this, McDonagh is often compared to Terry Gilliam (think Monty Python’s The Holy Grail) and Quentin Tarantino.

In his film debut, however, McDonagh has tried for something different, something beyond farce, even as he keeps coming back to it over and over, making fun of just about every culture and social propriety imaginable. Underneath all the humor, there is an imposing strain of serious drama, and even though there are moments when McDonagh effectively immerses us in that subterranean emotional torrent, he then takes us right back up, and it negates the emotion, leaving the audience confused. It all has to do with what went horribly wrong with the hit job in London, whether there’s an allowance for forgiveness, or even whether there is a hierarchical framework to the notion of sin. (Is murdering an innocent worse than murdering a sinner?) These are heady moral questions, and McDonagh seems to want to treat them seriously, but ends up channeling Peckinpah and relying on a shoot-’em-up instead.

Still, In Bruges is a work of a major talent. I don’t know how McDonagh will get around the obstacles of combining black comedy and tragic drama into a coherent whole, or whether the serious conscience that underlies all his work will ever take precedence over his sheer love of the comic, the irreverent, and the clichéd. But as I said in the beginning, in some ways, it doesn’t matter. I just look forward to seeing where he goes next.