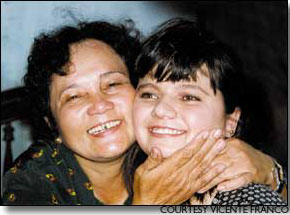 The Pulitzer Prize winning author, Richard Rhodes, once wrote &#147;If a text engages a reader, the writing becomes transparent and she enters the story as if through a window into a dream.&#148; The viewer has a similar experience in Daughter from Danang, soon forgetting she is seeing a stream of images produced by a movie projector; instead she enters the story with the events unfolding around him.

At first blush, the plot seems to have been picked up from the Anthology of Trite Situations This Side of the Atlantic. From a faraway land, a mother sends her child away to America for adoption. The child grows up as an all-American teenager but, after twenty-two years, fortuitously discovers her mother&#146;s identity and goes back home for a tearful reunion. This sketch is, in essence, the story of Daughter from Danang, but to describe the film in these terms would be doing it a gross injustice.

As the Vietnamese war draws to an end, thousands of Amerasian children (children fathered by American combat soldiers) are brought to the United States out of concerns over their security. One of them is Heidi Bub, who is adopted by a single mother in southern Tennessee. Heidi&#146;s natural mother, Mai Thi Kim, remains in Vietnam, unaware of her daughter&#146;s fate. Serendipitous circumstances and an enterprising journalist, T. T. Nhu, enable Mai to reconnect with Heidi after a gap of over two decades. Heidi travels to Vietnam and meets Mai in an emotional encounter, complete with hugs and kisses from both sides. But it is not happily ever after. Based on conflicts reminiscent of the larger divide in East-West culture, mother and daughter go through some heart wrenching decisions, almost all of which are captured live on camera.

Gail Dolgin and Vicente Franco (Cuba Va: The Challenge of the Next Generation), the directors of this engrossing documentary, came upon the story by pure chance, from a social conversation between Dolgin and Nhu. The shooting began with little time to spare; the first time the filmmakers met Heidi was the day before they all left for Vietnam. Yet, in portraying the background and the live drama of the story, Daughter from Danang is remarkably accomplished in its naturalistic visual narration and emotional power. The reason lies as much in what Dolgin and Franco don&#146;t do as in what they do. The filmmakers craftily intuit the emotional high points of the mother-daughter reunion, and by sub-titling the Vietnamese spoken by Heidi&#146;s extended family, provide an exhaustive picture of the sentiments and passions swirling around them. There are no synthetic elements here; the filmmakers know they have a great story unfolding by itself before their camera, and are careful not to cue the participants or disrupt the flow of their conversations.

Indulged by the non-interference of the filmmakers, the human drama in the film blossoms. The mother can barely speak English and the daughter&#146;s Vietnamese is equally paltry. Yet, they try to connect at the most basic emotional level, and, for a while, it works. Heidi, Mai and the rest of the family are not professional actors, but in their spontaneity, poise and lack of self-consciousness, they bring an immediacy to the film that few professionals could match. Because Heidi and her family are so involved in these events (and no one including the filmmakers have a clue about what&#146;s going to happen next), the suspense and excitement is palpable and gripping.

Daughter from Danang has been carefully tidied up by editor Kim Roberts to maintain a seamless transition from one narrative point to another. The file footage of Vietnam&#146;s children being airlifted to the United States and the montage of Heidi&#146;s initial years in America have been woven expertly into the film&#146;s narration. In the same vein, the sequence of events starting from Heidi&#146;s initial interview with the filmmakers, her in-flight time on the way to Vietnam, her meeting with Mai, and confrontations with her family flow without a hitch, as if the filmmakers anticipated every event. Towards the end, the movie delivers an unexpected wallop in a dramatic turn of events that underscores some fundamental differences between Western and Asian cultural attitudes towards familial responsibilities.

$5.94 (as of January 27, 2021 - More infoProduct prices and availability are accurate as of the date/time indicated and are subject to change. Any price and availability information displayed on [relevant Amazon Site(s), as applicable] at the time of purchase will apply to the purchase of this product.)

(2422)
$8.15 (as of January 27, 2021 - More infoProduct prices and availability are accurate as of the date/time indicated and are subject to change. Any price and availability information displayed on [relevant Amazon Site(s), as applicable] at the time of purchase will apply to the purchase of this product.)

(22364)
$3.99 (as of January 27, 2021 - More infoProduct prices and availability are accurate as of the date/time indicated and are subject to change. Any price and availability information displayed on [relevant Amazon Site(s), as applicable] at the time of purchase will apply to the purchase of this product.)
related posts