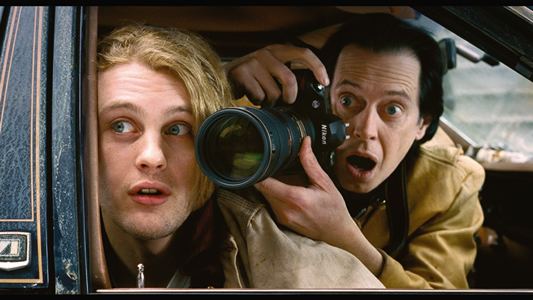 Written and Directed by Tom Dicillo

Tom Dicillo’s pointed satire about celebrity culture and the wannabes, handlers and worker bees who live at its fringes benefits from some great comedy writing, and it showcases two brilliant performances. Steve Buscemi and Michael Pitt are easily the best odd couple the movies have seen since Walter Matthau and Jack Lemon.

Dicillo has said, however, that he had another odd couple in mind when he wrote the script, Dustin Hoffman and Jon Voight. He deliberately modeled the two buddies in “Delirious” after the famous duo in “Midnight Cowboy.” Steve Buscemi, who plays Les Galantine, a paparazzo, is fashioned after Ratzo Rizzo, the character played by Dustin Hoffman, another wily street-smart guy whose tough skin hides a fragile ego. And Michael Pitt plays the gorgeous, sensitive and naive aspiring actor Toby Grace, a grunge rock/emo version of the cowboy Joe Buck, played by Jon Voight.

A homeless Toby is barely surviving on the streets of New York when he runs into Les, who is hovering with a pack of paparazzi outside a nightclub to catch a shot of pop superstar K’Harma Leeds (Alison Lohman, doing a great send-up of Britney Spears). Toby’s puppy dog enthusiasm disarms the irritable Les, who lets Toby crash at his apartment, and then keeps him on as his unpaid assistant in exchange for room and board.

The friendship that develops between these two outcasts is as touching as it is hilarious. When Les gets Toby to empty a storage closet in his junk-filled apartment, then puts a mattress in it, literally putting him to bed, his proud declaration that Toby now has his own bedroom is full of pathos as well as satirical humor. Les’s insistence on seeing the riches in rags (his apartment is full of garage sale castoffs that he calls collector’s items) is matched by Toby’s grace and simple-mindedness. This mix of personalities breeds a weird kind of compatibility that leads to some very funny scenes.

In a role tailor-made for him, Steve Buscemi gives a performance of a lifetime. Buscemi has built a career out of playing fast-talking loners who weren’t handed a silver spoon or a pretty face when they were born, and who survive by sheer bullheaded moxie, and a tough outer shell to keep out the willies and the sense of failure. Les Galantine is like that, a man whose self-importance is mostly a delusion, but it allows him to live his meager life with a sense of pride. The way Dicillo wrote him, and the way Buscemi plays him, gives us a hint that Les knows deep down that he’s treading a thin line. When Les finally gets invited to an A-list party, with Toby’s help, he ends up hiding in the bathroom, endlessly washing his hands. Buscemi plays the scene with so much pitiful nervousness that we can’t help but feel for him. Someone needs to give Buscemi the lead in a romantic comedy, the funny-looking guy whose heart is hardened by bad luck, but whose luck finally changes when the right girl comes along. Someone like Toby, only with girl parts.

As it appeared on paper, the part of Toby Grace must have felt like an impossible task. How does an actor embody the naïve innocence that seems to come from a basic lack of awareness about human nature (the role of a simpleton), but who on the other hand possesses a strong empathy towards others, and an uncanny ability to relate to people emotionally (the role of a highly evolved emotional intellect). Michael Pitt found a way, and his performance is mesmerizing. He gives Toby a sensitivity that feels so natural that it seems born from wisdom, and yet he’s able to make Toby act dim as a bulb.

Toby’s good looks and natural ease with people lead him into the arms of K’Harma Leeds, and later the arms of casting director Dana (Gina Gershon, marvelous as a sexy “mature” woman). Dana sees the potential in Toby and makes him a star…and her lover. When Toby tells her that he’s really in love with K’Harma, Dana is indignant for all of two minutes before Toby’s disarming honesty melts her anger. “You are a fucking special woman,” he says to her, showing once again that Michael Pitt can deliver a line like that and make it sound like a declaration of love rather than an exit strategy. Is this guy for real?

The movie unravels towards the end when Dicillo decides to give Buscemi’s character a vindictive edge that borders on psychosis. The plot twist threatens to turn the movie into another “Taxi Driver,” but then Dicillo ditches the idea and opts instead for a feel-good ending. But it shows that Dicillo obviously has an ambivalent attitude towards this character, one that pervades the movie and keeps it from being the lighthearted comedy it seemed meant to be. For all the insecurities, the neediness, and the self-deception, Les is really a man of little worth—he’s mean, shallow, selfish, cruel, amoral—he’s learned to survive by being tough, and he’s turned hard and sour. Buscemi’s remarkable performance manages to give us reason to feel sorry for him; even make us like Les more than he really deserves. But in the end, he’s a sad character, and making him into the object of satire just doesn’t quite make us want to laugh. It’s really hard to find someone funny when he acts so despicable. Maybe Toby can forgive and forget, but in the end, it’s hard for us to know what to feel,