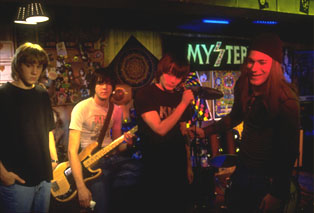 Detroit Rock City is the latest entry in a fine film genre with a distinguished pedigree: cheesy movies about rock and roll. I don’t mean genuinely good films like Hard Day’s Night or The Great Rock and Roll Swindle: I’m talking instead about irresistible junk like Beyond the Valley of the Dolls. Detroit Rock City has about the same relationship to Hard Day’s Night that its subject, bubbble-metal titans Kiss, has to the Beatles: it’s fun, silly, and really dumb.

Not that there’s anything wrong with that. The Ramones were featured in an even dumber movie, Rock and Roll High School, that stands as one of the giddy pinnacles of teenage kicks. But then, the Ramones were a great band. This matters in a film that climaxes with a concert appearance.

Detroit Rock City couldn’t be simpler. Four stoners from suburban Michigan have tickets to see Kiss in Detroit. They lose them. They go anyway, and through all their struggles to find tickets, we all know that they’re going to make it into that concert hall by movie’s end. Along the way they each meet a girl and defend Kiss’ honor against fundamentalist Moms and disco lovers. The final twist that gets them into the concert is genuinely unexpected and very funny.

It’s no insult to say that I can’t imagine a more entertaining evening for a stoned, fourteen year old Kiss fan. It’s essentially a live action cartoon peopled with comically grotesque adults–tyrannical Mom, perverted priest–out to keep our boys away from the show. Director Adam Rifkin uses frenetic jump cuts (inspired less by MTV than potheaded delayed response time) and garish camera movements to goose the film throughout. The jokes are underscored with silly sound effects. When all else fails, there’s a constant background of stoner rock classics (Thin Lizzy, AC/DC, Black Sabbath) to kick the movie back into gear.

Though the film is a Kiss vehicle, the band’s appeal lies in its otherworldliness: they wear Kabuki makeup and have outsized stage personas. (The brief, embarrassing period in the ’80’s where they dropped the makeup is conveniently forgotten by everyone–stripped of the bigger-than-life antics, they were revealed as just another bunch of over-the-hill, spandex-clad bozos, America’s own unwitting Spinal Tap.) The band appears only as the main characters’ raison d’etre until the final concert scene.

The quartet of teenaged Kiss fans thus becomes a variation on Hard Day’s Night. Edward Furlong’s Hawk is John Lennon, the smart one. Sam Huntington’s Jam is our Paul McCartney, doe-eyed, sweet and out to do the right thing. Giuseppe Andrews’ Lex is the shy, dark George Harrison stand-in, though he looks disturbingly like Dee Dee Ramone. And James DeBello’s Trip is the Ringoesque comic relief, albeit a version derived from Sean Penn’s Spiccoli from Fast Times at Ridgemont High. The performances are charming and funny.

The movie is good-natured throughout. Kiss’ trademark sexism–this band crammed an unrelenting torrent of adolescent misogyny onto vinyl–is played for laughs. The girls are given enough screen time to register as something beyond sex toys. The constant gay-baiting is less easily dismissed, though it’s also perfectly in accord with the film’s subject: our boys yell "faggot" a lot because all sixteen year old boys do so. And to the film’s credit, when we’re asked to enjoy seeing disco fans get beaten up, the targets of abuse are shown to be inarguably heterosexual. It would have been very easy for the scene to make the homophobia implicit in the late ’70’s "disco sucks" backlash explicit and ugly.

The film’s main problem lies in its music. The soundtrack is larded with "classic" Kiss songs, and yet they’re all outshone by the modest likes of Sweet and Ted Nugent. Whenever Kiss is heard, the movie’s energy flags.

The final concert is the worst example. This is a band that peaked 25 years ago, and just looks tired now. (They must be thanking God every night that they hit on the Kabuki gimmick–the pancake makeup does wonders to hide thirty years of hard living.) They’re ridiculous, yet there’s no sense that they’re in on the joke: the band never kids itself, never gives any sense that they know it’s a little unseemly for fifty year olds to scream paeans to jailbait onstage. Even a dinosaur lounge act like the Rolling Stones has the good sense to kick off its shows with "Start Me Up" these days, acknowledging the silliness of the whole enterprise. The sweetness and fun of the teenagers’ story gets lost in the wake of the band’s lame final number; one wishes they’d been fans of a better band.