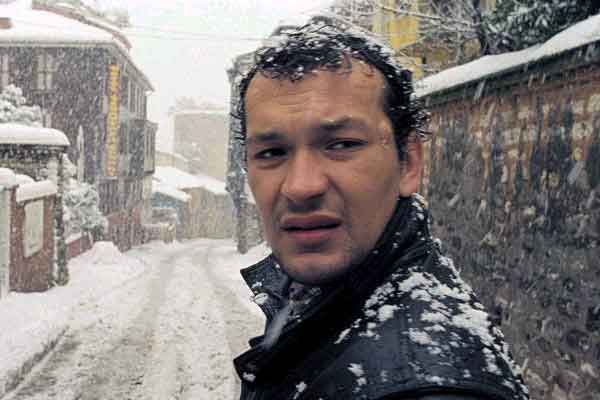 In Distant, though, there’s little chance that Yusuf (Mehmet Emin Toprak), the country mouse, will return home. The town’s one factory has closed, there are no jobs, and he feels financially responsible for the ill mother he left behind. He’s got to earn a living somehow, so he has come to Istanbul to look for work on a ship. His city cousin, Mahmut (Muzaffer �zdemir), a successful commercial photographer, out of a grudging sense of family obligation agrees to let Yusuf stay at his apartment.

Yusuf has fantasies of a good maritime life and he actively seeks employment. He also gets exposed to the impersonal nature of city life; he particularly longs to meet a woman, but he’s unable to break the ice.

In a series of small incidents, writer/director/cinematographer Nuri Bilge Ceylan slowly reveals Mahmut to suffer an advanced case of urban anomie. Divorced, he secretively watches porn and has occasional sex that seems so impersonal that his unidentified partner may be a call girl. He eats his dinners alone in a cafe and watches a lot of television. He’s very cool to his cousin and rapidly becomes obsessed with petty annoyances as the open-ended visit continues. He doesn’t have the guts to simply ask Yusuf to leave, so, with a nasty bit of manipulativeness around a lost pocket watch, he finally drives Yusuf away. Indeed, Mahmut seems perversely to drive everyone away, selfishly insulating himself from the ordinary give and take of relationships, ultimately ending up alone, staring vacantly off across theBosporus.

Other small happenings reinforce the distance that separates these men from each other and Mahmut from the rest of the world as well. The two cousins go on a photo shoot together with predictably abrasive interaction between them. A mouse in Mahmut’s kitchen annoys him out of all proportion. Mahmut visits his own sick mother in a hospital, carrying out his filial duty with a noticeable lack of enthusiasm.

Perhaps Ceylan intends a political point here, too. Yusuf leaves the farm to seek opportunities that don’t exist. Mahmut’s ex-wife (now sterile because of an abortion on which Mahmut insisted) and her new husband are emigrating to Canada. Only Mahmut stays where he is, in his empty isolation. But if Ceylan meant all this as a metaphor for the state of life in Turkey, the film is too rooted in the specifics of these characters to make a national case, while, at the same time, the theme easily fits a broader, universal canvas.

Distant plays at a glacial pace, yet it holds the interest with its gradual building of the characters of the two principals and its sustained mood. It’s a movie about what isn’t there, about what is missing The question for many viewers will be whether this skillful exposition of urban alienation offers sufficient new insight or understanding to justify a bleak and utterly joyless two hours of viewing.