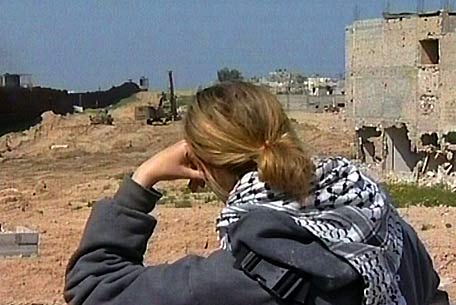 We like to think we’re on the side of the angels, and practice right action, as our Buddhist friends would say. And I suppose we like to think that we tell the most excellent of stories, as the Qur’an says in verse 3 of Sura 12, Yusuf, which conflates and completes the Hebrew Bible’s narrative of Joseph and his scheming brothers. But many contemporary stories both real and imagined seem closer to that of the myth of Sisyphus which recounts the absurdity and futility of his daily struggle — he’s condemned by the gods to push a gigantic rock up a hill which keeps rolling back on him and threatening to crush him each and every time. This is certainly an apt metaphor for the plight of the Palestinians, especially in Gaza, which the Israelis so ruthlessly savaged before the eyes of a shocked world — for 3 weeks, in December 2008, and January 2009, which is where the 23 year old American peace activist and International Solidarity Movement (ISM ) volunteer Rachel Corrie went in 2003, and where she gave her life on March 16 of that year while defending Dr Samir Nasrallah and his family’s Rafah home from demolishment by a 65 ton IDF (Israeli Defense Forces) American- made Caterpiller bulldozer. Simone Bitton’s documentary is the first film on this difficult subject, and its unblinking candor gives it its not inconsiderable power.

The complexity of Bitton’s identity — Mizrahi Jewish, born in Rabat, Morocco in 1955, she moved with her family to Israel at age 11, and studied film in France — seems to mirror Corrie’s equally privileged and diverse one — she was born in Washington state, to successful and loving parents Cindy and Craig Corrie, and knew from a very early age that all was not right with the world.  Bitton’s films have usually been about unequal realities, which the Israeli-Palestinian conflict, ignited by the fully planned, armed, and funded ’48 War ignited, certainly is. Bitton gets at the heart of this by doggedly documenting the IDF side in the Corrie case – represented by its spokeperson, the handsome but determinedly clueless-on-purpose Maj. Avital Leibovitch, who says it was just business as usual. And we get the “testimonies ” of the bulldozer’s driver and co-driver, who drag out every lame threat to Israel’s existence they can. Dr Nasrallah’s house was a safe haven, snipers were attacking them, and hey — they were just on a “grading,” the landscape mission. As if demolishing houses like the Nasrallahs’ — many in their neighborhood were and are still being destroyed  — is just all in a day’s work. Which to them, of course, it sadly is.

We get the other side of the story from on camera interviews with ISM activists like Brit Tom Hrundall, who subsequently died from an IDF shot in the head, as well as Rachel Corrie’s American ISM friends in Palestine who naturally and quite rightly challenge Israel’s party line with their eyewitness testimony — the bulldozer and its driver saw Corrie in her bright orange flak jacket and blithely killed her. With their still photos and an official IDF video — the frames which must show Corrie’s death have been carefully and dare I say cold-bloodedly deleted. Everyone who wants to save their skin always says “I was just following orders,” and the Israelis in the IDF are no different.

Bitton’s film is at its best when it just watches — the yarmulked former IDF soldier in silhouette recounting his side of his story before a window, back to the camera, images of the Caterpillar bulldozer lumbering in the dirt like some sci-fi monster-insect, and most movingly when Dr. Nasrallah tells what he saw that March 16th as he  merely paces and gestures, voice shaking, before the rubble of his unaccidentally destroyed home.

Rachel, though completely in sync with Corrie’s story, would be even more powerful if it was trimmed by 15 or 20 minutes. Documentaries, after all, should be as tightly and dramatically stuctured as a fiction film. While it’s a lot better than Errol Morris’ fancy doc about Abu Graib, Standard Operating Procedure ( 2008 ), neither is in a class with our best living American director, Michael Mann’s, just-out Public Enemies, which lasts 2 hours and thirty-three non-stop minutes. Every second was ravishing, horrifying, exciting, moving, and sometimes all these things at once. Sure, Rachel’s horrifying and a downer. But it never goes as deep as the late, great Palestinian poet Mahmoud Darwish’s poem “I am Yusuf,” which “explains” Joseph’s conflict as a fratricidal war with the self  played out between two pe0ples on one land. Or, as a wise friend of mine said to me once — “Enlightenment begins when you stop believing your story.” Meaning, that it’s the two, or rather three sides in this case — the Israelis, the Palestinians, and — the Americans — who have to stop believing in their victimhood and/or imagined superiority, and get on with the urgent business of live and let live.  Only then will we perhaps be close to being on the side of the angels.